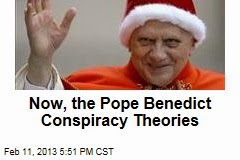 The National Catholic Register has an article on Pope Benedict's resignation as a sign of  His Holiness as  extremely brave, humble, authentic, mind-boggling; gracefully accepting of age and life beyond our roles, which you can read by pressing HERE.

But the first two comments on the NCR's article were:

Still, call me a conspiracy theorist, but but find something strange, almost radical with the changing from orthodox Benedict to Borgolio. Something seems amiss, and the "spirit of Vatican II" folks couldn't seem happier.

It is important to remember that this was the first abdication of the Throne of Peter based on old age and lack of energy in the entire history of the Church. In this sense, it was totally unprecedented. Some say he was humble in this move others say he was just a quitter. But if he did step down, why is he keeping his papal name? Why does he keep the papal cassock? Why does he still live at the Vatican? Every other pope that quit in the past based on other reasons, walked away from the papacy and went home. But Benedict did not. Why doesn't he go back to his cardinal red and head back to Germany? Finally, why was he allowed to make all these decisions regarding his residence, papal name, and papal garb? Why didn't the newly elected pope make these decisions? These are questions that will probably only be answered in the General Judgment.

My Comment: I'm beginning to wonder how many people think something is fishy with Pope Benedict's resignation. I had a humorous tongue-in-cheek post on Byzantine Conspiracy Theories of Italian origin and flavors but now I'm wondering how many people are actually wondering about it given the first two comments I post.


What do you think about the two comments above?
Posted by Fr. Allan J. McDonald at Tuesday, February 25, 2014

Perhaps, Benedict XVI was seeking an abdication from the administrative part of being Pope, and not a full abdication (hence keeping the name, etc)....which in some degrees makes sense...although he did not have to abdicatate to do this, he could have appointed someone to do the administrative half of the job. (say Cardinal Ranjith or Cardinal Burke)...and still teach and be Pope.

I must say, I've thought something was wrong with the rejoicing of the wrong people at the election of Francis...the lauding from Cardinal Mahony immediately turned me off towards Francis....(bear in mind that I'm in the LA archdiocese...and a victim of Liturgical Terrorism and that will always have an impact on me)...As I've said before, we can tell a lot about a person by who their friends are, and who praises them....Pretty much everyone who's an enemy of the Church is praising him, and this is a problem. Of course Pope Francis isn't going to change dogma (he can't), he will appoint orthodox bishops (because in short, there are less liberals left)....but the perception that he might causes far more damage than he actually could by himself if given free reign ....and given the mouth of G8....Oh boy....

Again, none of these things don't take away from the fact i believe Francis is the Pope....but I do believe there's more than meets the eye to the abdication.

Would the following be considered a "conspiracy theory"?

That Benedict resigned precisely because he realized that his age and/or infirmity deprived him of the full vigor and energy necessary to overcome the resistance to his efforts as pope that he was encountering from entrenched Vatican officials surrounding him (as well as by bishops in certain conferences). That many of these did all they could to block and even sabotage his efforts, some of them maybe working informally in concert to this end, some perhaps even hoping he could somehow be forced out, though probably never dreaming seriously that they could be as successful as they ultimately were.

Or to be a true "conspiracy theorist" would one have to envision something so quaint or crass as an explicit offer made that he couldn't refuse?

He can't go back to his "cardinal red" because he ceased to be a cardinal on his election in 2005; his place as Cardinal Bishop of Ostia was filled by Angelo Sodano. Of course Pope Francis could make him a cardinal, and I think this would be quite fitting (he is over voting age anyway). But would he want it?

I think it doesn't matter because the Church is not a democracy and there is nothing we can do about it.

I think he realized that he could not trust enough people to do the administrative things that needed doing.