POPE TO CHRISTIANS: PRACTICE WHAT YOU PREACH 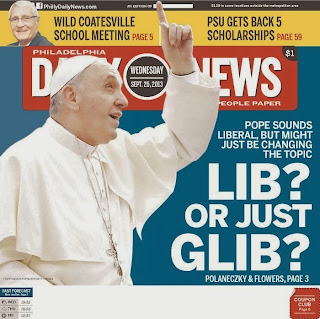 I believe the multi-national worldwide news and entertainment conglomerate doesn't know how to deal with Pope Francis. They certainly knew how to deal with Pope Benedict and Catholics were nonplussed by the media's denigration of His Holiness because the media knew that Pope Benedict did not receive the same adulation and cult of the personality acclaim as his predecessor, Blessed Pope John Paul II. Now we have a similarly popular pope, whose cult of the personality is at the same time somewhat the same but also somewhat radically different than Blessed Pope John Paul II.

It is not easy for the multi-national news and entertainment media to attack this pope and in fact they have been adoring him but through a sinister manipulation of His Holiness' words and actions and quoting His Holiness out of context.

Is Pope Francis a genius in this regard or is His Holiness simply being himself thus causing this sort of reaction amongst those in the worldwide news and entertainment industry who promote a political and moral agenda completely opposed to the Church's?

I know Pope Francis is a divisive figure for traditionalists but with the stereotypically typical  progressive, heterodox Catholics who rely on emotions to support their perspective and heterodoxy, they are down right giddy, like the liberal press. But they ignore what this Pope actually says and teaches in more formal settings while fixating on the informal things that the Holy Father does that seems to support their agenda, but does it really and just where does the Magisterium of Pope Francis really lie, in the informal or the formal, in the context of both, or in isolated cherry-picking? I report; you decide. Fair and balanced!


Pope to Christians: Practice what you preach

(Vatican Radio) The incoherent Christian gives scandal, and scandal kills: those were the very strong words Pope Francis used today in his homily at Mass at the Casa Santa Marta.

“We heard what the Apostle Saint James says to some incoherent people who boasted of being Christian, but took advantage of their employees. He says, ‘Behold, the wages you withheld from the workers who harvested your fields are crying aloud; and the cries of the harvesters have reached the ears of the Lord of hosts.’ The Lord strong. If one hears this, someone might think: ‘But a communist has said this!’ No, no, the Apostle James said it! It is the Word of the Lord. It’s incoherent. And when there is no Christian coherency, and you live with this incoherence, you’re giving scandal. And the Christians that are not coherent are giving scandal.”
Jesus, the Pope said, “speaks so strongly against scandal: Whoever causes one of these little ones who believe in me,’ even one of these brothers, these sisters that have faith, ‘it would be better for him if a great millstone were put around his neck and he were thrown into the sea.’” An incoherent Christian, he said, “does so much harm. Scandal kills.” He continued, “So many times we’ve heard ‘But Father, I believe in God, but not in the Church, because you Christians say one thing and do another.’ And also, ‘I believe in God, but not in you.’” This, he said, “Is because of inconsistency:

“If you find yourself in front of – imagine! - in front of an atheist and he tells you he doesn’t believe in God, you can read him a whole library, where it says that God exists and even proving that God exists, and he will not have faith. But if in the presence of this atheist you bear coherent witness of Christian life, something will begin to work in his heart. It will be your witness that that he will bring this restlessness on which the Holy Spirit works. It’s a grace that we all, the whole Church must ask for: ‘Lord, [grant] that we might be coherent.’”

Maybe they ignore what the Pope says because they believe, like we suspect, that it is tongue-in-cheek. Sort of like why most of us on the blog ignore Ignotus
when he talks about his own orthodoxy. LOL!

This is excellent. I like homilies that challenge me from time to time instead of those that reafirm me. We all need to look deep inside at our beliefs and how they might not be in tune with our true Catholic faith. Unfortunately, some will only hear the "communist" comment and will ignor the rest. In a similar way this is what happened with Pope Benedict whenever talked like this concering the sexual issues, some would turn him off or react with an irrational argument. Both popes have been good for us Catholics to get out of our comfort zones just as James did.
Vianney1100

I swear I think the Pope was in Publix here yesterday.
The guy looked just like him and, thing is, he was even wearing an "Italia" sweat shirt. He was also wearing a Braves cap. Frightening...

What was in his grocery cart?