IN TERMS OF LITURGICAL RENEWAL UNDER POPE FRANCIS, THE FOLLOWING IS REASSURING! 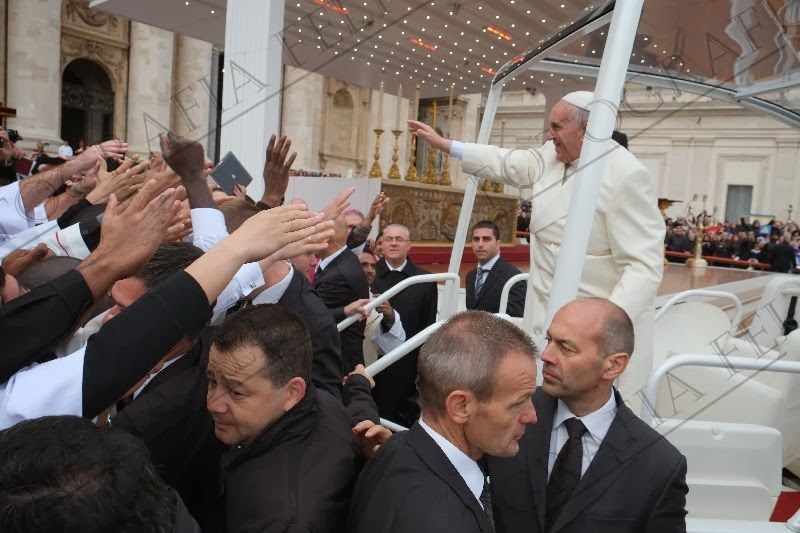 CDW Secretary Abp. Roche: Latin Mass (modern and Traditional) "will always be a part of the Roman Rite"

Archbishop Arthur Roche is the Secretary of the Congregation for Divine Worship, and is helping to organize a special conference commemorating the 50th anniversary of ... “Sacrosanctum Concilium.” ... Speaking of the Latin Mass, the archbishop highlighted that it “will always be a part of the Roman rite” because it maintains “the language in which the Roman rite is written - whether it be the ordinary or indeed the extraordinary form.”
“It is the way in which the Church expresses itself,” he explained, observing how there has been an increase in use of Gregorian chant during Mass, “especially at international events.”
Drawing attention to the special international reach of the city of Rome, Archbishop Roche went on to say that “people from throughout the world, from every continent and from the different hemispheres, come together to share Mass and are joined together in that common expression of the singing of the Latin part of the Mass.”
Turning his attention to Pope Francis take on the rite, the archbishop explained that “the Pope hasn’t expressed anything about the extraordinary form nor in fact about the ordinary form either.”

Well, that last statement can be nuanced. For instance, just for one public example, in his interview toCiviltà Cattolica, Francis said the following:

[A.] “Vatican II was a re-reading of the Gospel in light of contemporary culture,” says the pope. “Vatican II produced a renewal movement that simply comes from the same Gospel. Its fruits are enormous. Just recall the liturgy. The work of liturgical reform has been a service to the people as a re-reading of the Gospel from a concrete historical situation. Yes, there are hermeneutics of continuity and discontinuity, but one thing is clear: the dynamic of reading the Gospel, actualizing its message for today—which was typical of Vatican II—is absolutely irreversible. Then there are particular issues, like the liturgy according to the Vetus Ordo. I think the decision of Pope Benedict [his decision of July 7, 2007, to allow a wider use of the Tridentine Mass] was prudent and motivated by the desire to help people who have this sensitivity. What is worrying, though, is the risk of the ideologization of the Vetus Ordo, its exploitation.”

The spin you try and do for Francis is unbelievable. You do realize you loose credibility more and more as you try and rationalize that man's statements and actions. The OF cannot last because it does not inspire and promote Faith, it has done the opposite.

True Catholics do not disrespect the office of the papacy nor do they fail to understand that being intentionally uncharitable to anyone and encouraging others to be uncharitable is a mortal sin needing sacramental confession following repentance and true sorrow and a firm intention to resolve not to sin again and fulfilling the penance.

The OF Mass celebrated by the book isn't the problem, not doing what is required is and this could happen to the EF Mass as well if it were the norm today.

Does Anonymous realize that this post is a reproduction from Catholic News Agency?

To suggest that you lack credibility is grossly unfair because I believe that reading your perspective and insights is very helpful. You offer hope and calming to me when Francis says something that causes worry. As he just did with his “fashion statements”. I agree that most of the information in this post sounds favorable. But, with Francis there always seems to be a caveat, as he did in this comment. His warnings are always targeted at the more traditional wing of the Church. The black cassock guys are always the culprits in his stories. He could have very well concluded his comments here by stating that he sees problems with the post VII reform opportunists who cause and did cause a loss of Catholic identity. That seems to be the much bigger problem to focus on because 100% of the practicing faithful are affected by those developments. But his natural inclination seems to be to have suspicion about old fashion radicals. In regards to your work, I thank God for your vocation and would consider myself highly fortunate to be a part of your parish. BTW – could you please tell me if you have any relation to Larry McDonald? There seems to be a family resemblance. He comments on CNBC frequently and it seems like you could be brothers? He’s a very likable guy too.

I read your blog, and the traditional blogs for a "complete" perspective on Pope Francis. It's necessary to have at least one alternative view to the Pope Francis is gunning down traditionalists arguments (which, although I tend to believe that statement has truth to it, I don't go as far as some of the other traditional blogs go)...

The OF by the ultra strict book, (true propers being sung, Ad Orientem, etc) is definitely NOT the problem. (Although I myself am an EF, Eastern Rites devotee)...the problem really lies in a liturgical formation which at best can be described as faulty (I'm trying not to use the word abysmal..or atrocious)...There is a de facto change in faith, just because of how we pray, tends towards how we believe, and since the public expression of the Faith has changed, it's happened for sure.

I believe our good intentioned priest here, by rationalizing some of the words of the Holy Father, he's doing his "job" to make sure that we the Faithful, don't stress out so much over his words (even though it has to be tough doing this week after week doesn't it?...It'd be nice if we could just take the Holy Father as is (as I tend to do at my own blog)...and not stress over every statement (unfortunately concupiscence plays a role)

Totally unfair to say a priest loses credibility over trying to make sense of the Pope's comments.

As for O.F. "liturgical formation", I suggest that the E.F. Mass can be very helpful in this regard, even if a priest only celebrates a Low Mass one weekday a week.

I read southern orders in order to get a "fair and balanced" view of things Catholic. I think of it as the Fox News of religious blogs.

Someone has a bone to pick, I think.

Fr JBS, I agree, even if once a week, that can have an effect...or even if the priest is bi-ritual, that also can have a positive Liturgical Formation.

Joe, it's not always clear which is the cart and which the horse, but ALL of the half dozen priests in proximity to me, whom I know do celebrate the OF say-(only)-the-black-do-the-red properly, are ones who can celebrate the EF also.