The Bishop of Rome on His Holiness throne at the Cathedral Church of Rome, The Patriarchal Basilica of Saint John Lateran 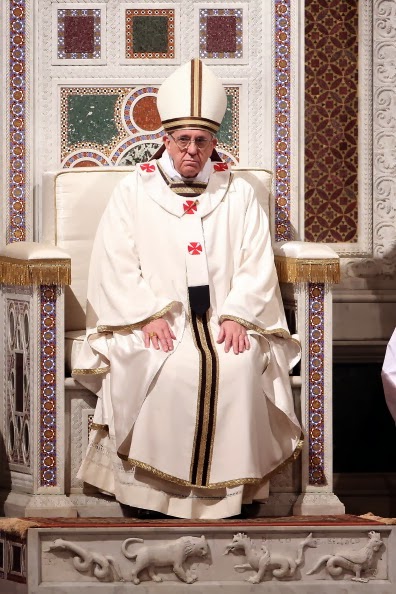 I just watched Pope Francis give his Sunday Angelus to a piazza jam packed with Romans and other pilgrims. All of Pope Francis' audiences are packed and even bad weather doesn't keep the Italians away.

Prior to Pope John Paul II who traveled the globe as the "Supreme Pastor" of the Catholic Church and to a lesser extent, Pope Paul VI who began to leave the confines of his Diocese of Rome, and even though Pope Benedict valiantly went around the world, popes generally stay in their home Diocese, that of Rome to build up the Church of Rome, the Diocese of Rome, the primary see of the Roman Catholic Church.

Secularism in Europe and thus in Italy and in Rome itself has diminished the role of the Diocese of Rome as the Faithful became tepid and no longer practiced their Catholic Faith and the heritage handed on to them by Saints Peter and Paul! They seldom went to Mass.

Pope Francis, by recovering and making central his role as the Bishop of Rome, the Primal See of the Roman Catholic Church, is bringing us back to 1950's Catholicism in Rome where the Bishop of Rome stayed home and ministered to the Romans and other pilgrims that came to see him.

Perhaps it is time for the Bishop of Rome to be the Bishop of Rome and thus create a Diocese of Rome that is exemplar for the entire Church, meaning that the majority of Catholics in this Diocese are practicing Catholics and attending Mass each Sunday and bringing their faith to bear in the public square.

Popes are the Bishop of Rome and they should stay at home to take care of their diocesan family. We all know church workers who throw themselves into their churchy work and let their families fall apart. Popes can do that too when they travel the world and forget their diocese isn't the world, it is the Diocese of Rome. Take care of Rome and let the other bishops take care of their dioceses in union with the Bishop of Rome who sets the example of what it means to be a good Bishop!
Posted by Fr. Allan J. McDonald at Sunday, February 16, 2014

Could he look more miserable?

Some would call that looking pious. Compare this to how Benedict looked during the liturgy. The pope keeps his personality out the liturgy as he should.

Both Popes are deeply invested, when celebrating the Liturgy, and not distracted...as compared to some prelates here in the US that I argue could do a much better job of being intimate with the Liturgy

From the time of Pope Gregory the Great the pope has only one title - servus servorum Dei. Tomorrow King Philip of the Belgians will sign into law a decision of the Belgian parliament to allow the euthanasia of children. Belgium might not loom large on the American radar, but it is the seat of government for the European Union and the country for which the British Empire went to war one hundred years ago this year.

What do we hear from the Vatican? A deafening silence. The soon-to-be-cardinal Archbishop of Westminster made headlines this week, but for what? Criticizing the much-needed welfare reforms being implemented by the UK government (and for the sake of American readers, the existing system makes sitting on your arse a more lucrative option than getting a job).

The priest this morning (a former Anglican) who celebrated a Missa Cantata for Septuagesima, reminded us that fifty years ago Mass attendance in Flanders approached one hundred per cent; nowadays it is five per cent. But, of course, it has nothing to do with Vatican II or the liberal agenda pushed by Cardinals Suenens and Danneels - perish the thought!

It takes a special quality of Archbishop to destroy the faith of the most devoutly Catholic country in Europe; but it has also been achieved in Ireland. Meanwhile Rome burns while its bishop issues gnomic utterances which have to be interpreted or 'spun' by a parish priest in Macon, GA.

You couldn't make it up. I thought that after the 1970s things were improving, but we are now back to square one. "Quem deus vult perdere, dementat prius" wrote a pagan author, and while I can't believe God would desert His Church, she is desperately in need of leadership. Deus adiuva nos!

"His Church, she is desperately in need of leadership."

Well, John, at least you can be congratulated for managing with to use both the words "Church" and "leadership" in a single sensible sentence.

John - You have selective hearing.

PI, the fact that back in December a Monsignor Pegoraro, in an interview for a minority Catholic publication which in this country can only be accessed on-line, expressed himself as "very disappointed" is not exactly impressive. I think John Paul II would have said something.

John - You said, "What do we hear from the Vatican? A deafening silence."

Just because you didn't hear it doesn't mean it wasn't said. And, in fact, the Vatican DID respond to the Belgian situation. You were wrong.

Msgr Pegoraro, as the Chancellor of the Pontifical Academy for Life, was speaking in the name of the Church and the article was carried in the National Catholic Register. It was not hidden away in some obscure online website.

I suspect the interview was available to any news agency or publication. You can't justly blame the Vatican for what other organizations choose to run in their publications.