AT MASS, EITHER THE 1962 VERSION OR THE REVISED ORDINARY FORM MISSAL, DOES THE SACRIFICE OF THE MASS RESACRIFICE JESUS? 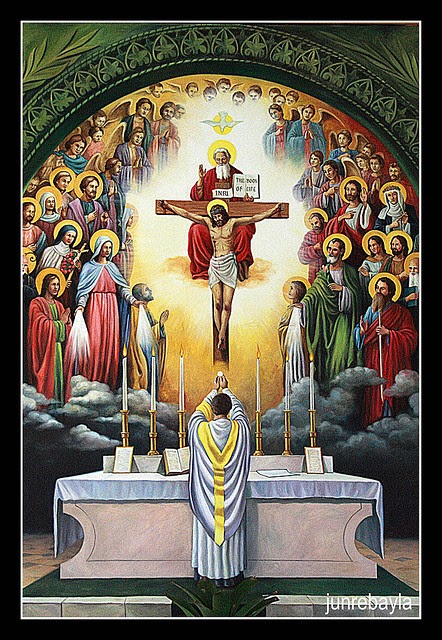 At another blog, there is a bizarre accusation made of the 1962 missal and the missals prior to it and here's the money quote:

The loss of the patristic heritage and its replacement with Scholastic theology in the thirteenth and subsequent centuries created an appalling mystique to the Mass where it was claimed that Christ died anew and again day after day upon the altars. You can read the rest of the drivel HERE.

Yet, as a child growing up in the Bible Belt, where Protestants taught that Catholics resacrificed Christ on our altars everyday, because the one Sacrifice of Calvary wasn't enough, we children and adults were given an "apologetic" to fight against this nonsense with our well-meaning but proselytizing Protestant friends.

It was the one Sacrifice of Calvary offered anew in an "eternal" way and unbloody, as Christ was not killed or sacrificed again! I heard many sermons on that in the deep south in my parishes!

This is what the Baltimore Catechism #2 taught us as well, and the Sisters of Mercy of this time as well as the Sisters of Corondelet who taught me would have taught this about the Sacrifice of the Mass:

The manner in which the sacrifice is offered is different. On the Cross Christ physically shed His blood and was physically slain, while in the Mass there is no physical  shedding of blood nor physical death, because Christ can die no more; on the cross Christ gained merit and satisfied for us, while in the Mass he applies to us the merits and satisfaction of his death on the cross.

My final comment: In this, there is absolutely no difference between the two forms of the one Latin Rite!
Posted by Fr. Allan J. McDonald at Saturday, February 15, 2014

Although the blog post you mention--by a history professor who says he teaches medieval spirituality!--seems pretty pig-headed about the history and understanding of the traditional Mass, he gives a petty good summary of the understanding of the Mass by contemporary traditionally believing Catholics, though certainly not by all ordinary parish Catholics:

"contemporary Catholic theology first and foremost locates the Eucharist as a participation in the one eternal sacrifice of Christ offered on the Cross at Calvary. It further ties the concept of the Eucharistic sacrifice into the meal sacrifice or communion sacrifice tradition of the Hebrew Scriptures where the participants received back from the Temple priests a portion of the sacrificial lamb on which to dine themselves as a mystical sharing of the meal with God to whom the lamb had been offered."

I am intrigued to know more about this guy. He doesn't identify himself but to read his blurb he is in demand internationally as a bien-pensant, a theologian and an academic historian, although his MA and PhD he says were awarded by an unnamed private institution, which raises some interesting questions. He claims to "embrace the future" which would seem to add clairvoyance to his list of self-proclaimed attributes - the hack journalist Lincoln Steffens said of the Soviet Union "I have seen the future and it works", a remark regarded as epitomizing vainglorious self-delusion. He sees the historian's task as leading the people towards the future, an ambition which few historians would aspire to.

There is more. Apparently he is a polyglot and an accomplished Latinist who used to MC the Mass before the Council and knows the Tridentine Liturgy inside-out, but seems to have had a Damascene conversion in 1965 and since then the history of the Church has been a conspiracy by dark reactionary forces to thwart the Council's vision and prevent us reaching the promised land.

He is certainly well-read, but gives the impression that he plunders history in order to make a polemical point (yes, we're all guilty of this from time to time) and has a habit of presenting well-known facts as if he has discovered something the rest of us never knew about.

I have been reading some of his posts from 2008 when his blog was called Consolamini. Having spent Holy Week in a Cistercian monastery, where of course he was immediately co-opted to teach Latin to the monks, he writes:

"The Triduum is spectacular in Latin but its depths would be lost on even the person with three years of High School or University Latin under their (sic) belt. And to see a parish try to "ape" this monastic liturgy would be a true 'monkey show'".

He gives Benedict XVI credit for his intellectual ability as a theologian but sneers at his middle-class Bavarian origins and lack of "cultural sophistication" as evidenced by his taste in furniture.

Which all goes to show he is conceited and condescending in equal measure.

"where Protestants taught that Catholics resacrificed Christ on our altars everyday, because the one Sacrifice of Calvary wasn't enough"

In the modern age we live in, there is this electronic device called a television through which
we can watch something which was performed and recorded decades ago. And we can re-watch and
re-watch this same performance or program. It was not all that long ago in the history of man that
something like this would have been considered a miracle beyond comprehension. If man can perform such miracles, then certainly we should believe in the power of God to do greater.

As you quote from the Baltimore Catechism:

Christ's suffering and death, His Eternal Sacrifice is re-presented to us in each Mass in an unbloody manner. It is not some event in the past, stuck as it were in the Temporal order of things, but it
is part of the Eternal order and so it is continually available to us down through the ages. It is
part of the Divine order and so time cannot exercise exclusive dominion over it.
The effects of the redemptive suffering and death of Jesus are not bound by our Temporal existence.
Whatever merits He earned by all His sufferings, Passion and death are part of the Eternal order and not limited by time and space. In the Holy sacrifice of the Mass, His Passion and death, not bound by space and time, are made present to us in the here and now. The Divine Treasury was filled by Christ's Redemptive suffering and death and the merits thereof are continually available to us.
Our consumption of His
Body and Blood at the Holy Sacrifice of the Mass is the God-given means for us to become incorporated into His Mystical Body and to share in the Divine life.