Same Ordinary Form Mass, two valid ways of the "art of celebrating" this form as the Church allows: 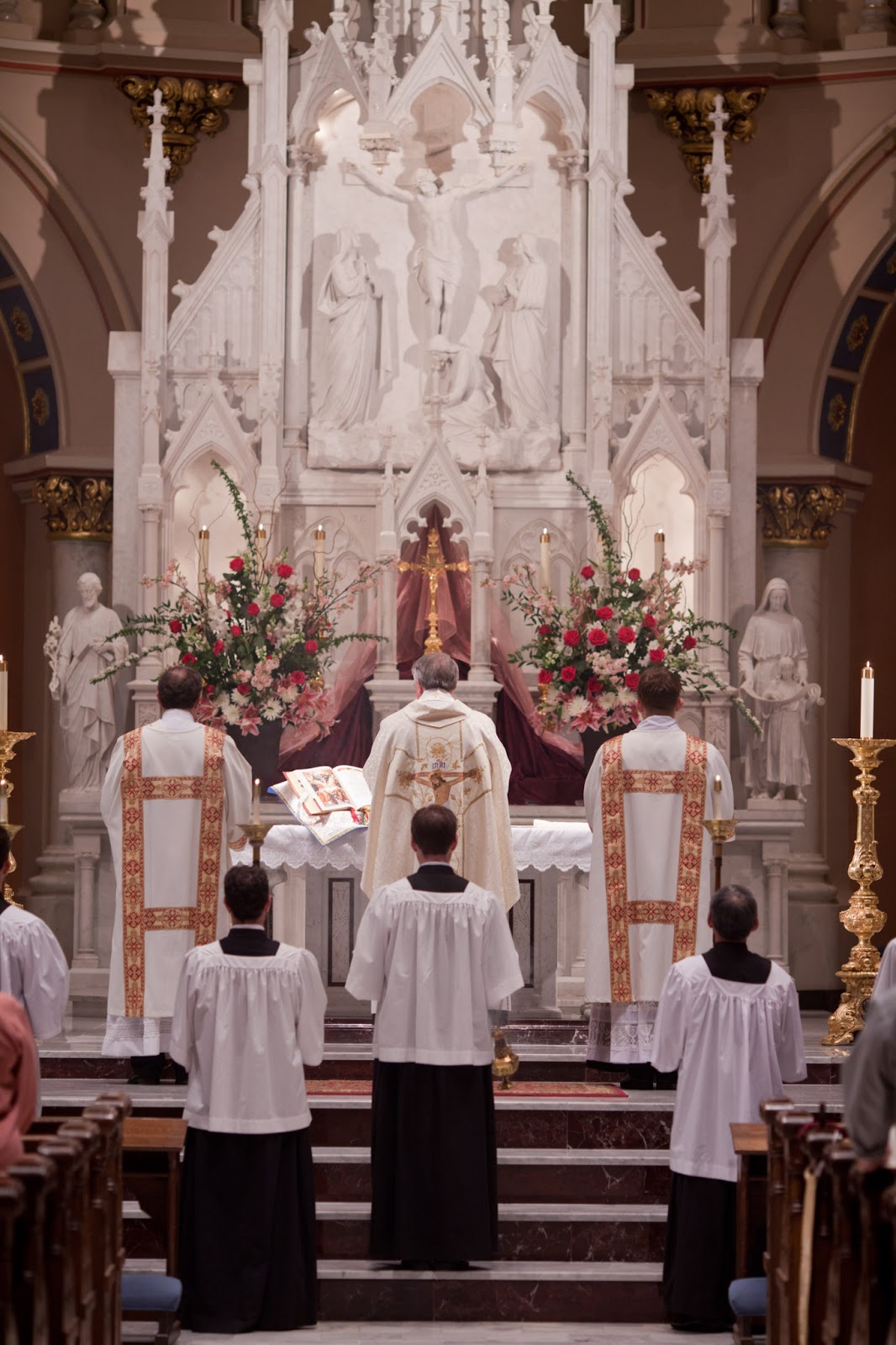 I have always cautioned against making the Liturgy, any liturgy, OF, EF, Anglican Ordinariate, Eastern Rite into an idol and turning into an ideology any aspect of the various Masses to the neglect of what these Masses actually are.

God at all the valid Masses, even those that might be illicit, but valid, gathers the baptized people of God including their indispensable ordained priest from their midst and joins them to the Head of His Church, Jesus Christ, Bridegroom and High Priest and makes visible on the parochial level the Church, the Body of Christ with Christ Her Head.

In that context and in the context of prayer and thanksgiving, God makes His Word known to us in the Liturgy of the Word. Following that, God makes present in the ordinary bread and wine the priest offers on his behalf and on behalf all the baptized, the Real Presence of His Glorified crucified and risen Son which occurs after the Epiclesis and consecration of the offerings. Then the offerings become the Offering, Jesus Christ as in an unbloody way Christ Himself offers Himself to the Father as a Sacrifice for our Sins. The One Sacrifice of Calvary is re-presented to us and to the Father as the only means of our salvation. The Father accepts, of course, this one Sacrifice of His beloved Son and in the resurrection return Him to us for our salvation on the third day and in every Mass and ultimately at the Second Coming which the Holy Sacrifice anticipates.

We are then sent to live our faith as is our calling at home, work, recreation and in the public square.

The Church gives us the liturgy and we have several forms all of which have laws that govern its proper celebration.

Each Catholic parish and community throughout the world must be faithful to what the Church requires and strive to make the Liturgy as beautiful as possible within the context of the General Instruction of each Missal and its rubrics.

But also the "art of celebrating" the Mass applies specifically to the priest who has the responsibility of assuring that each Mass is beautifully celebrated and that the congregation understands its part in the "art of participating" in the Sacred Mysteries in an actual way.

The renewal of the current Ordinary Form of the Mass has more to do with what is in our power and control. This involves the quality of Sacred Chant, Chanting the Mass and its propers and making sure any "filler" Sacred Music is in continuity with the reverence, piety, devotion and spirituality of the Mass handed on to us, especially in the Latin Rite, from the time before the Second Vatican Council.

We can control the choreography of the Mass, the beauty and cleanliness of vestments and others vesture and call everyone to a truly traditional Catholic piety and reverence during the Mass.

Ultimately, however, the pastor and priests of a parish must be pastoral and not yank the laity around with their own ideosyncrasies. Progressives continually do that and now so too are traditionalists.

The only way to prevent the cult of the personality and the absurdity of treating the Mass as one's own toy in a childish way is the "say the black and do the red." It also means making room for options that allowed in any form of the Mass. This includes kneeling or standing for Holy Communion, Holy Communion either on the hand or in the mouth, under one form or both,  the Mass celebrated facing the congregation or facing the liturgical east and allowing the laity, men and women, boys and girls to participate in the roles of altar server and reader as well as Extraordinary Minister of Holy Communion.

Only when an option is banned by the bishop or changed by Rome should we thus eliminate that option or change what the parish's practice is.

Fr, options is the problem to begin with. Nobody, or very few, are going to say the black and do the red. There is no fix for the OF, and there is no fix for the slow but certain drift of the Church toward culture and humanistic orientations. Well, there are some fixes but they would be considered extreme and impolitic…which is to say, there are no fixes.

We are going to have to accept the fact that the Church is morphing slowly into a different Church. This is God's will for now, but whether it becomes a harsh judgement or a mere wake up call that leads us back to Him remains to be seen.

I wish you and some others would stop playing this game of OF and Pope "Twister" in an attempt to justify liturgical and theological enormities. The Church is in crisis and the faith of millions is threatened.

It's beginning to seem obvious that the reform of the reform is a dead letter at least for the balance of the current papacy--in terms of making lists of desirable features of a revision of the OF missal, which now seems unlikely to be in the prospect for the foreseeable future. But a sensible brief statement from Patrick Archbold:

"However, I have thought for some time that much greater emphasis should be placed on an Excellence in Liturgy Movement. I think this could be a much broader based movement than the 'reform of the reform.'

"This movement should focus on the broad elimination of liturgical abuses and the promotion of those elements specifically referenced in Sacrosanctum Concilium.

"Let us broadly perform the Novus Ordo mass as best as it can be performed. Let it be standard and reliable across the board. When we have a achieved that, we are in a much better place to discuss what the future of reform looks like."

But my own opinion is that the single most immediately fruitful step would be ad orientem worship generally.

I wonder whether your experience there, Fr. McDonald, indicates that what happened when a small town Wisconsin parish "turned towards the Lord" a year ago, would likely happen in a typical parish elsewhere:

There is a fascinating post by Fr. Christopher Smith over at Chant Cafe blog with some intelligent, mostly unemotional discussion to follow re: Is the ROTR dead? Fr. Smith is an an awe-some (hate that word, but nothing else really describes him) priest over here in SC whom I first met several years ago. He has accomplished some amazing things in this non-Catholic state!!

The only question is when that happened.

Having studied the history and the Fathers, my current guess is that the Roman Church defected in the 9th Century with the rise of the papacy and the advent of Frankish influence on Church governance, doctrine and liturgy.

Of course, Pastor Gene, with his superior understanding of all things theological and Catholic will, alone, be able to withstand the slow morph of the Church. Then he will form his band of three like minded converts and they will reestablish the True Church in a garage in East Macon...

When plebes like Anonymous encounter someone with an actual history of theological and Biblical study, they almost always become hysterical because they feel threatened. They haven't the resources with which to engage in real dialogue, so they try the smart-ass approach. Nobody cares.

And, of course, Pastor Gene is the only one here with an actual history of theological and Biblical study. So, conveniently, anyone who does not see things as he does is hysterical.

I wonder if our rude Anonymous knows enough Latin to understand the meaning of "ad hominem"?

If one has nothing substantive to offer, why comment? "Whereof one cannot speak, thereof one must be silent."

Anonymous, why don't you document your graduate degrees and seminary degrees for us, then?

Anonymous, Trent should not be included. it's purpose was to counter the "morphing" of Luther and his followers. I would say that it's not the Church that morphs, but rather those members of her who morph into schism and heresy.

George, I wouldn't agree with your assessment based on a rather intense and multi-faceted study of these things. For example, I am of the opinion that when an Ecumenical Council promulgates a Creed that is ratified by subsequent councils with an admonition that the Creed is not be changed, the one who then changes the Creed is more likely to be the one morphing than the one who refuses to change the Creed. Anyway, as to Trent specifically, my list was merely presenting periods in which various groups argue the Roman Church morphed (by which I mean changed substantially). Trent was the pinnacle of scholastic theology, which itself was a huge change in the Church. Hence the augment w of morphing at Trent.

That is an admittedly simple example of a larger issue that should be considered. And frankly, it is an issue that is too big for this blog and its comment section.

At any rate, my only point is that the Roman Church has morphed over time. The question is whether that morphing matters, that is whether it involves heresy.

Based on your comment, my guess is that you and I would disagree about the answer to that question.

I would argue that Vat II was a qualitatively different and more extreme morph than the others you mention. It fundamentally changed Catholic identity and the implications of the OF are that it is a move toward protestantism.

Anonymous 3:31 - And what was so "substantive" about Pastor Gene's 2:12 comment. You know,the one where he used the ad hominem, snarky comments about "plebes" and "hysterical" comments, hmmm?

Pastor Gene - My degrees, undergraduate and graduate, are from Catholic colleges and universities. Are yours?

Anonymous, what problem do you have with the rise of the papacy(as in your quote below)?

"Having studied the history and the Fathers, my current guess is that the Roman Church defected in the 9th Century with the rise of the papacy and the advent of Frankish influence on Church governance, doctrine and liturgy."

We Catholics recognize the pope as the successor to St. Peter.

Interesting that you chose the 9th century as that being when the "Roman Church defected". Are you perhaps Eastern Orthodox?

So, Anonymous, just what degrees do you have (don't lie)? Mine are listed in my personal info. Click on it.