BEING HALF ITALIAN, YOU KNOW I MUST REALLY LOVE BYZANTINE CONSPIRACY THEORIES ALTHOUGH I WOULD NEVER, EVER PROMOTE THEM BUT...

...Today, as reported by Religious News Service (RSN),  the Vatican’s media guide for Saturday’s service – officially called a consistory – reproduced the oath of fidelity that the new cardinals make to the pope, but had them swearing obedience to Benedict rather than Francis.

The mistake was not repeated in the official oaths, although each of the new cardinals immediately went to greet Benedict right after receiving the distinctive red hat, or biretta, from Francis.

It reminded me to go back and reread  an article, from the Remnant Newspaper, which was posted on Pewsitter earlier in the week, which I think has since been removed that fascinated me as an Italian imbued by birth with suspicion of things. You can read it HERE and it is oh so Italian, deliciously so! 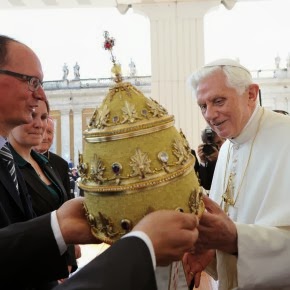 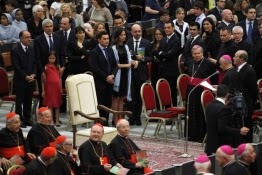 Here is a small silly excerpt:


The problem of the canonical validity of his resignation is enormous. In fact, invalidity —according to some canonists—does not regard only the case of coercion, but arises in other cases as well.
SIGNIFICANT SIGNS
For example, one may ask whether there was a contest of the will in his heart when the Pontiff made the decision—that is, he if retired interiorly as well as exteriorly. It seems a speculative question, but in the things of God's the heart, which He alone sees, is determinative.
In fact, even for the sacraments this is requisite. The consecration of the Eucharist requires matter, form and intention: if it lacks even one of these elements, the sacrament is invalid.
For example, if there is no inner intention of the priest to consecrate, if he expresses the words, but has no intention of consecrating, the consecration is invalid.
Has Benedict XVI also retired interiorly?
In addition to the language of words there is that of actions. What we see is that he has chosen to remain “in the enclosure of Peter,” to dress in white, to be called “Pope emeritus” and to continue to be called Benedict XVI (signing thus).
He also refused to change his coat of arms back to that of cardinal, still retaining one with the keys of Peter. The Vatican has said that Benedict “prefers not to adopt a heraldic emblem expressive of the new situation created by his renunciation of the Petrine Ministry.”


We know that in the Church there is also a “tacit magisterium.” Perhaps this is the case. And of course Benedict is in agreement with Francis. A beautiful mystery.

...The only official explanation lies in his speech of February 27, 2013, the one in which he clarified the limits of his decision: “Here, allow me to go back once again to 19 April 2005. The real gravity of the decision was also due to the fact that from that moment on I was engaged always and forever by the Lord.”

BUT THEN THERE IS THIS BOMBSHELL FROM TODAY'S CONSISTORY THAT WILL ADD FUEL TO THE FIRE OF ITALIANS WHO LOVE THIS SORT OF THING AS MAKE CLEAR ABOVE:

This is from Religious News Service (RNS) and written today and will no doubt be the gasoline needed to fuel the flames that Pope Benedict is still the pope of some kind:

...Adding to the drama of the day, Benedict was an unexpected participant at the ceremony, his first public appearance at a Vatican rite since he resigned the papacy on Feb. 28 last year following years of scandal and dysfunction in the Roman Curia.

It was the first papal retirement in six centuries and paved the way for the election of Francis two weeks later.

Benedict, who lives in a monastery on the Vatican grounds, had pledged to remain “hidden from the world” to avoid making himself a distraction.

But Francis has periodically visited the emeritus pope, and the two have been photographed together, including unveiling a statue last summer in the Vatican gardens. Benedict had never taken part in a public liturgy, however...

In an amusing sign of the potential awkwardness of such a transition, the Vatican’s media guide for Saturday’s service – officially called a consistory – reproduced the oath of fidelity that the new cardinals make to the pope, but had them swearing obedience to Benedict rather than Francis.
The mistake was not repeated in the official oaths, although each of the new cardinals immediately went to greet Benedict right after receiving the distinctive red hat, or biretta, from Francis.

There's hope for you yet, Father!

It's ironic. When the popes stopped wearing the papal tiara (because a modernist told them the poor were offended) they begin to wear all kinds of funny hats. You can bet that if you got close to a post Vatican II pope and had a funny hat, that pope would wear it. Pope Paul did it. JP II did it. Benedict did it. Now Francis does it. But look what happens when Benedict is presented with a tiara, he won't even touch it. He was very gracious but look at the series of photos from the presentation. He never physically touches it. But give the pope a clown nose and the dismantling of the papacy continues.

The Remnant is the propaganda organ of the Illuminati.

Or is it the Tri-Lateral Commission?

Or, maybe it is the Vril Society, or the Phoebus Cartel, or the Bilderberg Group, or the Skyddspolisen.....

It would be hard to find a funnier funny hat than the gold number in pic #1.

I suggest you google the pictures of Pope Francis wearing the feathered African hat presented to him in the Vatican. Hedda Hopper at the peak of her career never wore a hat with that many plumes. But boy oh boy liberals hate things like the tiara. Can you be honest and state the reason. I'm interested? And don't say it's not in the Gospel or that it's offensive to the poor. The poor don't care. Homosexual activity is explicitly condemned in both the Old and New Testaments but that has become the modernists new sacrament. A modernist hating traditional vesture is very much like the liberal nuns who threw away the habit. They would never put on a veil. But if they could be ordained priests they would sleep in a Roman Collar.

Pope Francis was joking in his funny hat. The men who wore that big gold number were deadly serious...dressed like royalty from a few hundred or a thousand years ago...and insisting upon being treated as such. Do you think that Jesus had a sense of humor? I do. I don't "hate things like the tiara". I do, however agree with Pope Francis that dumping the cartoonish, silly costumes is a wonderful idea. And btw, what does the gold hat have to do with homosexual activity?

Is Anonymous arguing with himself? Split personality? Bi polar?

The tiara is cool, but every time I see it I think about the Stanley Cup.

"The men who wore that big gold number were deadly serious...dressed like royalty from a few hundred or a thousand years ago...and insisting upon being treated as such."

Men like Pope St. Gregory the Great who saved Europe.
Men like Pope St. Pius X who promoted daily reception of Holy Communion and Gregorian Chant.
Men like Pope Benedict XV who did everything possible to promote peace during the horrors of World War I.
Men like Pope Leo XIII who wrote the greatest document on the social teaching of the Church in history.
Men like Blessed Pope John XIII who wrote Pacem In Terris, restored Latin in the seminaries and called the Second Vatican Council.
Men like Pope Pius XII, who saved numerous Jews from the hands of Nazis during WW II and continued to feed hundreds of thousands displaced by the war well into the 1950s.

Men like these occupied the throne of Peter, wore the tiara in humility. They never acted like a king but as humble servants of the servants of God. The tiara is a symbol of the popes three fold authority, not of royalty. When it and all other expressions of the Faith of the Church were consigned to the junk heap what replaced it. We have a church full of apostates, chaos reigns, churches are empty, entire nations have lost the Faith and for what. What have we gained by throwing away our past? Nothing but we have lost much.