WHAT IF...AND WHO WOULD NOTICE?

Yes Virginia, this is an Ordinary Form Mass at St. Joseph Church, Macon: 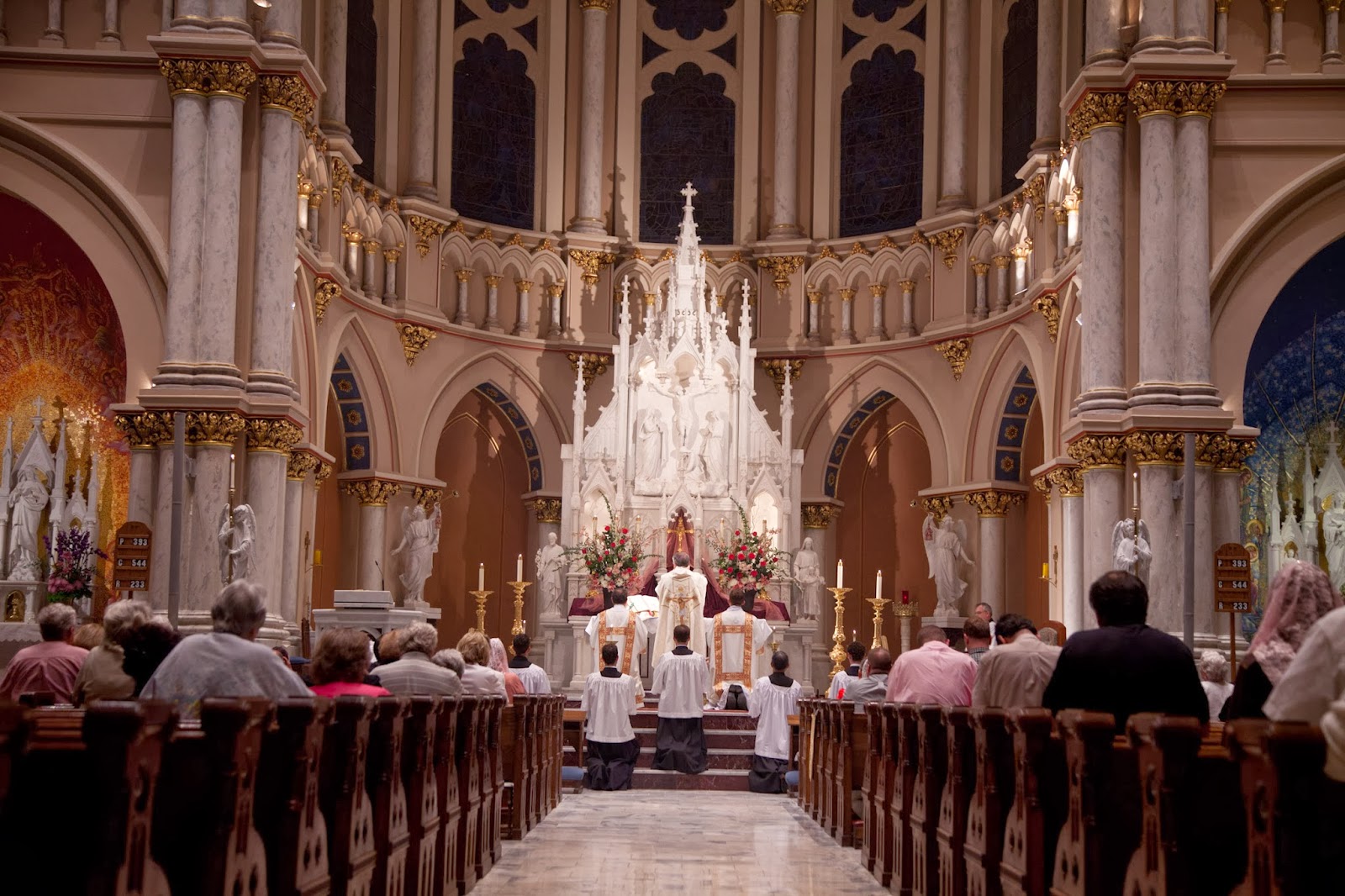 As everyone knows, I have stated that the only way forward liturgically is in three ways:

1. Celebrate the Ordinary Form as it currently is and as it can and should be celebrated and similar to how Pope Francis does and Pope Benedict did  at all the Vatican Masses even if vernacular predominates

2. Hope and pray that Pope Francis, who seems to have already moved in this direction with his approval of a traditional appendix for the Anglican Ordinariate Missal and his locution to the head of the Congregation for Divine Worship, that the traditional elements of the Extraordinary Form Missal may be added to the regular Latin Rite Ordinary Form Missal

3. Allow for the liberal celebration of the 1962 Missal as it is currently under Summorum Pontificum

In other words moving forward means enhancing the Ordinary Form's Mass, even if no major changes are made to it, by making it feel, sound and act more like the 1962 Missal by a recovery of the 1962 Missal's spirituality, reverence, piety and devotion all the while promoting actual participation, firstly by getting Catholics to Mass and secondly through intelligent internal and external participation.

At St. Joseph Church, we began celebrating our 12:10 PM Mass ad orientem for the Liturgy of the Eucharist for nearly two years now. The Introductory and Concluding Rites remain at the chair which is angled toward the altar and of course the Liturgy of the Word is as it is in the Ordinary Form at all our other Masses.

Although I was a flaming liberal in the 1980's (not completely but kind of), today I would never do that which is not permitted for Mass by liturgical law. I would respect my bishop in this regard, but what if and who would notice if we did the following at our 12:10 PM Mass?

2. Then while the Entrance Chant continues to be sung, the priest approached the altar quietly saying the devotional prayers of the EF Mass to do this, incenses it, quietly reciting the psalm that accompanies the incensation. And afterward goes to his chair.

3. After the Entrance Chant and at his chair, the priest begins with the Sign of the Cross, Greeting, Penitential Act, Kyrie, Gloria and Collect.

4. The Liturgy of the Word takes place as usual for the Ordinary Form

5. At the chair after the homily the priest leads the saying or chanting of the Credo and the Universal Prayer after which the altar is prepared and the offering presented to the priest from the laity.

6. The Offertory Prayers of the EF Mass are use, prayed quietly and in Latin (this in fact would be valid but illicit, but what if the priest did this and who would notice?)

7. The priest turns to the congregation and says the complete "Pray Brethren.." and the congregation responds as the priest remains facing them. The priest continues the Mass with the Prayer Over the Offerings, Preface Dialogue, Preface, Canon, Pater Noster, etc only to turn toward the Congregation for the "Peace of the Lord be with you all" and the "Exchange of the Kiss of Peace." He turns back to the altar for the Fraction Rite and private prayers for His Holy Communion while the Agnus Dei is sung and after its singing, genuflects and turn to the congregation for the Ecce Agnus Dei and response, turns back to the altar for his Holy Communion.

9. After Holy Communion the priest goes to his chair, observes silence, prays the Post Communion Prayer, makes announcements and then approaches the altar ad orientem to pray quietly the "Placeat Tibi, Sancta Trinitas, then he kisses the altar and turns to the congregation

10. Then the priest says or chants "The Lord be with you" and offers the blessing in simple or solemn form and then the deacon dismisses the congregation

11. Then all listen to the chanted or spoken "Last Gospel" and the recession takes place

At all the Vatican Masses as soon as the deacon dismisses the congregation, things are not quite over, because a Marian Chant according to season is always chanted with Pope Francis facing the Image of Our Lady toward the Gospel side of the Altar.  What is the difference in that and reciting or chanting the Last Gospel? And then a Marian Hymn could accompany the recessional.

What are your thoughts?
Posted by Fr. Allan J. McDonald at Friday, February 28, 2014

Well, I certainly appreciate such liturgical elements as the Prayers at the Foot of the Altar, the Tridentine Offertory prayers, and the Last Gospel, and I'm very happy to offer these during the E.F. Mass. However, I'm afraid I just don't see the need to introduce these into the O.F. rite of Mass. Since a priest already benefits from these elements when he celebrates Mass according to the E.F., and since these elements are of no direct benefit to the congregation, why insert them into every single Mass? Just say or sing an E.F. Mass daily or weekly, and let the O.F. Mass be the simplified rite that it's meant to be.

Now, introducing the ad orientem posture for the Eucharistic Prayer, providing an Altar rail to promote Holy Communion kneeling, etc., would benefit the congregation by drawing from the depths of the Roman liturgical tradition. I'm all for that. I'm not opposed to the other things, but I just don't see the point.

Believe me when I tell you I'm no expert, Father, but if I'm not mistaken you could at least get away with the Prayers at the Foot of the Altar and the Last Gospel. I believe it was Fr. Z who pointed out, in relation to this very question, that they aren't a part of the Mass properly speaking, and so their inclusion would not be illicit. The other stuff....well, again, I'm no expert, but in my limited knowledge of things it does seem like that would be adding to the missal, whether or not such an addition would be objectively commendable or not...

My views, for what they are worth. Firstly the GIRM specifies some rubrics for the Novus Ordo, but assumes that most of the gestures and movements will be those traditional to the Roman Rite (e.g. which knee to genuflect with, how to use the thurible, a lot of the bows, how wide to extend the hands, how to elevate Host and Chalice, use of chalice veil and pall, how to join hands). This is the point made by GIRM 42. It is not an entirely satisfactory state of affairs, since the absence of detailed rubrics encourages personal mannerisms - I have seen the paten elevated with the Host, or no elevations at all, since if Mass is versus populum they are not strictly necessary; incensation one-handed in the Eatern manner; exaggerated gestures and so on. Celebrate the OF in a similar way to the EF, and you can't go wrong. The Australian bishop Peter Elliot has produced a guide to the ceremonies of the Novus Ordo, like Fortescue did for the Old Rite.

Taking your points in order:
1. By all means say the psalm Judica Me with its antiphon Introibo on the way from the sacristy to the altar but NOT the Tridentine PATFOTA with its Confiteor, since the Introductory Rite and Penitential Act replaces these.
2. The incensation prayers and psalm Dirigatur belong to the Offertory. In the NO the priest puts incense into the thurible before the Entrance Procession, so if you want to say the blessing prayer Ab illo benedicaris, then why not? Also by all means use the traditional prayers when approaching and venerating the altar.
3. As you say, it's better if the sedilia are on the epistle side facing liturgical north. You can always turn to the people for the Dominus vobiscum.
4. Use the Lectionary lessons, but sing the Gradual and Alleluia/Tract from the Graduale Romanum. If the Responsorial Psalm is used, only repeat the response if it is sung (as it is meant to be).
5. If there is a deacon, he should pray the intercessions in the Prayer of the Faithful. The multi-reader polyglot intercessions are sadly a feature of papal Masses in St Peter's and should be left there. When this Prayer was introduced in 1965 the Canon, which prays for the Pope and bishop(s), was still said secreto. Now it is said aloud, do we still need these particular intercessions? I find the whole Prayer an unwelcome interruption to the liturgy at this point, particularly at a Latin Mass, and if it were dropped few would complain. Having just sung 'et vitam venturi saeculi' its a bit bathetic to have to meditate on last night's TV news.
6. I think you have to use the OF prayers for the offering, but I would add the Suscipe between the Lava me and Orate Fratres. Use the incensation prayers - Benedict XVI did.
7. Recite the Canon in a low but audible voice. Think of singing the central part. Use EP1 (Roman Canon) as the norm for Sundays. Leave out the Offerte vobis pacem. It's optional anyway, the way it's done is not liturgically correct, and quite frankly it's an embarrassing mess. People will thank you for it.
8. AAARGH! The best thing to do with Extraordinary Monsters is to sprinkle them with Holy Water. With any luck they'll flee the church screaming or burst into flames on the spot. Garlic also helps.
9. Use the legitimate option of remaining at the altar for the Postcommunion and concluding Rites. If the Ablutions are done properly there is no need for a period of enforced silence.
10. The present concluding Rites were introduced in 1967 and the priest was encouraged to recite the Placeat to himself as he leaves the altar. How many actually do this?
11. No Last Gospel. It's a late addition anyway, and to include it would indicate that you were tampering with the rite. Sing the Marian antiphon, its versicle, response and oration facing the altar. No recessional hymn or organ during penitential seasons - process out in silence.

"6. The Offertory Prayers of the EF Mass are use, prayed quietly and in Latin (this in fact would be valid but illicit, but what if the priest did this and who would notice?)"

I wonder what in this would be illicit. Can not anyone, lay or cleric, pray privately and silently, whenever and wherever he wishes, during Mass or outside of Mass, in whatever language he wishes?

I recall that some of Padre Pio's Masses were said to last several hours, because of his extensive pauses for private silent prayer.

Henry, the same was said for St Philip Neri. It is said that the server could leave the altar for hours at a time, and still be back in time to resume his duties. Thirty years ago I dropped in at St Etheldreda's in the City of London and a foreign priest was at the altar celebrating a Low Mass in a similar manner, without server or congregation. He might, like St Philip and St Pio, have been a saint in the making, but it's more likely he was as mad as a hatter.