IS THERE CONTINUITY OR RUPTURE BETWEEN THE MAGISTERIUM AND THE DEPOSIT OF FAITH IN TERMS OF THE PRE-VATICAN II AND POST VATICAN II TEACHINGS ON THE ORDAINED PRIESTHOOD AND THE HOLY MASS?

The priest, the Mass, the Church, one and the same since Christ founded His Church and showed forth His High Priesthood and instituted both the ordained priesthood and the Mass as well as the other sacraments: 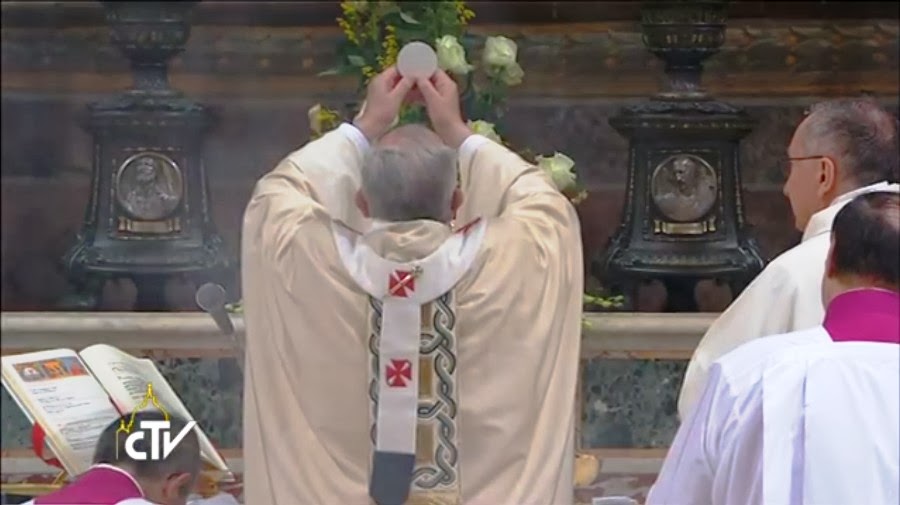 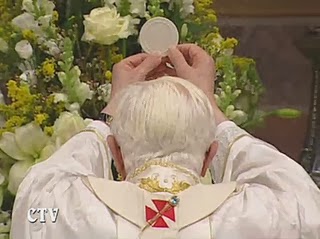 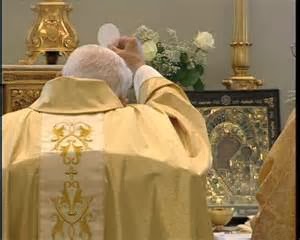 Are progressive, heterodox Catholics, either heterodox by choice or by ignorance, using the Ordinary Form of the Mass to denigrate not only the other legitimate form of the Mass, the 1962 Missal, but also the orthodoxy of the role of Holy Orders, that of the ordained priest, as linked to the Old Testament Aaronic priesthood which is a prefigurement of the New Testament Catholic priesthood?

Take a look at what one commenter had the temerity to write in the most condescending way at another blog about this:

"Just look at the whole structure of the (1962 Missal) celebration, including the priest using a language almost no one else knows, and with his back to the people (or ad orientem or whatever your term), and the people having little or no vocal role in the rite. Would anyone among the laity every come up with the idea that the priest is the one offering the sacrifice, and he’s doing it for the people and on behalf of the people?"

Is there not a continuity between the pre-Vatican II priesthood and the post-Vatican II priesthood, just as there is a continuity between the pre-Vatican II Mass and the post-Vatican II Mass? Yes, of course there is continuity, except in the minds of the heterodox "spirit of Vatican II Catholics" of my 1970's generation who are shooting into their veins  their last drops of adrenalin in a drug-like induced fashion to recover their lost youth. The name of the game of the post-Vatican II Church for these junkies is rupture with what preceded it. The name of the game for these silly Catholics is "re-imagining the Church, the priesthood, the Mass, Religious Life and the laity. They wish to construct in the most creative way possible a "church" that is quite ontologically different than what Vatican II envisioned quite explicitly in its words and documents.

If we take our understanding of the Catholic Priesthood from post-Catholic drivelists, we go astray and become post-Catholic ourselves. Pope Francis has consistently called us to fidelity to the Magisterium of the Church and the Deposit of Faith, especially as enunciated in the Catechism of the Catholic Church. Taking our cue from these sources rather than the authoritarians who usurp legitimate authority and shove their own down our throats (usually the most clerical of all in the Church, academics) we find the truth:

II. THE SACRAMENT OF HOLY ORDERS IN THE ECONOMY OF SALVATION
The priesthood of the Old Covenant
1539 The chosen people was constituted by God as "a kingdom of priests and a holy nation."6 But within the people of Israel, God chose one of the twelve tribes, that of Levi, and set it apart for liturgical service; God himself is its inheritance.7 A special rite consecrated the beginnings of the priesthood of the Old Covenant. The priests are "appointed to act on behalf of men in relation to God, to offer gifts and sacrifices for sins."8
1540 Instituted to proclaim the Word of God and to restore communion with God by sacrifices and prayer,9 this priesthood nevertheless remains powerless to bring about salvation, needing to repeat its sacrifices ceaselessly and being unable to achieve a definitive sanctification, which only the sacrifice of Christ would accomplish.10
1541 The liturgy of the Church, however, sees in the priesthood of Aaron and the service of the Levites, as in the institution of the seventy elders,11 a prefiguring of the ordained ministry of the New Covenant. Thus in the Latin Rite the Church prays in the consecratory preface of the ordination of bishops:


God the Father of our Lord Jesus Christ, . . .
by your gracious word
you have established the plan of your Church. From the beginning,
you chose the descendants of Abraham to be your holy nation.
You established rulers and priests
and did not leave your sanctuary without ministers to serve you. . . .12

1542 At the ordination of priests, the Church prays:


Lord, holy Father, . . .
when you had appointed high priests to rule your people,
you chose other men next to them in rank and dignity
to be with them and to help them in their task. . . . you extended the spirit of Moses to seventy wise men. . . .
You shared among the sons of Aaron
the fullness of their father's power.13

Two participations in the one priesthood of Christ
1546 Christ, high priest and unique mediator, has made of the Church "a kingdom, priests for his God and Father."20 The whole community of believers is, as such, priestly. The faithful exercise their baptismal priesthood through their participation, each according to his own vocation, in Christ's mission as priest, prophet, and king. Through the sacraments of Baptism and Confirmation the faithful are "consecrated to be . . . a holy priesthood."21

In the person of Christ the Head . . .
1548 In the ecclesial service of the ordained minister, it is Christ himself who is present to his Church as Head of his Body, Shepherd of his flock, high priest of the redemptive sacrifice, Teacher of Truth. This is what the Church means by saying that the priest, by virtue of the sacrament of Holy Orders, acts in persona Christi Capitis:23

It is the same priest, Christ Jesus, whose sacred person his minister truly represents. Now the minister, by reason of the sacerdotal consecration which he has received, is truly made like to the high priest and possesses the authority to act in the power and place of the person of Christ himself (virtute ac persona ipsius Christi).24 Christ is the source of all priesthood: the priest of the old law was a figure of Christ, and the priest of the new law acts in the person of Christ.25

1549 Through the ordained ministry, especially that of bishops and priests, the presence of Christ as head of the Church is made visible in the midst of the community of believers.26 In the beautiful expression of St. Ignatius of Antioch, the bishop is typos tou Patros: he is like the living image of God the Father.27

1550 This presence of Christ in the minister is not to be understood as if the latter were preserved from all human weaknesses, the spirit of domination, error, even sin. The power of the Holy Spirit does not guarantee all acts of ministers in the same way. While this guarantee extends to the sacraments, so that even the minister's sin cannot impede the fruit of grace, in many other acts the minister leaves human traces that are not always signs of fidelity to the Gospel and consequently can harm the apostolic fruitfulness of the Church.

1551 This priesthood is ministerial. "That office . . . which the Lord committed to the pastors of his people, is in the strict sense of the term a service."28 It is entirely related to Christ and to men. It depends entirely on Christ and on his unique priesthood; it has been instituted for the good of men and the communion of the Church. The sacrament of Holy Orders communicates a "sacred power" which is none other than that of Christ. The exercise of this authority must therefore be measured against the model of Christ, who by love made himself the least and the servant of all.29 "The Lord said clearly that concern for his flock was proof of love for him."30
. . . "in the name of the whole Church"

1552 The ministerial priesthood has the task not only of representing Christ - Head of the Church - before the assembly of the faithful, but also of acting in the name of the whole Church when presenting to God the prayer of the Church, and above all when offering the Eucharistic sacrifice.31

1553 "In the name of the whole Church" does not mean that priests are the delegates of the community. The prayer and offering of the Church are inseparable from the prayer and offering of Christ, her head; it is always the case that Christ worships in and through his Church. The whole Church, the Body of Christ, prays and offers herself "through him, with him, in him," in the unity of the Holy Spirit, to God the Father. The whole Body, caput et membra, prays and offers itself, and therefore those who in the Body are especially his ministers are called ministers not only of Christ, but also of the Church. It is because the ministerial priesthood represents Christ that it can represent the Church.

The translations you use seem to be the old ones which assumes English does not have a relative pronoun - "God. You do this. You do that. You do the other thing". Unlike Consolamini I don't aspire to be a theologian. (We're going to have to call him that; he's the history "prof" who's cagey about where his degrees come from; I'm happy to admit that mine are from Durham University and King's College, London). He deploys his coruscating erudition to maintain that the 1970 Missal is fundamentally different from that of 1570 (and the earlier Rites and Uses) which were based on a colossal misunderstanding of the Eucharist.

Now correct me if I'm wrong, but I have always assumed that the Mass, whether in the OF or EF is what the Church intends it to be, and as far as the OF is concerned this is spelled out in the preamble to the GIRM, which stresses the continuity with the theological definitions of the Council of Trent. The texts may be different, but the intention is the same.

This also applies, mutatis mutandis, to the Ordination Rite. The post-Conciliar version has been (rightly) criticized on account of its form and content, but the Church's understanding of the sacerdotal office is the same as it was before the Council (it could hardly be otherwise) so the validity of the new Rite is not impaired.

That's my understanding anyway, but feel free to correct me.