THE CATHOLIC MASS AND IDOLATRY 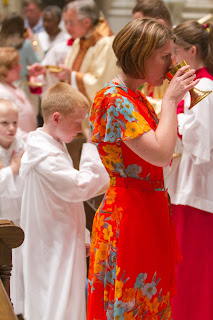 Of course amongst bloggers and those who comment on them, there is great polarization as it concerns the Catholic Mass, which form should predominate and how the Mass should be celebrated concerning all of its accoutrements.

I am not sure, in fact, I think I am sure that this same polarization does not exist amongst rank and file Catholics, at least not in my parish.

But lets talk about those who cause polarization amongst some Catholics. And at the core of this polarization is what I like to call idolatry, worshiping or adoring that which points to God rather than focusing on God who is the center of all and the only source of our adoration and worship.

In fact, I would say that even veneration of these things distracts from authentic veneration which should be associated only with our Blessed Mother and all the angels and saints.

Let me talk about the Extraordinary Form idolaters first.

1. rubrics followed in a OCD fashion, what is euphemistically called "scrupulosity" and leads to a robotic way of worshiping focused only on what the priest does or in the Solemn Sung Mass, also the deacon and subdeacon.

2. The types of vestments used with an obsession on ornate vesture of a previous era, cut, ornamentation, etc.

3. One's private relationship with God is exalted as well as postures that promote this during Mass such as kneeling

Let me talk about the Ordinary Form idolaters second:

1. obsession with the warmth, personality of priests and congregation turning these into the core of the Mass

2. obsession with the actions of doing what is prescribed in the Mass and the signs and symbols of these:

a. the type of bread and wine used and what these look like as "real" food and drink
b. who proclaims the scriptures and how these are proclaimed and where they sit prior to proclaiming as opposed to what is proclaimed
c. that the food and drink of the liturgy be eaten and drunk. How people line up and process in lockstep making sure that they actually eat and drink in a literal and fundamentalistic way in the manner of the Last Supper

3. The communal relationship of the assembly is exalted especially the postures during Mass that promote this such as holding hands

Some have commented that Pope Francis' recent apostolic exhortation does not focus on the Mass very much at all as the Second Vatican Council's document on the liturgy did in terms of the Mass being the source and summit of Christian life and thus of evangelization, new or old.

There is a lament on a conservative blog of all places, that the pope's focus in on one's private relationship to Jesus without much said on the communal (Chant Cafe, southern author).

I can remember shortly after the Council that Catholics in my parish were told that the private, devotional aspects of worship had to take a backseat to the communal, the "I" of the liturgy to the "We." This was shoved down our throats that felt that the communal was where it was at not realizing that they were pushing out the door about 60% of Catholics who didn't want to be communal and only want a lose connection to the Lord and his Church, who wanted to be left alone. Now they are gone as are they children and their children's children.

Of course it isn't either/or but both/and that make up the Church in terms of the psychological need for a private or communal experience of God. When I was a child, I was very private in my participation at Mass and in my devotions, but I loved doing it in a communal setting with other like-minded Catholics, but of course I didn't worship this style of personality or worship.

Pope Francis isn't going to focus on the liturgy like Pope Benedict or is he?

I do think the style of music and participation at Mass is off  the radar screen with him. But he recognizes that we Catholics have lost the vertical aspect of our worship or adoration of God at Mass sacrificed to the communal, horizontal aspect of the post-Vatican II ethos of the Mass.

I think Pope Francis models very well the vertical dimension of our adoration and worship and making sure that the horizontal doesn't become the idolatry of the Mass. His sober almost detached personality as he celebrates the Mass by the book is what I continue to call celebrating the Mass facing the people in an ad orientem sort of way. Mass for him is worship, not entertainment in terms of the externals, rubrics, vesture, music and the characteristics of the horizontal aspects of the worshiping community turned in on itself.

Go to Youtube and watch Cardinal Bergoglio preside at Masses were the tango is danced in front of the altar, and look for the Pinocio giant puppet Masses he presided at. Buenos Aires.....we have a problem.

Bishops go to many Masses where stupid things are done, but watch his deneanor amongst all the antics, complete detachment. I have seen both and the tango completely off the wall but it was entertainment and after the final blessing and dismissal. But it did not belong even there. I wonder if the pope's homily on the loss of the vertical and thus worship or adoration for the purely horizontal and thus entertainment is not a mea culpa for these examples at some of his Masses.

"He recognizes that we Catholics have lost the vertical aspect of our worship or adoration of God at Mass..." Promotion of a truly noble simplicity in the sacred liturgy could remedy this problem. The Roman liturgical tradition has as one of its primary hallmarks ritual simplicity. The remedy must be organic development within this well established tradition.

Scrupulosity is a (thankfully) rare psychiatric disorder, a form of OCD relating to religious or moral issues. Attention to detail in liturgical matters, whether with regard to accuracy in singing or in following the rubrics, is not scrupulosity, and is commendable. Movement is not in the least robotic - it flows with a natural grace which is achieved only when everyone knows exactly what he is doing. As for vestments, someone who wears a minimalist 1960s polyester poncho in a baroque sanctuary is making a statement, and a crass one.

Last weekend I attended a chant course and as is usual on these occasions we sang three Masses, Vespers and Compline. The first Mass was EF, the other two OF, although all three were entirely in Latin, except that the OF readings were sung in English. Everything that could be sung, was sung. The OF Masses were versus populum since the nuns (whose chapel we were using) had put a large floral display in front of the altar and we were loath to move it.

The ars celebrandi was no different for the OF, and the rubrics for the OF were as per the GIRM. We used the old Asperges rite on the Sunday, which precedes the Mass and so is legitimate. The flexibility of the OF allowed us to sing, as the Prayer of the Faithful, the Laudes Regiae as they would have been sung for Charlemagne around AD 800, and which are punctuated by the Christus Vincit, substituting the names of the present Pope and Queen for Leo and Charles.

No polarization here, and certainly no idolatry.