IS POPE FRANCIS REALLY DISINTERESTED IN THE LITURGY AND MORE CONCERNED ABOUT STREET MINISTRY? I REPORT, YOU DECIDE! 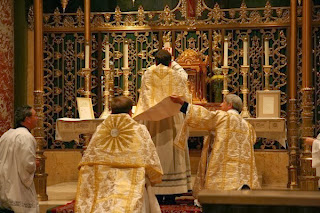 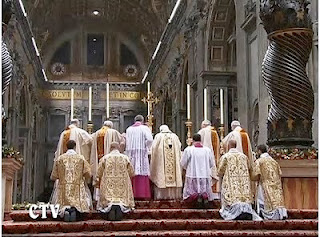 A different kind of ostentatious? 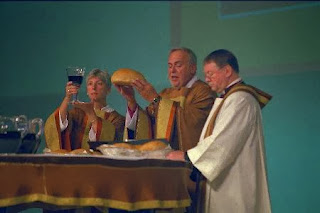 The MSM as well as right and left wing Catholics (catholics) are spinning Pope Francis' recent Apostolic Exhortation, which again I urge you to read for yourself and not the spins. The following news story is from the secular press and I found it in the on-line religion section of the Macon Telegraph. I don't know if it appeared in the hard copy or not.

So please read this first and at the end my very astute comments:

VATICAN CITY — The Catholic Church should concentrate less on procedures and liturgy and get "dirty" and "bruised" by reaching out to people in the street, Pope Francis wrote in a document that was released Tuesday and is seen as a manifesto for his papacy.

The 224-page "apostolic exhortation" called "The Joy of the Gospel" summarized many of the themes and ideas that the Argentine-born Jorge Mario Bergoglio has raised since his election in March.

"I prefer a church which is bruised, hurting and dirty because it has been out on the streets, rather than a church which is unhealthy from being confined and from clinging to its own security," the pontiff wrote.

Francis, who has consistently shunned papal pomp and protocol, railed against an "ostentatious preoccupation for the liturgy ... without any concern that the Gospel have a real impact on God's faithful people."

"In this way, the life of the Church turns into a museum piece or something which is the property of a select few," he warned... (READ THE COMPLETE ARTICLE AT THIS LINK:
Read more here: http://www.macon.com/2013/11/26/2799842/francis-issues-manifesto-for-reform.html#storylink=cpy

Don't get me wrong, I love the liturgy and I am decidedly high church and have led the congregations where I influence the liturgy into high churchdom! But I dislike "an ostentatious preoccupation for the liturgy...without any concern that the Gospel have a real impact on God's faithful people."

How much time, talent, and treasure and sumptuous amounts of treasure did we squander focusing in on the liturgy and liturgical renovations in the 1960's, 70's and 80's and 90's and in terms of iconoclasm and forcing the laity to accept the iconoclastic liturgy of the post Vatican II era and what liturgical theologians and their enabling priests and bishops promoted?

We formed liturgy committees and invested them with such power that each Mass had to have a theme and be different from the other Masses and the Masses became fragmented in parishes thus separating parents from children and their teenagers all with their own style of music and ethos!

In the meantime we made many Catholics angry and the destruction of sanctuaries and having meetings after meetings to shove the new theology of the assembly down their throats. Beautiful vestments and altar accoutrements were thrown into the dumpster only to be rescued by antique dealers and money galore was spent on renovations (not normal upkeep and restoration) of sanctuaries that were horrible in comparison with what was ripped out.

Then there were and still are the music wars as we moved from the so-called European model of chanting the High Mass (Sung Mass) to modern idioms of music based upon vapid, trendy modern styles that change with the blowing in the wind, such as folk, and then what was called contemporary and now what is called Broadway sounds based upon the entertainment industry's view of what is "now" and of our culture.

And as it concerns the music of the Mass, too much emphasis was given to hymns and expanded the kinds of hymns Catholics sing, first to the good Protestant idioms and then to newly written so-called Catholic hymns, impossible to sing and dated as soon as they debuted and with the music industry taking control of Catholic music and publishing throw away hymnals, missalettes and constantly trying to sell new stuff! But what was forgotten in all the new hymns Protestant or Catholic thrown constantly to congregations tired of being cajoled and forced into singing with lengthy rehearsals before Mass is that hymns are not the sung idiom of the Mass, the Mass is, The Introit and other antiphons as well as the words of the Mass of both the priest and laity!

I AGREE WITH POPE FRANCIS! Keep it tasteful and simple no matter what form of the Mass is celebrated, Ordinary or the normative form of the Mass, Extraordinary, or now the Anglican Use Mass.

I have witnessed Pope Francis celebrate Mass and he does it solemnly, seriously and keeps his personality out of it. There is no creativity. The Vatican Masses provide booklets to make sure the thousands of people present can participate and they use normally the Mass of the Angels to foster this actual participation and even print the words and music of the Gregorian Chanted Introit, Offertory and Communion Antiphons.

The most ostentatious music we have in the modern Mass is contemporary music accompanied by all sorts of instruments and in the most triumphal way possible. Go to any bishop or priest's ordination and you will know what I mean! Compare that to the simplicity of Gregorian chant (simple or complex) and the sobriety of the core music of the Mass, chant and normally without accompaniment!

I think what the Holy Father is saying is don't recreate the Mass every time it is celebrated. Stick with the Book, the Roman Missal and celebrate it as prescribed and then go and proclaim the Good News by the manner of your Catholic life at home, work, play, politics and business!

Don't make the Mass into a museum piece, which is exactly what the release of the 1962 missal had become prior to Pope Benedict. Now it is mainstream and celebrated as a normal experience of the legitimate forms of the Mass, but not prior to SP in the post Vatican II era.

And with all the preoccupation, ostentatious preoccupation of the Liturgy what has happened to our Catholic Church in the past 50 years? We lost our Catholic identity not only at Mass but in the world, producing pro-choice Catholic politicians and judges and lawyers. We produced Catholics with a contraceptive mentality and radical feminism that embraces not only artificial means of contraception but also abortion and radical feminism trumps Church teaching as it concerns Holy Orders and Matrimony in the minds of most Catholics.

And helping the POOR is just merely an extension of what the government does or other charitable organizations (NGO's) rather than a form of Catholic evangelization bringing the Good News of the Person of Jesus Christ to the world, especially the poor. What difference Do the poor experience in a government handout to them compared to a Catholic handout. Are these the same in their minds? Do the poor see us Catholics merely as social workers or religious workers who point to Jesus Christ rather than themselves???????

So I agree with Pope Francis, as usual!

I just wonder what he means by "ostentatious preoccupation with the Liturgy." On the surface, it sounds dismissive, egalitarian, and collectivist. As I have said before, form and content cannot be separated in the Liturgy…like the Sacraments, the sign and the efficacy cannot be separated. This Pope is not going to move the Church away from socialist humanism…it does not matter how much he insists on doctrine and such. He either doesn't get it or he does not care.

The third picture shows a protestant communion service (note the woman deacon? priest? holding up a decent-sized glass of wine). Cheers, m'dear, if you serve those measures at your dinner parties, you can count me in!

Ostentation means "showing off". There is a certain US cardinal who does this shamelessly during Mass (I won't name him because of the new strict comment rules) but when it comes to a dignified ars celebrandi he would do well to emulate Pope Francis.

Ostentation oriented through Christ and towards the Father is surely not only permissible, but necessary. We gather for the Sacrifice of the Cross precisely to "show" the Father our active love for His Son. Right?

Perhaps the Holy Father speaks here of troublesome liturgists, some of who are rather flamboyant, even ostentatious.

I'm with you, Fr. McDonald. We need to take the Sacred Liturgy out from under the bushel basket at let its light shine all the way to the margins of society. Ostentation that remains hidden is a contradiction. Let the Sacrifice of Christ shine brilliantly on the poor, the immigrant, the widow and the orphan!
(And, I hope I meant "some of 'whom'..." earlier.)

"Evangelization with joy becomes beauty in the liturgy, as part of our daily concern to spread goodness. The Church evangelizes and is herself evangelized through the beauty of the liturgy, which is both a celebration of the task of evangelization and the source of her renewed self-giving..." (EG 24)

FrJBS, Your quote from EG 24 says everything there is to be said about evangelization and ecumenicism.

Before Vatican II, "obsession" with the liturgy was unnecessary. For the most part, proper liturgy was in place--if not always properly participated in by all--and therefore extended concern with or discussion of liturgical details was generally unneeded.

Now however, obsession with the liturgy is vitally needed. It is "broken" in ordinary parish practice, and must be "fixed" if the so-called new evangelization--a resumption of the old missionary spirit that has been abandoned post Vatican II--is to get off the ground. If our pope and bishops are not obsessed with the liturgy, then it will go nowhere until they are replaced with ones who are, and still more generations of Catholics will be deprived of their rightful heritage.

"ostentatious preoccupation with the Liturgy." What does that even mean? That in my opinion is equivelant to liberals in politics always using the race card. It is nothing more than a liberal trying to silence opposition. Tell this to the Eastern Churches and see what kind of response you get. This blindly following of something just because Pope Francis likes it is a little scary. Pope Benedict wore lace and fiddlebacks did you follow his example blindly? This is really getting to be silly.

How come Pope Francis can manage to kneel and wash the feet of women in violation of the rites of the Church but will not kneel on a prie dieu in the presence of the MBS? He doesn't genuflect after the consecration of the Mass either. I understand he may have physical problems but how come he makes an effort to overcome them for individuals but not towards the MBS? It's a valid question and it's not being disrespectful to Pope Francis and it's not accusing him of anything it's a question. I believe we are still permitted to ask questions and voice opinions.

The "theology of the assembly" is hardly new, Good Father. It is an ecclesiology that is based in the Scriptures and that reflects a patristic understanding of the nature of the Church. The church is the PLEROMA or the QAHAL, both of which are biblical notions.

And it is worth remembering that the Sanai covenant was established between God and the People of God, Israel.

Chip, did you just say something?