MATRIMONY LITURGY MYSTERY SOLVED AND LET NO ON PUT THE MATRIMONIAL RITE ASUNDER! 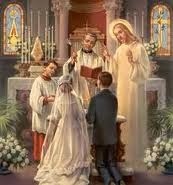 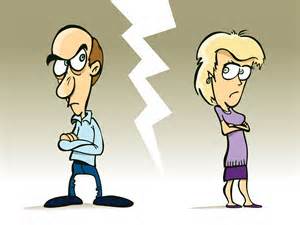 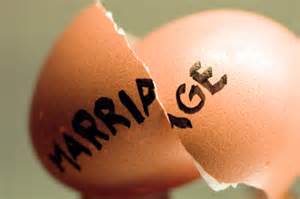 Since the new Roman Missal in our glorious new English translation was released, I have been discombobulated about the Nuptial Mass. Only part of the Nuptial Rite has been translated, the specifics for the Mass parts, but the rest is about to be promulgated toward the end of 2014! That's a scoop folks.

But in the Roman Missal's Nuptial Mass, the mystery to me is that a new rubric has been added to it. It states that after the greeting of the Mass, the priest omits the penitential act but the Gloria is chanted or said.

My discombobulation comes from how to get from the Greeting to the Gloria in a smooth fashion. Usually if the Penitential Act is omitted in any Mass, something else replaces it, such as the Rite of Sprinkling Blessed Water.

Well the mystery is solved. The revised Rite of Marriage will have two options for introductory sentences for the Nuptial Mass and these are very good. I might be getting a copy of these but don't have it yet.

But the thing that many liturgists in the USA and priests to boot don't know is that the free-standing Kyrie can still be sung as this isn't really, when chanted alone, a part of the Penitential Act. So the Introductory sentences could be said that would then lead to the Kyrie and finally the Gloria and Collect. MYSTERY SOLVED!

Now for a little tidbit of information that will send those who hate our new English translation further into a grand hissy-fit. When the priest declares that the couple are joined as husband and wife, he says the following:

...AND WHAT GOD HAS JOINED MAY NO ONE PUT ASUNDER... (or something like that, but asunder returns! Oh the glory and the consternation this will cause some who just don't get it! God is good.
Posted by Fr. Allan J. McDonald at Tuesday, November 05, 2013

I do wish Our Lord's dear bishops would spend less time on such projects as developing impossibly complex rules for holy days of obligation, and more time on getting these long-ago published books translated into English.

And we Catholics will continue to "believe" (pretend) that marriage is for life while the farcical rite of annulment, aka "Catholic Divorce", continues. Who do we think we're fooling?

Anyone familiar with the annulment process knows that it is neither a farce nor a divorce.

It is easy to look at something from the outside and misunderstand or misrepresent it.

Good info is at http://www.americancatholic.org/newsletters/cu/ac1002.asp

Father, do you know when this revised Rite of Marriage will take effect here in the U.S.? My fiancee and I are getting married next August and I'm wondering if we'll be blessed to use the revised rite. I went the USCCB website's Rite of Marriage page and it is no longer there. Is this a sign that the revisions will be promulgated soon?

We were told that all that remains is for the Conference of Bishops to approve it with any recommendations they might make and that would be next week in Baltimore at their fall meeting and then it comes back to Rome for Rome to rubber stamp it. So it looks like by Advent of 2014, just one year away, but if it is approved, I'm sure you can get a priest to do it illicitly for your wedding if he can find of copy of it which by then should be out and about!

Thanks, Father! But would it really be alright to use the new rite of marriage before Advent 2014? My fiancee and I would love to experience the new rite, but we wouldn't want to do anything illicit for our Nuptials. Would this be something we would need to request from our Bishop?

"Asunder!" Looks like the Ordinariate's Anglican Use and the Novus Ordo are also mutually enriching each other! Laus tibi Christe!

Pater Ignotus, I am familiar with the annulment process. I (respectfully) repeat my opinion about what I think it is, no matter how you or the institution try to spin it. Perhaps it is easier to look at something "from the outside" and be objective and honest about what one sees than for an insider to have the courage to say that the king is wearing no clothes.

Most of the new translation is already in place for the Nuptial Mass in terms of Opening Collects, the Nuptial Blessing and the Final Blessing as well as prefaces for the Eucharistic prayers.
What is lacking is the introductory statement at the beginning of Mass after the greeting and the three questions prior to the actual vows and then the vows and blessing of rings.
While it may not be "kosher" to use the vow parts and blessing of rings now, there would be no problem in using the introductory statement as many priests make something up anyway, so why not use what will be official. So you might suggest at least that.

The modern practice of inserting the marriage ceremony into the Mass between the Gospel and the Offertory (it also happens with Baptism and Confirmation) is not, IMO, a good one. It was noticeable that when Benedict and G.Marini drew up the Ordo for the recent Papal Installation Mass, the conferring of ring and pallium was moved to the beginning.

An interesting sideline. The pedilavium (foot-washing) on Maundy Thursday is not traditionally a liturgical action. It was once performed by the monarch; Mary Tudor washed the feet of poor women. In convents the Mother Superior washed the feet of the sisters. In 1955 Annibale Bugnini inserted it into the Missa in Coena Domini, after the Gospel, which appeared to give it a liturgical character.

When Pope Francis washed the feet of a Muslim woman he was, wittingly or unwittingly, signalling that the pedilavium is, as it always was, an extra-liturgical action.

Anon - Divorce presumes that a marriage existed and has dissolved.

Annulment presumes that a sacramental marriage did not, for a serious reasons, ever exist.

Divorce allows for factors that arise at any point in the marriage to be the basis for legal separation.

Annulment requires that the ground exist from the time of the marriage.

Divorce can be granted for almost any reason. "We can't agree on who controls the TV remote control" is sufficient.

Annulment requires that a serious impediment be proved.

No, annulment is not divorce. No, we are not "fooling" anyone.
No, the process is not a "farce."

You may be of the opinion that annulments are too freely granted - that's fine. But there is a world of difference between civil divorce and canonical annulment.

Once again, Pater Ignotus is right, which I'm pleased to say. God bless him. That said, couples do seem to have a surprisingly difficult time entering into a valid sacrament of matrimony.

JB. I agree that couples are struggling to enter marriage. Given the cultural realities of the West - extreme individualism, significant immaturity, materialism, and the like - I don't think that the number of decrees of nullity should be surprising, actually. Discomforting,yes,but not surprising.

Pater Ignotus: Thanks for the annulment tutorial. My problem with it, however, is not because I am unfamiliar or uninformed, but rather because I am informed, familiar and experienced. We just don't agree. I can live with that. Hope you can. I would be grateful, though, if you, or anybody else on the blog, could post a tutorial on the cancellation of Limbo...did all of the babies, who had been there, many for eons get an apology from anybody? Do deceased babies now go to heaven with original sin still in place? Maybe there is no original sin....anxiously awaiting, ANON

Limbo was a theological opinion that gained wide acceptance, but it was never a part of the Traditional teaching of the Church.

A good tutorial can be found at http://newadvent.org/cathen/09256a.htm

No apologies are needed to any infants who spent "eons" in limbo, since there is no time in eternity.

Regarding infants who die without Baptism, the International Theological Commission offers in THE HOPE OF SALVATION FOR INFANTS
WHO DIE WITHOUT BEING BAPTISED: "103. What has been revealed to us is that the ordinary way of salvation is by the sacrament of Baptism. None of the above considerations should be taken as qualifying the necessity of Baptism or justifying delay in administering the sacrament.[135] Rather, as we want to reaffirm in conclusion, they provide strong grounds for hope that God will save infants when we have not been able to do for them what we would have wished to do, namely, to baptize them into the faith and life of the Church.

And the Church teaches in the Catechism: "1261 As regards children who have died without Baptism, the Church can only entrust them to the mercy of God, as she does in her funeral rites for them. Indeed, the great mercy of God who desires that all men should be saved, and Jesus' tenderness toward children which caused him to say: "Let the children come to me, do not hinder them," allow us to hope that there is a way of salvation for children who have died without Baptism. All the more urgent is the Church's call not to prevent little children coming to Christ through the gift of holy Baptism."

As beings made for supernatural happiness (heaven), the eternal state of "natural happiness" that was Limbo would be insufficient to fulfill the desires of those whose deepest desire is, as St Augustine put it, "rest in God."

I have been a Catholic for a very long time...12 yrs of Catholic schooling. I don't remember hearing anything about Limbo being just an opinion until Pope Benedict pulled the plug on it in 2007. It had been going on for 800 yrs or so, I think. My, my...

I have been a Catholic for 55 years... 22 years of Catholic schooling. In that time I have learned to distinguish what is and, as importantly, what is not (such as Limbo) a part of the Tradition of Faith.

A Catholic is not free, however, to maintain that belief in Limbo is a necessary point of doctrine.

The devil is a guy? Like God, I guess.

Yes, the Devil is a guy. Didn't you see in all those medieval pictures that he has a hangy down? However, I saw a woman in heels and a blue dress yesterday that could make me change my mind. See: Elvis: "Devil with a Blue Dress On."
That God is male has long been established. See: Genesis.
BTW, Anonymous, the chip on your shoulder indicates wood higher up.

First remove the plank from your own shoulder, then you can better remove the chip from your neighbor's.
ANON

Anon, I never mentioned removing your chip. You may keep it so that you will always have an agenda.

I actually like the abruptness of the gloria in the nuptial mass.

"The grace of our Lord Jesus Christ, and the love of God, and the communion of the Holy Spirit be with you all"

Right after the procession it is a good reminder that we are involved in something very holy and is being celebrated according to the ritual of the Church.