WELL, THE NEW ONE MAKES ME LIKE POPE PAUL VI'S ONE BETTER! NEVER THOUGHT I WOULD SAY THAT! 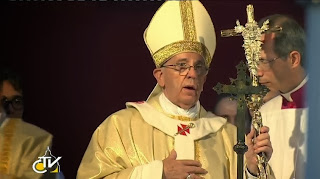 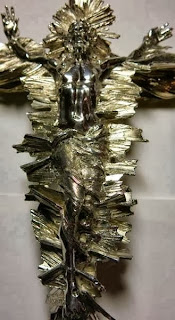 Yes, I think I like this one better! Who would have thunk? 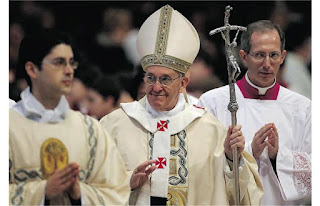 The Mass with the new ferula was for All Saints at a nearby Roman cemetery. The Holy Father wears very nice gold vestments: PRESS HERE TO VIEW THE VIDEO OF THE MASS!
Posted by Fr. Allan J. McDonald at Saturday, November 02, 2013

Two candles on the altar - so much for the "Benedictine" arrangement. The ferrula is over-fussy - those without a corpus look better. Once again the hackneyed Missa de Angelis - don't people realize that if you confine yourself to one Mass setting on the grounds that everyone knows it, no-one can get to know anything else?

Papal liturgies have been no great shakes for a long time, although there was a marked improvement from 2007 to 2013. What we have now is a vernacular Low Mass with a few concessions to Latin chant. I can get far better at home.

I never thought I'd say it, but I, as well, like Paul VI's ferula better. This one is just...odd

Doesn't "Benedictine arrangement" refer to the placement of the cross in the center of the altar? Benedict has proposed this arrangement for decades. I've never read anything by him about the number of altar candles.

Just don't look directly at this new crosier, and you'll be fine. It's only by looking directly at it that you turn to stone!

Does it really matter. No matter what's done Francis looks like that guy who calls himself Pope Pius XIII on the internet. He wears a cheap cassock like Francis and uses a broom handle with a crucifix nailed to it. It doesn't matter what Francis says or does anymore. The best thing is to ignore him until his death (there is no way he will ever give up his power) and just pray that the damage he inflicts isn't too bad.

I can't sat I am a fan of this ferula. The corpus is lost in the sun-ray mandala while the staff is WAY too busy. I can't think it is easy to grasp.

I think there are culture; limits for each Pope as a man. I am not sure Pope Francis is sending a message as much as simply showing his personal taste.

I don't really care for it, but artistically it isn't horrible.

Yes indeed the Benedictine altar arrangement refers to the crucifix placed dead center on the altar facing the celebrant. The candles can be from 2 to 4 to 6 or more. John Nolan is wrong. At the Vatican liturgies I have eyewitnessed the candles 7 of them returning to a straight line across the altar and not angled.

An FSSP Priest I knew back in the 90's used to refer to this style of depiction (Risen Christ superimposed over the Cross) as a "touchdown Jesus."

Should not this hymn be in "Breaking Bread?" There is another, similar, glory and praise hymn, "Ain't No Flies on Jesus," which should also be included.
And, of course, that old standard Catholic tune, "Plastic Jesus," should certainly not be omitted.

A depiction of "Touchdown Jesus" in mosaic can be found on the facade of the Hesburgh Library at Notre Same, all 10 stories of him. Next to the library entrance is the bronze "First Down Moses."

It looks like a cheap Chinese XMas decoration. It is ugly. Sometimes less is more, and simple cross is way better than this... thing. Monsignor Marini looks delighted, though haha.

Gene, you must be thinking of "There ain't no flies on the Lamb of God", written by the American evangelist Mrs Melrose Ape. (Evelyn Waugh, 'Vile Bodies', 1930).

This Fisheaters thread has some good pics of the new ferula:
http://catholicforum.fisheaters.com/index.php/topic,3461818.0.html

Looking at the first pic, Francis lookes confused by this blinged out ferula. This is not a ferula for one who claims to be humble, but for a budding Christian rap star. The ferula was donated to Francis by Goldlake, a mining corporation that is part of major Italian cement holding Gruppo Financo, with mining concessions in Argentina and Honduras (from which came the metals used for this staff).

My guess is Francis will use it a few times out of respect for those who donated it to him, then he will quietly either put it in storage, or maybe sell/auction it with the procedes going to help the poor.

The term 'Benedictine arrangement' certainly implies a central crucifix but in practice also affected the number and placement of candles (including the seventh candle) to reflect the traditional practice. Many churches have adopted this, to the dismay of progressives who talk disparagingly of the "caged celebrant" effect. If you look back at Benedict's installation Mass you will see that there are no candles or cross on the altar.

When Benedict celebrated Mass in St Peter's the candles were sometimes echeloned and at other times aligned along the forward edge of the altar (before Paul VI opted for stumpy candles and a tiny crucifix, cross and candles were placed along the centre line).

Fr AJM tells me I'm wrong and then in his very next sentence concedes my point. It's not about what Cardinal Ratzinger may have written, it's what he and Guido Marini actually did.

The dreadful Continental custom of having two candles at one end and a vase of flowers at the other is the antithesis of the 'Benedictine arrangement' and yet Francis says his daily Mass at such an altar.

Why would non-Benedictines adopt a Benedictine style altar arrangement?

So, if a congregation uses balloons and plastic flowers on the altar because "because they like it" that would be sufficient reason? I think not . . .

Anon, Post-Vat II, things like that have been done all the time. Been to a clown Mass?