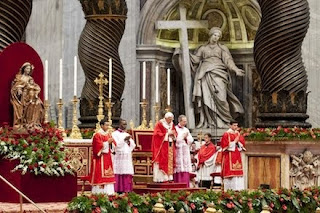 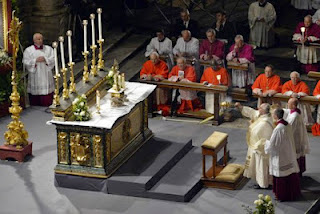 You can view Pope Francis' ordination of the new bishop at Saint Peter's on Friday afternoon at 4:30 PM, November 15th. I could have concelebrated this Mass, but was unable to do so. The tourists/pilgrims in Rome are down in number and one can tell this by the half full basilica.

YOU CAN VIEW THE ORDINATION BY PRESSING HERE!

If anyone knows how I can get the "embedded" code when using my iPad to actually post the video, please let me know. Although linking it works just as well.

Please note the wonderful "Benedictine Altar Arrangement" which Pope Francis' has maintained and also allowed the candles to be placed directly across the altar rather than angled.

There are some nice "ad orientem" shots of the consecration with the camera behind His Holiness. I know that the Holy Father distributes Holy Communion only to the deacons of the Mass and I have seen him do so while they either stand or kneel. It is not shown in this video how he does it, but other shots show communicants receiving both ways.

Please note, much to my phobic relief, that concelebrants receive Holy Communion under both forms (required for all priests who either celebrate or concelebrate the Mass) by way of intinction as the Minister holds both the ciborium and chalice for them to do so.

Overall, this is a stunning Mass, primarily in Italian but with all the parts, including the official Introit, chanted in Latin. Is this the wave of the future? Vernacular for the majority of the Mass, but the Introit and other antiphons, including the Kyrie, Gloria, Credo, Sanctus and Agnus Dei in Latin (obviously Greek for Kyrie)?

The final blessing and dismissal are also in Latin (oddly enough).

Now the following is the last episcopal ordination that Pope Benedict XVI celebrated and it was for a few more men elevated for service as bishops including Pope Benedict's personal secretary Archbishop Georg Ganswein, who I think is the most fascinating man in the Catholic Church today, third only to the two popes. What other man in the history of the Church serves two popes at the same time?

YOU CAN VIEW THIS ORDINATION BY PRESSING HERE (an interesting side point is that the choir of St. Joseph Church in Macon, Georgia is in attendance at this Mass. I was to make the pilgrimage with them but since my mother had died the previous September, I wasn't up to it at the time so Fr. Dawid Kwiatkowski went in my place.) They are sitting directly behind the papal altar. What an historic event to be able to experience. Of course none of us knew what a bombshell Pope Benedict would offer the world with his resignation the next month!

Please note that the altar candles are placed at an angle at this episcopal ordination, which as with Pope Francis is alternated for diversity I guess by the MC.

Any other differences in style?