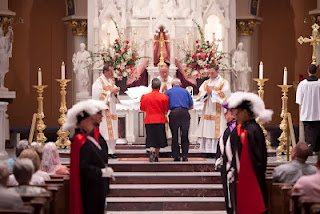 Just how many sacrifices are offered at the Holy Sacrifice of the Mass? Of course, everyone should answer the one and only Sacrifice of Jesus Christ at Calvary brought forward in an eternal way on every Catholic altar in the world. Only one sacrifice is offered!

Oh really? Well then there must be some mistake in the revised English translation of the Roman Canon which the priest prays on our behalf in the first paragraph following the Sanctus:

"...that you accept and bless + these gifts, these offerings, these holy and unblemished sacrifices...."

Sound like sacrifices in the plural to me, how about you?

But of course we only offer one Sacrifice of Jesus at Mass in an unbloody way, so to what is this sentence referring? Well, Msgr. James Moroney says it refers to all the sacrifices of the clergy and laity together in their lives to live lives in union with Jesus Christ's sacrifice in and through His Church as they strive to make their lives holy as married people, single, in their work, family lives and so on.

Thus the presentation of the offerings at Mass has not only a practical aspect to it but a very spiritual aspect also, similar to the priest washing his hands at Mass which originally had the practical aspect of washing his hands which eventually had an added spiritual meaning laid upon it. The same is true too with the mingling of the water and wine at Mass, in the practical sense to cut the strong vinegar like wine, but also now in the spiritual sense of divinity and humanity mingling.

How cool is that. Don't omit the presentation of the offerings at Mass on Sunday and try to explain that it is not just a practicality like the priest washing his hands, mingling water and wine together and placing a particle of the Sacred Host into the Precious Blood but there are spiritual meanings too that today are even more important to understand and appreciate.
Posted by Fr. Allan J. McDonald at Monday, November 04, 2013

I always thought "our sacrifices" meant the envelop you put in the basket. At the time I didn't know Holy Mass was the re-presentation of Calvary as a bloodless Sacrifice.

What if a pewsitter hasn't made any real sacrifice the past week? Now what do the words mean to him?

What if the pewsitter doesn't believe the one sacrifice of Christ is made present at that Mass he attends, and has made no real sacrifices in his life for Christ nor has he offered his sufferings to Christ either?

The bringing of the offerings by the faithful is the revival of a very old custom. However, the only things that should be brought are bread, wine and money as alms for the poor. Like a lot of things, the offertory procession has in some places been abused which dilutes the symbolism, with all manner of things being brought to the altar, even babies! It is also illicit for the wine to be brought up in the chalice (I have seen this done) since the rubrics direct that the chalice be prepared by the priest or deacon.

The Westminster Archdiocese has had to issue a directive forbidding these distortions and explaining why.

The rubrics say the gifts may be "brought by the faithful or collected in the church" (GIRM 73). My question is, is it better (a.) for the congregation to process to the altar with their donations, or (b.) for ushers to collect the donations in baskets that are then brought forward?
Using ushers is easier, but which method better communicates the proper liturgical significance here?

The idea of the priest or deacon standing at the edge of the sanctuary with a large receptacle while the entire congregation troop forward to toss their money in is both impractical and undesirable. What if I donate by standing order or direct debit? The Church is too often seen to be moneygrabbing, and such a spectacle would give the impression that the dosh was a hundred times more important than the bread and wine. Keep the collection discreet and preferably pass the plate round while the Offertory Rite is in progress.