WHY THERE IS A NEED FOR THE NEW EVANGELIZATION AND WHY IT WILL FAIL IF THE LITURGY IS NOT SAVED! 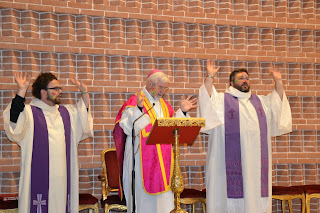 Mr. Ralph Martin, author of the recently published book The Urgency of the New Evangelization: Answering the Call, said that the new evangelization comes from 50 years ago, from Vatican II reforms and direction in the Church. Before then, evangelization was for “the salvation of souls, [and] the very central motivation is people living in sin, living in darkness, living idolatry, cut off from the light of Christ, cut off from the truth of Christ, cut off from salvation,” he said. Converting people to Christianity was how people could be put on the path to salvation. Evangelization wasn't concerned with people already in the Church.
But a concept in the Church gained traction that “people can be saved already in ways without hearing the gospel,” Mr. Martin said. There wasn't a need to convert them to Catholicism. So missionaries dedicated themselves to human development, to helping others without also emphasizing soul salvation and attention to the story of Jesus. “A tailspin set in in missionary orders that hasn't really been resolved to this day.” Classic evangelization was becoming rare in Catholicism. And church members were leaving, too. Leaders looked for reinvigoration from their Christian gospel.
Popes Paul VI and John Paul II published documents that developed the new evangelization concept. Mr. Martin said that Pope Paul's “Evangelization in Our Day” is the document most quoted by Pope Francis. He quotes Pope Francis as saying, “We need to go to people and tell them about the mercy of God, tell them about the love of God.”
Tied into this egalitarian approach to salvation and that everyone is going to be saved, no matter their religion or even no religion at all, was the disintegration of the Holy Mass after Vatican II in form and ritual. The laudable aspect of striving to engage the laity into full, conscious and actual participation was approached in the most clerical way possible and that is that the laity are too stupid to understand the Mass in Latin or the vernacular with all of the accompanying signs, symbols and rubrics of the Mass especially when celebrated ad orientem.

This clericalism of academics in the Church sasw its ugly head rear again when the marvelous new translation of the Mass from its Latin texts was translated literally for use in regular parishes throughout the English speaking world. Academics and some bishops plainly said that the laity, and some priests were just too stupid to understand the hard words that were being incorporated into the new translation, like "dewfall" and "consubstantial" and that the sentence structures were just too difficult for dum priests and laity.

So the whole premise of the contrived Mass after Vatican II including the silly "dynamic equivalency" of translating the Latin text into modern languages all hinged on how stupid the laity were and grassroots clergy too. They needed something simple that they could understand and everything had to be obivous.

So this meant the dumbed down texts we got for the Mass and the "noble simplicity" which in actuality was "first grade liturgics for dumb Catholics." This is how we were preceived by the clericalists in the Church, primarily academic clericalists which is a double whammy!

So after Vatican II, not only was the prescribed liturgy banal, but it was made even more banal and irreverent by experimentations and the cult of clericalism in terms of the creativity priests took in celebrating the Mass and often with his cronies in the pairsh's liturgy committee complicit in it.

Thus, the first complaint from Catholics who truly loved the pre-Vatican II Mass was that the new Mass was was too simple and too "protestant" and there was a tremendous loss of reverence as reverence had been understood prior to the 1960's. All this was tied into the loss of good rubrics that led to reverence, in terms of bows, genuflections and awe and wonder. Many priests even refused the two genuflections at the consecration and would show the consecrated elements begrudgingly if at all.

People were forced to stand to receive Holy Communion and often priests forced them to receive in the hand against their wishes. Those who wanted to kneel were made to feel as paria.

All of this led to the loss of faith that so many Catholics on the periphery of the Church and in the center also had maintained even if weakly so.

Save the liturgy and save the Church may sound like a cliche from an entrenched blogger but there is quite a bit of truth to it and when coupled with a renewed sense of the truth of the Catholic Church that we we have in the Gospel fullness and that outside the Church there is no salvation, then the new evangelization might actually bear some fruit in drawing back the lost and gaining new believers for Christ and His Church.

FR, Wow! Your writing this makes me wonder why you don't change even more at St. Jo's. You just made my morning…but you still fuss at me for saying basically the same thing…maybe it is the delivery…LOL! God bless you in your efforts.

Father McDonald,
I could'nt agree more! This is why the typical parish liturgy status quo of "Glory and Praise" style music and the dominance of the rest of the 70's-onward liturgical ethos is so frustrating.

Why can't we base our liturgical practices and music on the actual words of Sacrosanctum Concilium (read in the context of the pre-Novus Ordo time in which is was written), the 2007 document by the USCCB, "Sing to the Lord" (which says that while vernacular is the norm that all ethnic groups should learn the basic Latin/Greek chants of the Kyrie, Sanctus and Agnus Dei--with the Credo and Gloria to be learned afterward) and Summorum Pontificum (which not only satisfies the desires of those who love the older form but also is a way of speeding up the re-introduction of some Latin and other more traditional liturgical practices back into the Ordinary Form).

I think I have been misunderstood (even by my pastor)as a hardened EF advocate who wants to return exclusively to the EF (which is not true--I just think it should be ADDED in parishes as an essential part of the program of liturgical renewal). Why would what I have just proposed as a guiding set of principals be considered "dangerous" for a parish?

Our Bishops could change things for the better overnight. The mystery is why they approve the use of disrespectful music in the Mass everywhere.

O my! Someone had better tell the dictionary publishers as all describe dewfall as follows:
n.
1. The formation of dew.
2. The time of evening when dew begins to form.

Anonymous, night doesn't fall, either. Neither does wind (windfall), meetings (the meeting falls on Fr.), or words (stupid statements just fall from Anonymous' lips). It is a poetic usage. Get a life or this will be your downfall,,,

Dew does not fall.

"Dew forms when a surface cools through loss of infrared radiation down to a temperature which is colder than the dewpoint of the air next to that surface.

Dew most often forms on on evenings or nights when there are few clouds, since the greenhouse effect from clouds can keep surfaces from cooling by infrared radiation loss to outer space. Calm winds at night also contribute to dew formation because a windy night keeps the lowest layers of the atmosphere warmer, and also helps evaporate any dew that might begin to form on surfaces.

Dew is made of liquid water that has condensed from some of the water vapor contained in the air."

Dew is formed by condensation. Dew does not "fall."

If I can veer away from the scientific discussion about condensation for a moment, I'd like to make another point: This post mentions several times that those translating and jimmying around with the Mass considered the laity too dumb to handle Latin and, later, to handle a different translation. As a former schoolteacher, I would remind us that students will rise to the level of their teachers' expectations.

Which begs the question: Just WHAT did the promulgators of the New Mass expect?

Anonymous, You are incorrect. If you will go and stand under a big oak tree on a dewy morning you will see your error.
How unfortunate that it fell to Anonymous to have so little literary understanding. He has fallen upon this blog like some disoriented bug, flittering around a light at nightfall until, exhausted and wing-weary, he falls into a bug zapper…applause all around.


If whenever I have a "falling out" with another person, perhaps someone like Anonymous will be around to "pick me up".
And speaking of insects, Gene, perhaps Anonymous can explain
how a "lightening bug" came to be.
I'll be looking for them when the next thunderstorm comes through.

Methinks some of you fail to appreciate the contribution of Anonymous here. His comments are very informative, for they exemplify in a way that all can understand the linguistic attitude of those who destroyed the liturgy. So let's give credit where it rightly falls.

Once again, Henry, your superior insight shames me… : )

Dew doesn't fall. It forms as condensation within the meteorological parameters already stated.

The use of "dewfall" in EP II is "Make holy, therefore, these gifts, we pray, by sending down your Spirit upon them like the dewfall..."

The archaic belief was that dew fell from above like rain. So it is understandable why an ancient prayer uses the image of dew "falling" to symbolize the "sending down" of the Spirit at the epiclesis.

Dew, however, does not fall.

"Dewfall" is a lovely and useful expression of belief, but, it must be remembered, that dew does not "fall" from anywhere.

Anonymous, how nice of you to explain that to us since none of us must have had high school biology and chemistry. Now, please explain toy us windfall, nightfall, and evenfall. We are just learning so much...

It falls to me to observe that we seem to be falling over ourselves to show how others are falling down in their English usage. Perhaps it is dew to the fall, or the Fall.

Gene - You make the same error Fr. McDonald made, taking those words out of context.

If you will kindly refer us to the location in the Roman Missal of the words whose meaning you seek, I will most happily and readily respond.

EP II has in the original Latin "Haec ergo dona, quaesumus, Spiritus tui rore sanctifica ..." (Therefore sanctify these gifts, we pray, with the dew of Thy Spirit). The former English version omitted any reference to dew, and the current translation opted for "dewfall" less for poetic reasons than because the word "dew" when pronounced carelessly sounds like "Jew".

Furthermore, it not an ancient prayer. It contains elements of a so-called Canon of Hippolytus (a third-century antipope), but this is not one of these elements. The (reconstructed) Hippolytus text has no epiclesis. There is also no evidence that it was ever used as an anaphora in the Roman Rite. Interestingly, many of the "Hippolytan" expressions are in EP II's proper preface, which is hardly ever used.

Cardinal Franjo Seper, Ratzinger's immediate predecessor at the CDF, refused to use EP II, and there is a growing consensus among liturgists that it should be dropped altogether.

Robert: "Just WHAT did the promulgators of the New Mass expect?"

Though the answer to this question may not be so pertinent now, after almost a half century later. Surely, after this much experience with the new Mass, the Church is better equipped to gauge its consequences, both intended and unintended, and determine what changes in its norms and practice are consequently needed, independent of how liturgical needs were seen at that brief and anomalous time in history.