OKAY FOLKS, THIS POPE IS DECIDEDLY ON THE SIDE OF ORTHODOXY WHILE MODELING SAINT FRANCIS POVERTY AND SIMPLICITY TO REBUILD OUR CHURCH WHICH HAS BEEN CRUMBLING! 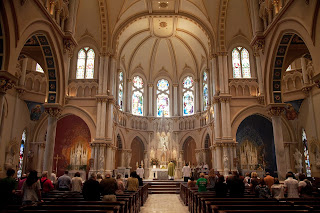 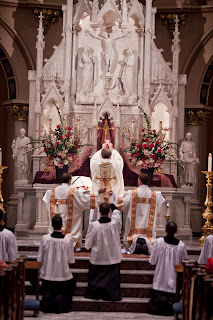 The first bit of good news as to do with the two forms of the one Roman Rite. The pope, like Mikey, for those who remember the Life Cereal famous ad from the 1970's, likes the two. We know this because of the following recent statement that should placate the ridiculous spinning of Pope Francis as some wild-eyed progressive, heterodox, post Catholic by the ultra conservatives the silly progressives:

The General Assembly of the International Una Voce Federation (FIUV) was held in Rome in the past few days - and they got an uplifting visit from Cardinal Castrillón:

The former prefect of the Congregation for the Clergy has told a traditionalist group that Pope Francis has no intention of restricting access to the Extraordinary Form of the Latin liturgy.
“I met Pope Francis very recently and he told me that he has no problem with the old rite, and neither does he have any problem with lay groups and associations like yours that promote it,” Cardinal Dario Castrillon Hoyos told members of Una Voce International (FIUV), who were in Rome for a general assembly.
Responding to questions from FIUV members about tensions within the Friars of the Immaculate, the Colombian cardinal said that the Pope moved to insist on the use of the Novus Ordo in that religious community only because of internal dissension, and not because of any negative judgment on the traditional liturgy.
At its general assembly, FIUV elected a new president: James Bogle, a lawyer, author, and chairman of the Catholic Union of Great Britain. “We are very grateful to His Eminence Cardinal Castrillon Hoyos, His Eminence Cardinal Brandmüller, and to Archbishop Pozzo for taking part in our General Assembly of the International Federation Una Voce,” Bogle said in a brief statement to CWN. “We are very pleased with the way the celebration of the traditional Mass is now going worldwide. We are obviously very grateful to Benedict XVI and also our present Pope Francis for all the support that they have given us in our right to worship in the traditional Roman rite.”


So there, those who are so silly to think that Pope Francis can't be read through Pope Benedict. Nothing to worry about.

And the Holy Father, the Bishop of Rome, the Supreme Pontiff still is calling Catholics to authentic Catholic identity based upon the Deposit of Faith and to be counted with Jesus, not the Devil at our personal judgement. This was his homily at the chapel of his place of residence at the Vatican Motel 6 this morning, twice in one week where again he teaches us about the seductions of the devil:

(Vatican Radio) Pope Francis reflects on the loving nature of God’s hands, saying even when scolding us, these hands never give a slap but instead a caress. This was the focus of his homily at the Tuesday morning mass at the Santa Marta Guest House.

Listen to this report by Susy Hodges:

In his homily Pope Francis reflected on the reading from the Book of Wisdom that recalls how we are created from the soil by God’s hands, “those hands which have never abandoned us.” “God created man to be incorruptible,” said the Pope but the devil entered the world and those who belong to him know all about it.

He went on: “We all have to undergo death but it’s one thing to undergo this experience when belonging to the devil and it’s another to undergo this experience when in the hands of God.” “Our God, like a Father with his child, teaches us to walk, teaches us to walk along the path of life and salvation. It’s God’s hands who caress us in our moments of pain and who comforts us.” God’s hands, the Pope continued, “are hands that are wounded from love” and who heal us. “I could never imagine those hands giving us a slap, Never. Never.” “Even when he scolds us, he does it with a caress.”

The Pope ended his homily by urging those present to reflect on “God’s hands who created us like a craftsman.” They are wounded hands and they accompany us throughout life. Let us, he said, “entrust ourselves into God’s hands like a child put its hand into the hand of its father. It’s a safe hand.”

And of course of Monday at the same Vatican Motel 6 chapel at his place of residence, the Holy Father said the following:

(Vatican Radio) Those who don’t truly repent and only pretend to be Christian are damaging the Church. These were the words of Pope Francis at Mass on Monday morning in the Vatican’s Santa Marta, Motel 6:

Pope Francis focused his homily on the Lord’s exhortation to forgive our brothers and sisters who have sinned. Jesus, he said, never tired of forgiving, and neither should we. As the Gospel says, if our brother wrongs us seven times in one day, and repents every time, we should forgive him.

However, Pope Francis warned, there is difference between being a sinner and being corrupt. Those who sin and repent, who ask for forgiveness, are humble before the Lord. But those who continue to sin, while pretending to be Christian, lead a double life, they are corrupt. A Christian who is a benefactor, Pope Francis said, who gives to the Church with one hand, but steals with the other hand from the country, from the poor, is unjust. And Jesus says: “It would be better for him if a millstone were put around his neck and he be thrown into the sea”. This is because, the Pope explained, that person is deceitful, and “where there is deceit, the Spirit of God cannot be”.

“We should all call ourselves sinners”, Pope Francis said, but those who are corrupt do not understand humility. Jesus called them whitewashed tombs: they appear beautiful, from the outside, but inside they are full of dead bones and putrefaction. And a Christian who boasts about being Christian, but does not lead a Christian life, is corrupt.