MY COMMON CHALICE PHOBIA JUST GOT WORSE, MUCH WORSE, READ ON:

The school is telling students to wash their hands, cover their coughs and not to share items such as drinking glasses and eating utensils. 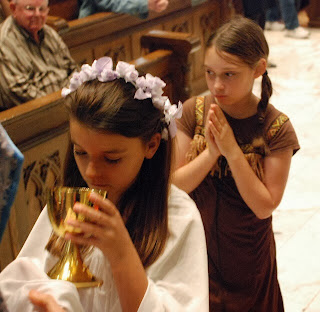 One of the reasons, amongst many, that I am phobic about the common chalice is that there is just way too much evidence convincing me that one can get H1N1 flues, other viruses and bacteria from drinking after another person, let alone upwards to 30! This nonsense about turning the chalice, wiping it with a purificator and the alcohol content of the wine as a complete assurance that one won't get a disease or pick up a virus or bacteria is just that, NONSENSE! With the hoards of extraordinary ministers of Holy Communion, just how many actually do the turning of the chalice and wiping of the rim with a new spot on the purificator each time, just how many???

And then, what about the poor souls who drink after 15 or 20 people, where saliva and bacteria are now actually in the consecrated Wine and may in fact compose more of what is consumed than the Precious Blood? The backwash issue is very real indeed. I've distributed the chalice to a variety of people, and those who clearly allow a great deal of wine and saliva to return to the chalice are children, the carriers of the most diseases known to mankind.

When I was in Augusta, a poor freshman from another parish got the meningitis type described in this news story below after drinking from a can of Pepsi she shared with her boy friend. She died within three days!

PRINCETON, N.J. –  Federal health officials have agreed to import a meningitis vaccine approved in Europe and Australia but not the U.S. as officials at Princeton University consider measures to stop the spread of the disease on the Ivy League campus.
The Food and Drug Administration this week approved importing Bexsero for possible use on Princeton's campus, said Barbara Reynolds, a spokeswoman for the Centers for Disease Control and Prevention. Princeton officials confirmed the school's seventh case of meningitis in 2013 this week and a spokesman said trustees will discuss the issue this weekend.
No vaccine for use against the type B meningococcal bacteria which caused the cases at Princeton is available in the U.S., Reynolds said, adding that the decision to receive the vaccine would be optional if Princeton and CDC officials agree to offer it to students.
Bacterial meningitis can cause swelling of the membranes covering the brain and spinal cord. The disease is fairly rare in the United States. Those who get it develop symptoms quickly and can die in a couple of days. Survivors can suffer mental disabilities, hearing loss and paralysis.
The bacteria are spread by coughing, sneezing and kissing, and most cases occur in previously healthy children and young adults. The disease can easily spread in crowded conditions, like dorm rooms. All students living in dorms are required by state law to have a licensed meningitis vaccine, but it does not protect against type B.
The school is telling students to wash their hands, cover their coughs and not to share items such as drinking glasses and eating utensils.
Posted by Fr. Allan J. McDonald at Saturday, November 16, 2013

At the (hippie) greeting of peace, some people actually TOUCH each other....why I've even seen them (gasp) KISSING...right in CHURCH.

I remember when Catholics feared God not germs. You know that thing called Reverence for Christ in the Eucharist? Seriously, if you are afraid of germs you need to confess more.

This reads like an Eye of the Tiber spoof. More proof that Catholics are out of grace and we have no idea what we receive. Bishop Sheen said, "if we truly knew what we were receiving we crawl on our hands and knees to the altar rail."

Katherine, The cup is not necessary. Receiving in one kind is complete Communion. So, I guess if someone gets meningitis, pneumonia, or herpes it is because they did not Confess enough. So, when your kids are sick, do you take them to a doctor or do you take them to Confession? You sound like a Christian Scientist...

Even if you discount drinking from the cup itself, everyone who receives this way has to physically take the chalice into their hands,
So this handling can also be a transmission vector for any virus or bacteria.
I saw a demonstration one time where a chemical was sprayed on a persons hands which would reveal any bacteria that was on them. You would be surprised what still remained even after a person had washed with soap and water.

When I worked in surgery years ago, we would put culture dishes in the doggone autoclave and grow stuff! You cannot eliminate bugs completely, but you can reduce 1. dosage, 2. time of exposure, and 3. toxicity. The cup exposes you in all three ways, but especially 1 and 3.

If we are skeered of germs from other peoples' hands, we will eliminate doorknobs, door handles, and door push plates. I think they should go before the common cup.

R u in the habiit of licking these things?

False! You must then bring your hands to your mouth, nose or eyes. If you don't no problem.

Paper money can contain more germs than a household toilet. A report in "Southern Medical Journal" found pathogens, including staphylococcus on 94% of dollar bills. Fr Mc, do the people counting your collection wear latex gloves? Do you? All the time?

No danger if you don't lick your money or your hands after handling money. Wash hands frequently and carry sanitizer but never, ever lick your hand or doorknobs !

Carry sanitizer? Really? You sound like a pretty strong case of OCD. There are counselors. Do you eat peanuts and potato chips and hot dogs with a fork?

No don't carry that or do any of those things , but would suggest that you stop licking door mobs, money, rims of used cups, glasses and and chalices and stop licking your fingers and hsnds, these are common sense precautions I urge you as a brother in Christ to do!

You were the one who started this whole germ thing. I'm fine. I never said anything about licking stuff. You did. Adios...

The problem is that people cough into their hands and also touch their mouth
and nose. I have seen people refuse to shake hands in Church while letting people know that they have a cold. That's charitable consideration. It has been shown in healthcare facilities that when clinicians wash their hands between patients it can have a substantial effect on bacteria and virus transmission rates.

The prescription here is common sense. You are nor obligated to attend Mass if you are sick If you choose to attend, you are not obligated to receive. I have read about some saints who did not receive when sick because (in the case of tuberculosis) they were coughing up blood and would not be able to consume the eucharist.

What about silver chalices?

Of all the metals with antimicrobial properties, silver has the most effective antibacterial action and the least toxicity to animal cells (Guggenbichler et al., 1999
Some hospitals filter hot water through copper-silver filters to defeat MRSA and legionella infections.

Some studies on silver have come up with inconclusive results. It couldn't hurt to use a silver chalice though -at least during flu season.