GATHER US IN OR SHALL WE GATHER AT THE RIVER? 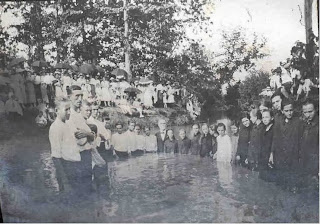 Msgr. James Moroney made a distinction in theology that I've always known, at least for the last few years, that God is the initiator of our salvation and presence before him.

Thus he used two examples of hymns that are familiar to many of us to make his point.

The first is "Shall We Gather At the River" which is a very popular Protestant hymn. Like much in Protestantism, the burden falls upon the sinner, to come to Jesus, to gather at the river, to accept Jesus Christ as one's Lord and Savior and so on.

"Shall we Gather at the River" is the epitome of this initiative the sinner must take to come to God or to Christ.

But compare that Protestant hymn with "Gather Us In." Now just a disclosure before anyone freaks out, I do not like this hymn anymore, but in my previous parish it was in our hymnbook and it was sung frequently as the Processional hymn, what some call "The Gathering Hymn" which really dates the person who uses it, but I digress.

"Gather Us In" is very singable and congregations do sing it well. But the point that Msgr. Moroney was making is that the presupposition of this hymn is that it is God who is gathering us in. He is the one beckoning us to come by His grace. It is his initiative not ours precisely because it is His desire planted in our hearts by faith received by grace.

The same is true of salvation. Protestants, at least those of the Calvinist genre always like to say "I have accepted Jesus Christ as my Lord and Savior." They love to ask others if they have done likewise.

Catholics are perplexed by the question and aren't sure how to answer. That is good. My answer is that Jesus has accepted me as His adopted son through Holy Baptism and made me a member of the Church He founded--He has gathered me into the Church of savlation!

FR, True Calvinists (Presbyterians) do not run around asking people when they were saved. That is more of a Baptist/Methodist/"evangelical church" thing, and it is ridiculous. To quote Karl Barth, the premiere protestant theologian of our age, when he was asked during a public seminar, "Dr. Barth, when were you saved?" Barth responded, "At Calvary."
Besides, given the Calvinistic doctrines of Total Depravity and Irresistable Grace, without Christ's initiative we wouldn't even have the will to drive to the Church. PS I hate the song, "Gather Us."

Our current pastor seems to love "Gather Us In" which I just won't sing. My dislike for this song has more to do with the music itself (the style or genre). What makes it especially worse in my parish is that our organist (who's really more of a pianist, having converted from Southern Baptist) plays the accompaniment for this song in an "oom pah pah oom pah pah" style--it makes me feel like it's carnival time and we are about to be treated to a clown Mass!

When it comes to "Gather Us In" and other "Glory and Praise" style music I think of the quote that Pope Francis may or may not have said when he was offered the ermine-trimmed mozetta: "The carnival is over." I'm ready for the carnival of 70's-90's style music and liturgy to be over!

Is it not the presupposition of "Shall We Gather at the River" that it is God who is doing, empowering, bringing about the gathering?

Ignotus, It would be the proper presupposition, but it is not clear from either the song or much of prot theology...

Pin/Gene - So, when we sing, "Down in adoration falling, lo the Sacred Host we hail" are we to presuppose that the initiative to adore and to hail is ours, not God's? The hymn text itself is as unclear as Shall We Gather and Gather Us In.

Ignotus, as a former Calvinist, you will never find me presupposing that ANYTHING is man's initiative. Your point is well-taken, however.