THE HOLY FATHER, CALLING HIMSELF A PHARMACIST NOW, DISTRIBUTES BOXES OF MEDICINE TO ALL IN SAINT PETER'S SQUARE AFTER HIS ANGELUS ADDRESS!

This is the photo I took with my iPhone this morning as the pope gives his Angelus address. His window is the top floor, far right building, second window from the left. You can see his banner waving: 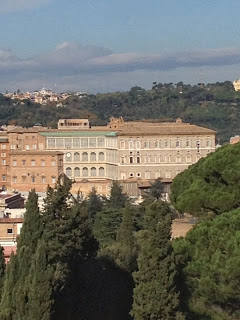 THE HEADLINES READ: POPE IS A DRUG DEALER!

Not really, but as you know, I can see the pope giving his Angelus Address from my balcony at my place of residence. This morning, bright and sunny as it was, I placed all the religious items I recently purchased as gifts on the balcony in view of the pope so that they might be blessed by him and they were. I detected a noticeable difference after the blessing!

I can't hear what the Holy Father is saying, so I was live-streaming it from Vatican Radio on my iPad! Then he held up a box and said it was a box of medicine. And then he jokingly said, that all of you must think that I am a pharmacist now. But no, I'm not a pharmacist, but be sure to take this box of medicine home and use it everyday. It was a box of rosaries packaged as medicine and evidently there were enough for all there and the square was packed!

I almost felt sorry for myself that since I have a view of the pope from my balcony overlooking St. Peter's that I was too lazy to actually go and get the blessing and the medicine! How sad is that?

This is what our very orthodox pope had to say this morning as reported by Vatican Radio. Now, I would say he is calling out those in government, such as our president, as well as celebrities, who are promoting lifestyles that are contrary to the Gospel, what Archbishop Vigano describes as "Anti-Gospel, anti-Church and anti-Christ."

One doesn't have to read too much between the lines to decipher what the pope is saying, much in the same way that Jesus' taught but one had to understand the meaning of what he said especially in his parables.

He is of course speaking about the culture of death, the contraceptive mentality, the perversion of sex and marriage and the like! He is speaking about hatred, violence and war. But he says it in a way that disarms the false prophets, the false saviors in government and entertainment and news!

Pope Francis at Angelus: Don’t be tricked by false saviours who try to substitute Jesus: Pray for the many persecuted Christians.

(Vatican Radio) At his Angelus address Pope Francis warned the faithful not to be taken in by false saviours or leaders in our world who seek to influence the minds of people, especially the young. He also urged solidarity with the many Christians undergoing persecution throughout the world, praising their courage and testimony.

The Pope’s Angelus reflections were taken from this Sunday’s gospel reading where Jesus warns his disciples of the future trials and tribulations they will face along with the false prophets they will encounter en route. The Pope said the two main messages contained here are: “Firstly, do not be taken in by false messiahs and don’t be paralysed by fear . Secondly, live this time of waiting as a time of witness and perseverance.”

He told the faithful that this message from Jesus is just as valid in our present time and encourages us to show "discernment. " “Nowadays,” he continued, “there are many false saviours who try to substitute Jesus, leaders in this world, fake saints and personalities who wish to influence the hearts and minds of people, especially the young.” But Jesus warns us, said the Pope: “Don’t follow them.” At the same time, Jesus also helps us not to be afraid when faced with "wars, revolutions and natural disasters."

Quoting from Christ’s warning to his disciples about “the painful trials and persecutions” facing Christians , the Pope said these trials are an opportunity for witness and stressed they should not cause us to move away from the Lord. Let us spare a thought, he continued, for "our many Christian brothers and sisters who suffer persecution because of their faith. There are so many of them. Maybe, many more than in the early centuries.” “We admire their courage and testimony.”

In his address after the Angelus prayer, Pope Francis noted that Sunday was the World Day in memory of the Victims of Road Accidents and urged drivers to be prudent and respect the rules, saying this helps to protect both the driver and other road users. He concluded by holding up a small box containing 59 threaded beads of the rosary and urging those in the crowd to collect a box from the volunteers distributing it as they left St. Peter’s Square. The Pope described it as “a spiritual medicine,” saying it helps “our souls” and helps “to spread love, forgiveness and fraternity.”

And, of course, one of the favorite false saviours of even the Church…"social justice…" secular humanism/socialism masquerading as charity. This one is still hiding under the Pope's bed...

This pope is even more Marian than Pope JPII and promotes popular devotion more than any other post Vatican II Pope and is constantly calling sinners to go to confession which presumes repentance from sin. So I don't get your point.

It is the Pope's WORDS…his irresponsible statements and imprecise language. It causes a great deal of cognitive dissonance among the flock. Communion in Dixie cups and clown noses didn't help, either. As a Priest, you must support and defend the Pope and put as bright a face on things as possible. But, do not tell me you haven't been secretly concerned, given your personal devout nature and your traditional understanding of the Catholic faith...