THE PAPAL MASS CLOSING MY SABBATICAL, I MEAN, THE YEAR OF FAITH AND WHY CATHOLICS AT A PAPAL MASS CAN SING! 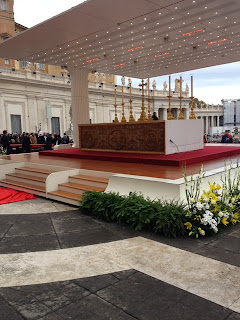 Yesterday, I concelebrated with a few other priests Pope Francis' Pontifical Mass for the closing of the Year of Faith. I must say it was moving. It was outside in front of St. Peter's and the crowd  numbers were a bit down due to the inclement weather. It was threatening rain, after having poured the entire day before and it was cold! But I would venture to say about 70,000 were there, many coming at the last minute.

I want to comment on the "full, conscious and actual participation of this Mass" and the style of it.

Let me get the first part out of the way. It was a "Solemn High Mass" as far as Pope Francis is able to do it, but of course he can't sing, so his parts are all spoken. It was indeed solemn. Incense and torches were used in all the right places. The Holy Father used the same vestment, very beautiful, that Pope Benedict used to beatify Pope John Paul II.

The Mass was all in Italian, except for the sung parts, even the canon and that was #III. The Gospel was chanted beautifully in Italian, with the Latin Greeting and conclusion and the Latin conclusion for the other readings.

Let's talk about the music and the invitation for the 70,000 to sing. First of all, everyone received a worship booklet with all of the Mass in it and what the assembly was invited to sing. That's is a huge expense as the booklets are very nice on glossy paper.

Prior to Mass we all prayed the Holy Rosary in Latin. Great. Then the Processional Hymn began which was a commission work with two different refrains in Latin, quite singable that everyone did sing. The verses were primarily in Italian, although one was English, and it was long enough to cover the long procession (the concelebrating lowerarchy was already seated and only a selection of bishops and cardinals processed. There were many Eastern Rite bishops and clergy concelebrating in their own vestments. Their bishops were crowns, similar to the papal tiara and there were many of those!

Once the Holy Father arrived at the altar, the Sistine Choir and other choirs (and they were great) sang the official Introit or Entrance Antiphon and in Latin. However the words and notes were printed so anyone could join, although it was a complex Latin chant.

I think this combination of a congregational hymn and the official Introit is the way to go. And what was chanted was only the verse that is in the Roman Missal and what most find in their missallettes.

The Mass of the Angels was used beginning with the Kyrie and all had parts to sing.

The Gloria was divided between the schola and assembly and the schola parts were jazzed up in  a very beautiful way, especially for the Gloria and Credo.

The Holy Father held the cask with the bone of Saint Peter in it as the Credo was chanted. I think this was a first in the history of the Church, St. Peter and his Successor as one! That was a profound moment!

Although the pope spoke the introduction, the Pater Noster was chanted in Latin with an Italian doxology after the Embolism.

Both the Offertory and Communion chants were the official ones and in Latin and beautifully sung by the combined choirs with words and notes for the assembly.

Additional Communion motets were sung. Ave, Verum Corpus and then Adoro Te Devote, with verses for the Assembly to chant as well and words and notes provided.

There were two moments of extended silence for contemplation after the homily and again after Holy Communion.

All and all, the reason why Catholics can't or won't sing is because modern idioms of music today are hard to sing and no tradition of singing the same thing regularly, like over centuries is provided for most parishes.

Not so at this Vatican Papal Mass. There was nothing new, all that was sung came from centuries of music all Catholics should know! And what was easy enough for congregational singing was chosen from that centuries old tradition!

The only new piece was the initial processional hymn, but this hymn had been sung at every papal Mass for the past year! And the refrains were accessible for the assembly to sing.

Finally, the concelebrants were not chosen to distribute Holy Communion until the time of the Offertory when ciborium were passed to us. My row was the last to have these passed down and I kept getting one that I kept passing down the row but then sadly, they ran out just when it was about my turn to keep it for me to hold to consecrate during the Eucharist Prayer.

Finally, the Vatican Youtube presentation of this Mass can be seen by PRESSING HERE. If you go to  hour 2, minute 4, and seconds 50, you will see a priestly surge toward the Holy Father as he approached and gets onto the popemobile to tour the piazza. I was literally carried forward and almost got to the very back of the popemobile within a foot or two of being able to touch the Holy Father. There was nothing the security, in a panic, could do. It was amazing and the music you here is actually what we were hearing from the live orchestra of the Mass which continued to play after the Mass. It is like being in a movie and watching it looks like a Hollywood movie!

Why do you think Pope Francis is insisting on using Italian for all his parts versus Latin, especially for a Solemnity such as this? I can understand doing so for primarily Italian congregations, but this seems a little insensitive to those who may recognize Latin as being the Universal language of the Church. It will be very interesting to see what happens at Christmas. Also, I noticed the Angelus was inserted in the Order of Mass prior to the dismissal and I'm sure at the explicit direction of Pope Francis. Can you comment?

The Angelus after a large papal Mass is a tradition and Pope Benedict also did this and I presume JPII. That the canon was not in Latin is a mystery especially with 250 con celebrating priests from around the world. Francis has celebrated in Latin so I don 't have any answer about Sundaysass.

It does seem extremely rude to the non-Italian-speaking pilgrims.