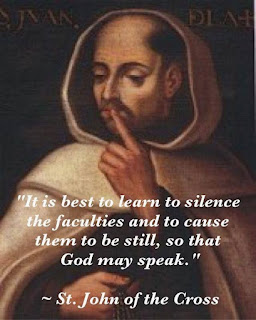 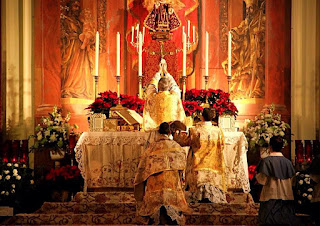 This past Wednesday at Pope Francis' audience where His Holiness is having a series of classes on the Mass, Pope Francis suggested adding contrived silence to the Mass in all the places that I was taught to do so in my seminary education in the 1970's. It is laudable, but misses the mark as far as this most humble priest is concerned.

By the mid 1970's many progressive liturgists began to hear the complaints of those who remembered quite well the ancient form of the Mass recently suppressed for the majority of the Church throughout the world, that the new and "improved" Mass has too much talk, is too verbal and too sing songy.

So it was recommended by these liturgists at national workshops that parishes add some silence to the Mass. But where and how long?

Initially it was long periods of silence after the "Let Us Pray" of the Collect; after the first reading, after the Psalm, after the second reading and then after the homily, and after Holy Communion. It was a contrived silence and usually people were sitting rather than kneeling in prayer.

And it was long--sometimes one minute to two minutes to three. It was boring and the laity and the priests began to become unpleasantly annoyed by it. So the length of time was shortened to about as  long as it takes to say an Hail Mary for the readings and an Our Father for after the homily and Holy Communion.

Of course there was no consistency from parish to parish. Some had silence others didn't. Some had long silences and others had short.

IT WAS ALL CONTRIVED SILENCE AND WHILE PEOPLE WERE SITTING AND MOST LAITY THOUGHT SOMEONE HAD FORGOTTEN TO MOVE ON WITH THE NEXT PART OF THE MASS!

This happens at major Masses at St. Peter's either outside or inside begun by Pope Benedict and continued by Pope Francis.  I experienced the outside several times over the last four years. And yes, after the homily and after Holy Communion,  commentators for several languages comes on and says we are going to have some silence so that the congregation won't think someone is sick or has forgotten to do something. And yes, it is long and it is too long and it is much too long and we all were getting antsy!

But with the recently suppressed Ancient Mass, silence was built into actual liturgical prayer and thus was seen as integral rather than contrived. While there were other points of silence, the Grand Silence was the praying of the Roman Canon--with all of its quiet sign language only interrupted by the bells (suppressed by many in the new and "improved" Mass) and the occasional raising of the priestly voice during the Canon.

And everyone in the congregation was kneeling for this Grand Silence and it was awesome. A sense of entering into the sacred of the sacred was occurring and it produced reverence and fear of the Lord.

Today's silence in the new and "improved" Mass is contrived and boring and there is no sense of awe but rather annoyance or wondering when will this ever end!
Posted by Fr. Allan J. McDonald at Thursday, January 11, 2018

"And everyone in the congregation was kneeling for this Grand Silence..." What Grand Silence was/is there in a solemn or sung EF Mass when the choir would be singing the Sanctus during the Canon, and in many cases continue with the Benedictus in elegant art-music right after the consecration? The Grand Silence you speak about was for the Low Mass, and by "low" is meant of lesser solemnity.

The singing of Sanctus/Benediction by the choir during the Canon does NOT interrupt the silent prayer of those who choose to unite themselves prayerfully with the priest. So perhaps there is a sense in which liturgical silence does not require absence of any sound. Only that it (like beautiful chant) can provide an encouraging background to silent prayer, instead of interrupting it (as does incessant Novus Ordo chatter).

On the other hand, contrived Novus Ordo silence does effectively preclude silent prayer, because no one knows how long it will last, and hence what kind of prayer to start. So no one prays, just sits there wondering when it will end.

Henry:
The NO can also have this liturgical silence you speak of for the EF, by providing an encouraging background of song for prayer such as during the Offertory and Communion, even by guitar praise and worship bands.
There also seems to be a fine line here between Muzak in supermarkets which is meant to give a homely feeling to what is essentially a warehouse setting, and having beautiful music provide an encouraging background to silent prayer.

Who has suppressed the 'Ancient Mass' recently? It's news to me.

The first (sadly anonymous) comment - and perhaps it would be a good New Year's resolution to refuse to post anonymous comments - makes an obvious point. In the Solemn Mass there are relatively few moments of complete silence, although these moments are of 'filled' silence rather than artificially contrived interruptions in the liturgical action. Indeed, there are times when the liturgical action is halted for the music; the Requiem Mass has a long Gradual, Tract and Sequence, for most of which the ministers sit.

However, unlike the relentlessly linear Novus Ordo, the traditional Mass is layered. The choir sings the Introit and Kyrie while the celebrant and ministers say the preparatory prayers. They are inaudible to the congregation, and so are in effect 'silent'. The same applies to the Canon; it is indeed 'silent', despite the fact that much of it is overlaid by singing. So, paradoxically, the singing reinforces the silence. There is more to silence than the mere absence of audible sound.

Mr. Nolan:
Unintentionally, I am the culprit of the first Anonymous. After 83 tries to get through the Captcha thingy on another SO post, I was still carelessly distracted on this one.

Certainly, there can be plenty of silence in the priest's and faithful's voice in the EF Mass, but is not one equivocating on the meaning of silence when one says that singing reinforces the silence? If there is singing, there is no longer silence in the church. How would you define this liturgical silence where there still are sounds in the church? At least the NO tries to keep to the normal understanding of the word, the absence of acoustic sound, despite it being contrived.

The majority of Sung EF Masses that I celebrate the Sanctus/Benedictus is chanted as a whole. By the time I say it myself, and then begin the Roman Canon, the schola is finished with the sanctus prior to the consecration, in fact before it and usually before the epiclesis. Thus there is a great deal of silence, actual silence, not covered by chanting in the sung Mass I celebrate.

Victor, I am not sure why you can't easily post. My comments post automatically, what I see is a simple check mark by the captcha that the poster is simply checks to prove he's not a robot.

As for Google Captcha, it could be the higher level of Internet security I use on my machines, or the browser I use, Pale Moon, which is a fork of Firefox. Google Chrome works transparently with it, and Firefox is fairly smooth from what I am told. But I have issues from a politically incorrect (i.e. Catholic) perspective with those. In any case, it takes little effort for criminals to by-pass Captcha.

(After countless tries, I was even getting "Cannot connect to reCaptcha...", it is becoming increasingly difficult to comment on your blog, but I am still determined. )

I wonder how much the Church (Eastern and Western) traditionally valued silence in divine services. Many litanies developed in the Divine Liturgies of the East in order to provide the celebrant enough time to complete his inaudible prayers without leaving the church in silence. And despite the permission for redacted liturgical services in the form of the "low Mass," the Western Church historically continued to promote the Solemn Mass (in which music often dominates the celebrant's silence mandated by the rubrics) as the ideal liturgical form. I think that the promotion of silence in the Ordinary Form (contrived or otherwise) is similar to the promotion of the conventional four hymns in the Ordinary Form. This makes sense given that the Novus Ordo is based on the dialogue low Mass format instead of the solemn Mass, in which both silence and vernacular hymns were absent.

While there is a tradition of silent prayers (at first contested, but later accepted) in divine services, the idea of silence for the laity does not appear to be part of the Church's ideal liturgical practice.

"The majority of Sung EF Masses that I celebrate the Sanctus/Benedictus is chanted as a whole."

I would characterize as "liturgical silent" any period within the Mass when those in the congregation can "pray the Mass" silently--a la Pius X, unite themselves with the inaudible prayer of the priest. It's irrelevant whether there is absence of audible sound, but important that it be built into the liturgical action of the Mass, rather than an interruption to it--like the contrived Novus Ordo silences, which do not lend themselves to silent prayer, because there is no concurrent liturgical action with which to unite oneself in silent prayer.

I agree. But to what extent is the Mass celebrated for the benefit of the congregation? I chant for the traditional Mass three Sundays out of four. On, say, Pentecost Sunday we will sing Vidi Aquam, Introit, Kyrie, Gloria, 1st Alleluia, 2nd Alleluia, Sequence, Offertory (with added verses), Sanctus/Benedictus, Agnus Dei, and Communio (again with added verses). It's hard work and one hopes the congregation appreciates it; but translated to the monastic setting which nurtured it in the first millennium there was no conception that it should appeal to the laity, or that lay people would participate in it.

Indeed, most laymen probably are not following literally the words of the schola as they chant the ordinary and propers in adoration and worship of God--as you indicate, these chants are not directed at the congregation. Instead, most of those present likely are following silently in their hand missals the prayers of the priest at the altar.

I agree with Adam and Henry. The litanies of the East and the ordinary/propers of the West seem born of the need to provide the priest celebrant with adequate time to recite the required inaudible prayers. Perhaps one could argue that lacking dialogue, this is a form of contemplative silence.

As for the Novus Ordo, periods of "sacred silence" can seem forced and choppy given the stoppage that occurs. Additionally, if unduly prolonged by the celebrant, it becomes awkward and perhaps counterproductive for the faithful wondering how long it will last.

Like the development of clerical vestments, liturgical features such as multiple litanies and the form of the Latin Solemn Mass developed from practical concerns but later assumed a broader, devotional significance.