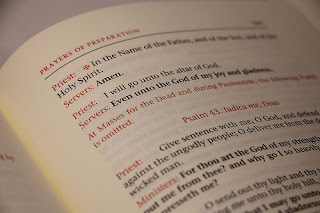 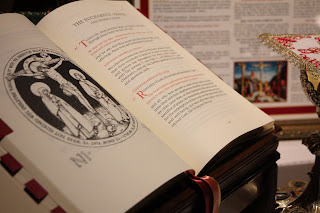 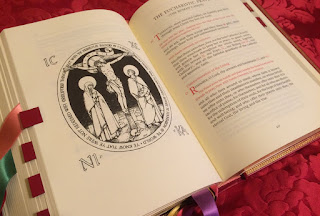 2. The Extraordinary Form of the Mass will be celebrated in more places but it will continue as a "boutique" Mass not having universal appeal any longer but for a more "selective" sort of congregation--in other words it won't be the dragnet of laity attending as in the Ordinary Form but a more exclusive connoisseur of mysticism, tradition and security.

a. That our most recent Roman Missal remain the same, but with tweaked improvements in the priestly prayers to allow for better English syntax, sentence construction, beauty and punctuation without sacrificing the spirituality and devotional elements of the Latin Roman Missal

b. That the revised Roman Missal will look like the Divine Worship, the Missal in layout as indicated in the header photo

c. That the Prayers at the Foot of the Altar, the High Middle Ages Offertory Prayers, Kneeling to receive Holy Communion and the Last Gospel as well has rubrics for the Eucharistic Prayers be modified and more in continuity with the EF's clear rubrics as is already the case in Pope Francis' approval of the Divine Worship, the Missal

d. That the propers of the Mass never be eliminated even if hymns are sung in addition to these as is done at the Vatican
Posted by Fr. Allan J. McDonald at Monday, January 01, 2018

Don’t expect the “irreversible deformations” in the OF to be reversed during the current papacy. Meanwhile, it is what it is. In most parishes, probably about midway between a clown Mass and an oratory Mass, both of which most of us see only on the internet.

For instance, the Mass I attended this morning. Presented with a choice between an EF low Mass at 8 am and a vernacular OF “high” Mass (one with chant and incense) at 9 am, I chose the latter. Partly because of the time required to recite Matins (9 psalms and 9 readings) and Lauds, Prime and Terce aforehand.

Less than 50 people were present on a frigid morning without the usual obligation (our bishops having fatuously lifted it), so it seemed like a “boutique Mass”, compared with yesterday’s EF Mass with a substantial congregation.

Mercifully with no congregational hymns, priest and people chanted the entrance antiphon in English during the opening procession, the priest in a gorgeous satin chasuble with traditional orphrey and blue lining, over an alb with lots of lace, preceded by server in surplice and cassock.

Then the Confiteor form of the penitential rite, the Kyrie and Gloria (and later the Sanctus and Agnus Dei) chanted in the English Roman Missal 3/e chant tones, essentially all the people joining in. Of course, the priest alone chanted the collects, Preface, and all the dialogue parts (the people responding heartily to the latter). It’s striking that the orations—which in the new English translation can sound a bit clunky when merely recited by an inadequately prepared priest—sound smooth and readily followed when chanted properly.

The Mass was celebrated ad orientem with bells and smells by a priest who uses only the Roman Canon on feasts and solemnities (EP III on memorials and ferias, never the Protestant-friendly EP II). Curiously, the people responded with a hearty Amen to each of the half-dozen Through Christ Our Lords dispersed throughout the Roman Canon. For some reason, the canon sounds more like it’s directed to God when he’s celebrating ad orientem, while the same priest sounds instead like he’s speaking to the people when he’s facing them.

In summary, about par for the course for a middle-of-the-road OF parish Mass? That is, one celebrated by priest who’s TLM-savvy, and hence knows what the Mass is, and what he as a priest is.

In a fit of ecumenical fervor, Pope Francis will marry the female Episcopal Bishop, ushering in a New Age of free love, gay marriage, adultery, and fornication. The new Church will be called the Cathlicopal Church and there will be 69 Articles in the new Statement of Faith.

Biblical scholars, products of the best liberal seminaries and grad schools, will discover that Jesus was gay, Paul a hermaphrodite, and the disciples were a transgender cabal.

Elizabeth Warren will claim that she is Mary Magdalene and prove it by offering herself to Joe Biden (if she has not already done so).

Fr. McD predicted, "1. The Ordinary Form of the Mass will continue as such but more and more places will attempt to celebrate this form of the Mass with more dignity, solemnity and tradition."

Hey, maybe you're right Father! I attended Mass this morning at a parish I stopped going to because the priest who does the English Masses (Novo Ordo) ad libbed at almost every Mass. I went there this a.m. because of my schedule today. And the "offending" priest said the Mass, but he only said "Happy New Year" twice: once at the end of his homily, and once at the end of Mass after the final blessing! I consider it a milestone! He also spoke the prayers as written and followed the rubrics for every other part of the Mass, including the opening prayer! No ad libbing! WOW!

And his homily was thoughtful, reflecting on the true role of Mary in the Church. I found it quite profound.

So maybe, Father McD, just maybe, your prediction #1 will come true! I hope and pray so!

Bee, maybe now we know now the answer to two mysteries: why the priest has become more orthodox and why the servers lift the Chaucible. It is to give the bishop a clearer shot with his boot.

My prediction and to partly state the obvious: With each passing day, the younger generation notches incrementally forward to positions of leadership while the older generation notches incrementally toward the passing on of their respective mantles. Will this be completed this year? Of course not, but, time will ensure that it continues. Hopefully, with this passing and as suggested by Fr. AJM, sobriety, solemnity, dignity and tradition will continue to become part of divine worship in the west.

And, TJM, let us hope that among other things, 2018 brings a refocus away from papal apologetics on this blog. Christ is among us - the Office and its occupant, fixed at his location, is not.

Chants and ad Orientem help to defuse the acting-out. The OF will never replace the EF. The OF is more popular today due to the loss of understanding of the Mass as a sacrifice. To most Catholics today the difference between Lutheran or Episcopal services and a Catholic Mass is about the same as what they might experience between two OF Catholic Masses in two different Catholic parishes. Sad.

The rate of improvement in the average celebration of the Novus Ordo will proceed at the same rate as the growth in the number of Old Rite Masses - it will be perceptible but slow, and will depend mostly on generational factors. The worst examples of liturgical 'creativity' I came across were from priests who had been trained to say the old Mass.

There are improvements which can be made at parish level. One of these would be the restoration of the sung Mass as the principal Mass on Sundays and Solemnities. This was one of the first casualties of the rush to vernacularize the liturgy in the 1960s. And yet there is plenty of evidence that the fabricators of the Novus Ordo envisaged it as a sung Mass - Bugnini's Consilium observed that the singing of hymns at Low Mass no longer applied.

For forty years I never heard a sung Novus Ordo that wasn't in Latin. Fair enough, I neither want nor need the vernacular, but I would suggest that most people do; and the new translation came with a completely chanted version. Singing the Mass restores the objective nature of the celebration; in the Eastern rites there is no such thing as a 'said' Mass. It makes little difference whether it is celebrated ad apsidem or versus populum.

Unfortunately, we come to the elephant in the room, namely the visceral hatred of the Latin language held by many otherwise educated Catholics, particularly in the USA. At first I was inclined to put this down to a feeling of inferiority (they were never taught it at school), but since the Devil's hatred of Latin is well known to exorcists, there might be an alternative explanation. However, the familiarity of the vernacular now makes it easier than it was in the past for congregations to sing (say) a plainchant Gloria or Credo in Latin with complete comprehension.

I cannot imagine a rabbi who despised Hebrew or an imam who denigrated Arabic. Yet there are Catholic priests (one of them posts here) who would not use the sacred language of their own Church on principle, and who would dismiss it as 'unnecessary'.

I don't hate Latin, viscerally or otherwise, and I don't know anyone who does.

I don't feel inferior to those who have studied or become proficient in Latin - or French or German or Urdu. I may be a little envious, but in the same way that I am envious of a person who, like Diana Damrau, can sing the Queen of the Night aria with such ability and, dare I say it, splendor, that it sends chills down my spine!

So, you can argue that those who disagree with your preferences are 1) diabolical or 2) swamped in their own "inferiority" till the cows come home. If your ability makes you feel superior, then revel in it. But remember, "If you compare yourself with others,you may become vain and bitter; for always there will be greater and lesser persons than yourself."

Remember as well the wisdom that seems to have originated with John Lydgate, "Comparisons are odious."

What amazes me is that you actually believe that your arguments that dare someone to prove their points with evidence lead to truth. Prove this, prove that, evidence based, instead of wisdom based. It makes me laugh. You're like a doctor who has a patient rushed into an ER with blood gushing out of his belly, and he says, well, we'll have to run some tests to see if this guy is really bleeding to death. And I won't believe it or act on it until we have the results of those tests.

Equally interesting is that the anonymous priest blogger was only castigated by me for a) never celebrating in Latin and b) denigrating its importance, positions he has constantly advanced.

He also gives himself away by his curious use of totally inapt analogies. Since he is not a coloratura soprano (at least I assume as much since only an entire male can be ordained) he can hardly envy those who can sing roles written for that voice.

Not to mention his obdurate relativism. Latin is not a language made sacred by nearly two millennia of sacred use, it just happens to be the personal preference of John Nolan, Esquire, and could equally apply to Urdu.

I'm glad he's anonymous, since I would otherwise be constrained to be courteous, rather than call him out for what he is - a man of limited intellect who knows next to nothing about the history of the Roman Rite and whose lower-case 'masses' I would avoid like the plague.