I WOULD SAY FR. MARTIN FOX CRITIQUE OF FR. DONALD COZZENS IS RIGHT ON! 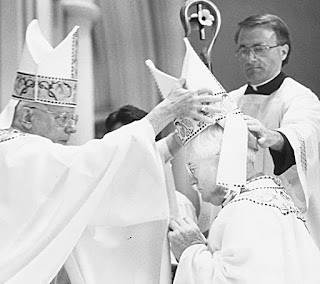 Fr. Matthew Fox makes a marvelous critique of Fr. Cozzens as a comment and question to another commenter. I make Fr. Fox's comment a generalized post:

Father Cozzens, in his woolly-headed article, calls into question whether Holy Orders imparts anything to men to make them different from when they were baptized:
"...a corps of ecclesiastical elites who think they’re unlike the rest of the faithful."
Either he believes that all the baptized can confect the Eucharist and absolve sins -- or else he denies that priests and bishops apparently doing so is an actual difference. Ordained or not-ordained -- no difference.
Because it is incoherent to think that person A -- who can confect the Eucharist and absolve sins -- is not "unlike" person B who cannot do these things.
Similarly, Father Cozzens also calls into question the actual teaching of the Church that a priest is in persona Christi capitis:
..clergy who put their status as priests and bishops above their status as baptized disciples of Jesus Christ.
In my experience -- both in biology class and in actual human interaction -- the "head" ("capitis") is usually "above" the rest of the body.
And, by the way, Christ himself is "above" the rest of the Mystical Body, and a priest is configured to Christ as head. Hence bishops exercise the teaching office of the Church -- by virtue of Holy Orders, not by virtue of baptism. Priests exercise the power of the keys in union with the bishops, again, by virtue of Holy Orders, not by virtue of baptism.
Of course, it is Father Cozzens who creates an either/or: either you are "above" (boo! bad!) or you are "approachable." In his woolly-headedness, he seems incapable of supposing that it can be both/and: Those with Holy Orders are, by virtue of that very sacrament, BOTH "above" and "unlike," AND also they imitate Christ the Head, to whom they are configured...by Holy Orders in a particular way...also to be with the faithful and serve them.
Woolly-headed Father Cozzens says that if the priest is "above" and "unlike," then he cannot be approachable and "connect on a human level." So, question for you, (who persist in defending Fr. Cozzens' "either/or" thesis):
Jesus Christ is "above" and "unlike," yes? So following Father Cozzens, Jesus Christ cannot then be "approachable" and cannot "connect on a human level." Do you agree that Jesus Christ is not "approachable" and cannot "connect on a human level"? This is Father Cozzen's either/or, (that some) persist in defending. Please apply it to Jesus, who is the priest par excellence.
Posted by Fr. Allan J. McDonald at Thursday, January 04, 2018

Oh that’s right he couldn’t make it in the real world.

I doubt Father could have survived yesterday’s blizzard. He would have had to shovel his way out to his car, then drive in dangerous conditions, with a cold, put in a hard day’s work (no nap time or trips to the barber), have to keep his opinions to himself (or loose his job), not have time to eat lunch, drive home in the same blizzard, then spend an hour shoveling the driveway and sidewalk, then have to cook his own dinner, then pay bills and finally go to bed.

How did Father, who doesn’t want to be above everybody, else spend his day.

Mass was cancelled so Father slept extra late. He was angry to have to get out of bed to turn up the heat. When he woke up he was angry because the cook called in to say she couldn’t come in because her children were home from school, therefore Father had to make his own breakfast. Then he took a lesuirley bath and was angry because the lay people who are shoveling him out are making too much noise. Then it’s time to watch The View and complain about the president. Then nap time. Then time to think about lunch, cursing the cook because there isn’t any food in the house. Then calls to his favorite classmate to discuss were they are going in Europe this summer. Then time for Netflix. Then dinner. Back to bed angry that he has to get up tomorrow and say Mass. Just a guess but something tells me I’m right.