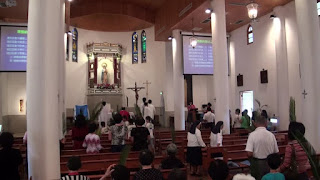 This Catholic Mass has the most possible active participation: 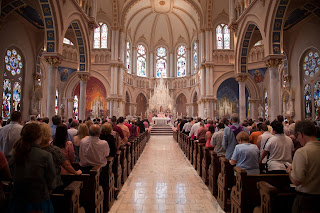 Okay, I agree that the decline in active participation in the Church after the reforms of the Mass after Vatican II are multifaceted. However, I continue to contend that the foundation of the loss of Catholic membership and thus active participation goes back to 1968 when liberal Catholics were turned off by Pope Paul's Humanae Vitae, because liberal theologians had told them that since the Mass could change, which up until then, most thought it couldn't, then anything and everything could change. When the pope said some things won't change, liberal Catholics got mad and stopped going to Mass and thus active participation at Mass declined in a serious way after Vatican II's liturgical reforms.

Orthodox or traditionalist Catholics were alienated by the changes in the Mass and being marginalized by a progressive elite in the Church, namely the clericalism of liberal priests and nuns who shoved their ideology down their throats in the ugliest way, shaming those who held to pre-Vatican II positions. It is happening again today, just read the post below this one!

For both alienated groups, the foundation was laid for their children and their children's children to be malformed or uniformed about the Catholic Faith. The on-going liberalization of the Mass through experimentation in the 1970's and 80's led to many Catholics not taking seriously the Church's liturgy.

Thus, today, we have in some places, mostly in Europe, but in the liberal northeast of the USA only about 12% of Catholics attending Mass which means that 88% of Catholics don't engage in the Mass at all! There is no active participation whatsoever by this 88% of Catholics.

Keep in mind in the pre-Vatican II Church that so many progressives complain that the laity, although they were at Mass, did not participate as the progressives authoritarianism said they MUST, there were about 95% of Catholic in attendance meaning that their very physical presence was a form of active participation, in fact its very foundation!

Praytell has prediction for 2018 touting Pope Francis who will bring back the 1998 rejected Roman Missal English translation as the panacea for better active participation, meaning the small group of Catholics who actually attend Mass each Sunday. You can read the whole list at Praytell including their interesting but censored comments following it.

But the last prediciton by Fr. Ruff is very telling and tells me that in a subconscious way or in a Freudian way he actually agrees with what I write above:

When the Mass is celebrated ad orientem, the priest does not become preoccupied in a very clerical way by what the laity in the pews behind him are doing; his focus is on the prayer, devotion and spirituality of the Church's liturgical prayer.

But once the priest began to face the congregation, he becomes preoccupied in the most clerical way with what is happening before him: people are not opening their hymnbooks to sing or aren't singing at all; someone is praying the rosary; another person is getting up to go to the bathroom; another person is reading the bulletin; another parishioner is looking at her watch; another person is texting or face-booking or tweeting on their media device; another person is watching a football game and the list goes on and on.

Then, just as it happened in the 1960's, these people are shamed by the clericalism of priests and nuns and they get mad and stop coming to Church, so much so that only 12% actually attend in 2018!

Back in the good old days, the pre-Vatican II Church kept more people in the pews by allowing for more liberalism as to what it meant to be a Catholic, good or bad Catholic, and that was the fact that there were clear minimums required:

1. Obligation to attend Mass, even if a Catholic arrived just in time for the Gospel and one departed after Holy Communion

3. Cultural Catholicism in terms of fasting and abstinence marked one as a Catholic and encouraged them to attend Mass even if their moral life left much to be desired

Thus the pre-Vatican II Church was more like a field hospital for the marginalized Catholic who was a great mortal sinner because at least he was there for a good part of the Mass each Sunday and no one shamed him for coming late or leaving early! ACTUAL PARTICIPATION MEANT YOU WERE PHYSICALLY IN THE CHURCH FOR AT LEAST A PART OF THE MASS EACH SUNDAY WHICH IN FACT IS THE FOUNDATION OF ANY OTHER TYPE OF ACTIVE OR ACTUAL PARTICIPATION THERE IS!
Posted by Fr. Allan J. McDonald at Friday, January 05, 2018

"...did not participate as the progressives authoritarianism said they should..."
Sorry, but you are wrong here, Fr McDonald. Here is the correct phrase:


"...did not participate as the progressives authoritarianism said they MUST..."

The fact that these progressives told you how you must participate, that you had to be "active" their way or no way, sine qua non, turned off 80% of Catholics in those post V2 days. That people in pre-V2 days were content to pray and become united to God each in their own individual way during Mass was and still is an abomination to progressives. So basically after a number of years and alienating everyone else you just had an elite club of extraverted people coming to church who enjoyed the built-in noise of the Novus OPrdo.

Eh? GO TO THE EYE DOCTOR, IT IS SUPERFLUOUS NOT SUPERFLOUS!LOOK AGAIN WITH YOUR GLASSES ON. :)

Victor you are right. I had heard stories too of churches being locked once the Mass began and ushers enforcing the "no leave" policy of the parish, meaning you could not leave the nave once Mass began!

Also, I saw first hand priests at the beginning of the opening hymn aka "Gathering Hymns" shove an opened hymnal to the right hymn into the hands of those who had not bothered to pick up a hymnal to sing!

That's how you spell "CLERICALISM" NO?

Victor, I have revised the offending word!

Lithrgical “progressives” slogan: We Double Down on Failure!