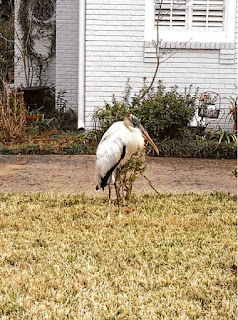 Residents of Savannah’s Ardsley Park/Chatham Crescent neighborhood have been keeping their eyes on a new arrival.

It’s not because the guy (Or it could be a woman. We’re not really sure.) has a broken-down vehicle in the yard or drum kits, guitars and amplifiers signifying the dreaded presence of a rock band.
Nope. This stranger has wings.

Neighbors first noticed a wood stork in the area on Jan.
10. The stork’s appearance so enamored the community that members took to their community Facebook page to name it General Oglestork.


“Whereas, We wish to recognize the significance of Savannah’s founder, Gen. James Edward Oglethorpe, and bestow his namesake upon our newest resident,” Nick Palumbo, Ardsley Park/Chatham Crescent Neighborhood Association president, wrote in an official proclamation.

Diana Churchill, who writes the Birder’s Eye View column for Savannah Morning News and savannahnow.com, says wood storks are fairly common in our area — just not in Ardsley Park.

“They are quite common on Skidaway Island, around Tybee,” Churchill said. “Harris Neck National Wildlife Refuge south of us has about the largest nesting colony in the area. Some nested last spring at Oatland Island Wildlife Center.”

So if you see General Oglestork the next time you’re in the area, say hi – and thank him for the squares.
Posted by Fr. Allan J. McDonald at Wednesday, January 17, 2018