AM I THE ONLY ONE WHO FINDS IT IRONIC THAT THE GREATEST CONCERN FOR CATHOLIC ORTHODOXY COMES FROM THE PERIPHERY?

UPDATE 1/5/18: Bishop Schneider tells RC that Cardinal Janis Pujats, Archbishop Metropolitan of Riga/Latvia, added his signature to the text of the "Profession of Immutable Truths.

I guess the 1970's ideologue, Fr. Donald Cozzens would call bishops, priests and deacons from the periphery of Africa and Eurasia like Kazakhstan 🇰🇿 the worst of clericalism, but I beg to differ.

This interview provided by Rorate Caeli is significant even if it was not from the periphery:

The Pope cannot be the focal point of the daily life of the faith of a Catholic faithful. The focal point must instead be Christ. Otherwise, we become victims of an insane pope-centrism or of a kind of popalatry, an attitude which is alien to the tradition of the Apostles, of the Church Fathers and of the greater tradition of the Church. The so called “ultramontanism” of the 19th and 20th centuries reached its peak in our days and created an insane pope-centrism and popolatry. To mention just an example: There had been in Rome in the end of the 19th century a famous Monsignor who led different pilgrim groups to the Papal audiences. Before he let them enter to see and hear the Pope, he said to them: “Listen carefully to the infallible words which will come out of the mouth of the Vicar of Christ”. Surely such an attitude is a pure caricature of the Petrine ministry and contrary to the doctrine of the Church. Nevertheless, even in our days, not so few Catholics, priests and bishops show substantially the same caricatural attitude towards the sacred ministry of the successor of Peter.


IMPORTANT: Bishop Athanasius Schneider interview with Rorate Caeli on "Profession of the Immutable Truths", communion for "divorced and remarried"

Bishop Athanasius Schneider -- auxiliary of Astana, Kazakhstan, and one of the original three drafters of this week's Profession of the Immutable Truths in response to Amoris Laetitia and Pope Francis' official approval granting Holy Communion to some "divorced and remarried" Catholics -- participated in an interview with Rorate Caeli after the document's release.
You can read more on the original document here. We urge all Catholic media and blogs to run this interview in full -- but please reference Rorate Caeli as the source. 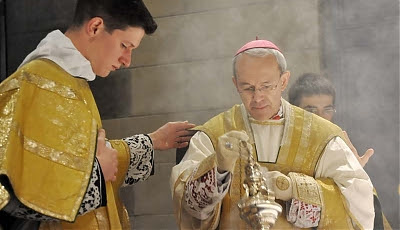 RORATE CAELI (RC): Your Excellency has personally been out in front in terms of restoration of the traditional liturgy for many years. Now Your Excellency, Archbishop Peta and Archbishop Lenga have come out publicly, and forcibly, in defense of marriage in the aftermath of Amoris Laetitia. Why did the three of you decide now was the time to respond?
BISHOP ATHANASIUS SCHNEIDER (BAS): After the publication of Amoris Laetitia, several bishops and Bishops’ Conferences started to issue “pastoral” norms regarding the so-called “divorced and remarried”. One has to say that, for a Catholic, there is no divorce because a valid sacramental bond of a ratified and consumed marriage is absolutely indissoluble and even the bond of a natural marriage is per se indissoluble as well. Furthermore, for a Catholic, there is only one valid marriage being his legitimate spouse still alive. Therefore, one cannot speak of a “re-marriage” in this case.
The expression “divorced and remarried” is consequently deceptive and misleading. Since this expression is commonly known, we use it only in quotation marks and with the previous remark “so-called”. The mentioned pastoral norms regarding the so- called “divorced and remarried” -- norms masked with a rhetoric bordering on sophism -- foresee ultimately the admittance of the “divorced and remarried” to Holy Communion without the requirement of the indispensable and Divinely established condition that they may not violate their sacred marriage bond through their habitual sexual relationship with a person who is not their legitimate spouse. A certain peak has reached in this process of implicit recognition of divorce in the life of the Church, when Pope Francis ordered to publish in the Acta Apostolicae Sedis, his letter of approval of similar norms which issued the bishops of the Pastoral Region of Buenos Aires.
This act was followed by a declaration that this papal approval would belong to the authentic Magisterium of the Church. In view of such pastoral norms which contradict Divine Revelation with its absolute disapproval of divorce and contradict also the teaching and sacramental practice of the infallible Ordinary and Universal Magisterium of the Church, we were forced by our conscience, as successors of the Apostles, to raise our voice and to reiterate the immutable doctrine and practice of the Church regarding the indissolubility of the sacramental marriage.

"The Pope cannot be the focal point of the daily life of the faith of a Catholic faithful."

But on Rorate Caeli, via, in particular, their Twitter feed, bashing, trashing, mocking, running His Holiness Pope Francis into the ground, and treating him like filth, is the focal point of Rorate Caeli's daily life.

Everybody on this blog is aware that everything that I said above is true.

-- FAKE NEWS, SECULAR AND RELIGIOUS--IT'S GOT TO END, PRAY GOD!

"We all know that so much of the 24 hour a day news on the cable news shows and on network broadcast stations is fake news.

"But the same is true about some right wing Catholic blogs who report hearsay and malicious gossip about Pope Francis and others in the hierarchy, but particularly Pope Francis.

"I would say that in days gone by this could have led to excommunication of Catholics. Perhaps it should return and with a vengeance.

"1Peter5 has a remarkable story today that I would classify as fake news. It is scurrilous and not worthy of Catholics reporting such nonsense as news when it is simply fabrication."

Another IMPORTANT, BREAKING NEWS, THIS IS HUGE yawner-type story from Rorate Caeli.

I know that Bishop Schneider is billions of times holier and more important than I, a sinner and nobody.

That said, what did Bishop Schneider say? What is his point or points? What is Rorate Caeli's point?

To use, via clever questioning, Bishop Schneider to downplay Pope Francis' awesome, God-given authority to govern, teach, and sanctify the Faithful via the takeaway message...don't make Pope Francis the focal point of daily Catholic life...

...which Rorate Caeli violates daily as they focus obsessively, but hatefully and negatively, upon Pope Francis.

Rorate Caeli has a lot of nerve to promote that message as they don't make Jesus Christ their daily focus.

Again, and the following is a fact, as everybody here is aware: Pope Francis is Rorate Caeli's daily focus...but only to mock and attack him.

Rorate Caeli has, once again, demonstrated it's two-faced nature.

The folks there do not want us to focus upon Pope Francis...expect that is what Rorate does daily...but only in negative fashion.

While they run Pope Francis into the ground daily, and portray him as a leftist, communist, destroyer of Catholic teaching, Rorate Caeli is on record with the following assessment of His Holiness Pope Francis:

"Indeed, it can be said unhesitatingly that this is one area in which the Pope will find mostly allies in Traditional Catholics.

Rorate Caeli is two-faced in regard to Pope Francis...who, on Rorate Caeli is portrayed as the "leader of the world's leftists"...a left-wing, communist-loving radical...

...but also portrayed as a Traditionalist in regard to Catholic social/economic teachings.

"The Buenos Aires bishops’ instructions do not express directly a heresy.

"Yet they allow, in individual cases, “divorced and remarried” people to receive Holy Communion in spite of the fact that they do not want to stop sexual relationships with their non-conjugal partner.

Gerhard Cardinal Müller declared that "if you look at what the Argentine bishops wrote in their directive, you can interpret this in an orthodox way."

Is he correct? Or is Bishop Schneider correct?

And there you have it. All of the above discounted because it's obviously coming from a biased leftist political ideology.