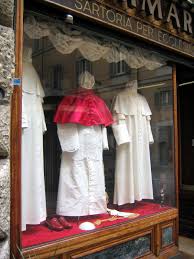 In my most humble evaluation of the Church today, it seems to me that we now have in the Latin Rite (this commentary excludes the Eastern Rites) three branches.

For simplification purposes, I will describe them as the Latin Rite of the "past, present and future."

For lack of a better description, we have the Rite of the past, exemplified as the backwardists, represented by the SSPX. They simply do not accept Vatican II and prefer the Church of Pope Pius XII but up to a certain year, like 1955 before the liturgical books experienced some tinkering.

Then we have the Rite of the Church of the present interpreting Vatican II in continuity with what preceded. Thus there is a bit of backwardism and forwardism in this Rite. We can say that Pope Emeritus I also known as Benedict XVI is the head of this Church of the present as His Holiness is still living and at the Vatican to boot.

Then we have the Church of Forwardism headed by Pope Francis I. We know where this Rite of the Church is going, the way of liberal Protestantism exemplified by the various branches of Anglicanism. It is the Church of the culture and anything goes as long as cultural dictates it and what people believe confirms it.

Each of these three branches need a pope. Thus we will have one Latin Rite with three popes.

I would recommend that the SSPX join with the FSSP and other groups that prefer the Church prior to the liturgical changes of 1955 elect a pope from their number. That pope could well be named Pope Pius XIII.

Thus, one could pick and choose which pope and rite they will follow, but still be a member in good standing with the One, Holy, Catholic and Apostolic Church with three popes.

This commentary must be spirit inspired!

No, not technically or any other way.

This is not difficult to uderstand...

Oh my, FRMJK, such backward thinking. Yes, when we look backwards, one might say he is an emeritus pope, but not those who believe in the God of surprises, like Pope Francis and look forward to the forwardist Church. In that Church wwe have two popes, one emeritus and one forwardist. It doesn’t take rocket science to figure this out.

I think it was Martin Luther or Andy Warhol who said, "In the future, everyone will be pope (or famous, same thing) for five minutes."

This is inevitable in The Church Of Too Busy To Know God.

I thought Fr K had a parish to run, conversions to make and vocations to foster so it seems odd that he devotes so much time to monitoring this website

Father McDonald, I ask the following in respectful fashion:

Is this thread a lampoon of the ridiculous liturgical factions...the nonsense...within the Church? I ask that as you have a tremendous sense of humor.

Two or ten, I think Pope Benedict's resignation was a disaster and wrong, and I think any sort of reformation trifurcating the Church is wrong. I am at least skeptical of ecumenism and belive strongly this would be the adults leaving the home to the prodigal children.

"Monitoring" this website takes two, maybe three minutes a day. Once in a while a Google search for a quote or statistic takes 2 minutes more.

Someone has to keep an eye on the kids in the playpen....

Nothing makes me admire the priesthood more than a priest who shows up at another priest's blog, only in order to argue with the blog owner. Just a wonderful example of showing the path to a holy life. Especially the lying part about 2-3 minutes, where you obviously go through comments on multiple blog posts in order to argue even more.

Fr K lies all the time. After all, he is a Dem operative masquerading as a Catholic priest. Remember, Abortion is "healthcare," the biggest lie of all.

I agree with rcg, the Emeritus Pope's decision to resign while perhaps justified at a human level (if we were to know the real story), has been disastrous for the Church. Perhaps my own perception, but, an endless and hopeless malaise has become firmly entrenched and I don't see that changing for the foreseeable future.

Bob - What makes you think that a priest's comments should not engender disagreement or, correction?

Seems to me you want to admire those who agree with you and chastise those who do not conform to your image of the milquetoast cleric who NEVER raises his eyes from the ground, who NEVER takes a stand, controversial or otherwise, and who NEVER makes anyone think.

Well, welcome to the real world.

And if priests are concerned about being "admired," - I don't - then they have some growing up to do.

No, TJM, he just thinks it seemly year in and out to attack another local priest's small blog to publicize a personal and ideological difference and conflict. It is exceptionally petty. He COULD publish his own blog, but that is too much trouble. Far easier to vandalize someone else's blog. And then he talks playpens as if he the mature adult in the room. Pathetic. He no longer rates an honorific "Father" from me, as that is an insult to all the good Fathers in the world.

Kavanaugh, welcome to the real world.

Bob, like so many immature folks these days, you understand disagreements to be attacks. They're not.

Believe it or not, Fr. McDonald can be wrong in his facts and in his analysis. His erroneous claim that we currently have two Popes is wrong and suggests that one of the marks of the Church is irrelevant.

Now, maybe you and others would like to see such a sad reality, but I disagree with that. Not an attack, a disagreement.

As for "rating," you again think that you approval is wanted or necessary. It is not.

Hey, FRMJK, I resemble that! The Jesuit head of the synod, and forgive my spelling, has stated publicly (Hollerich, I think, and a Cardinal too) that Scripture and Tradition are wrong about human sexuality and gender as well as marriage, the Sacrament of Marriage and that we must consider social sciences to be a source of revelation to inform and change doctrine and dogma.

Thus, what you say I said is no more outrageous than what this Cardinal is suggesting.

Father McDonald said..."The Jesuit head of the synod, and forgive my spelling, has stated publicly (Hollerich, I think, and a Cardinal too) that Scripture and Tradition are wrong about human sexuality and gender as well as marriage, the Sacrament of Marriage and that we must consider social sciences to be a source of revelation to inform and change doctrine and dogma."

The Jesuit head of the Church... :-) has taught otherwise.

“I fully believe in the tradition of the Church. And what is important in this process is not a change of doctrine. But what is important is to listen to everybody, to listen also to the suffering of people. I think of parents, for instance, of people concerned. And to have a change not of doctrine, but a change of attitude, that we are a church where everybody can feel at home. So I am not in favor of changing any doctrine."

"The Jesuit head of the synod, and forgive my spelling, has stated publicly (Hollerich, I think, and a Cardinal too) that Scripture and Tradition are wrong about human sexuality and gender as well as marriage, the Sacrament of Marriage and that we must consider social sciences to be a source of revelation to inform and change doctrine and dogma."

It would be helpful to have a link to his words. Not a commentary, but the actual statement.

Back to your "Technically we already have two popes."

No, we don't, not technically nor otherwise. You are wrong.

Now, Bob thinks it's just terrible that a priest (!) would point out the error of another priest. Bob thinks that when an error is pointed out, it is an "attack" on the errant one. Well, Bob is wrong, too.

Fr K engages in projection as no one is more immature than he (Mark Thomas is a close second). I pity his parishioners. I hope they get a real priest next time. I think he comes here to post to fulfill some psychological need of his. It is obvious he is jealous of Father McDonald.