I KNOW THAT THE POPE FIRED HIS EMINENCE, BUT THIS MAY WELL REHABILITATE HIM FOR THE PAPACY ONCE AGAIN!

As everyone knows, I despise beyond despise what those priests and bishops, who just can’t help themselves, do at the Introductory Rite of the Mass and so does Cardinal Tagle, thanks be to God!

Good morning, good morning I said! How are you and I hope you are having a great day. It is a great day when we enter into Mass with the Scriptures that the Mass has. I won’t preach a long homily at this point, but let me point out who is in the congregation, especially those who are visiting. Can you stand and tell us you name and where you are from?

And the Scriptures, especially the Gospel, what a blessing it is to hear the words of Jesus spoken to us, and reminding us that He is God and we are not. He forgives sins and heals a man on a stretcher. Isn’t that precious. But let me stop here and let you call to mind your sins, especially against the environment and in favor of bombs and war and all that kind of violence, but especially for not recycling and for using plastics and throwing them into the sea. Pause and beg God for forgiveness.

Lord Jesus, forgive us for treating others as aliens in a foreign land. Lord have mercy.

Lord Jesus, forgive us for making the climate change. Christ have mercy.

Lord Jesus, forgive us for being too Catholic and backwards. Lord have mercy. 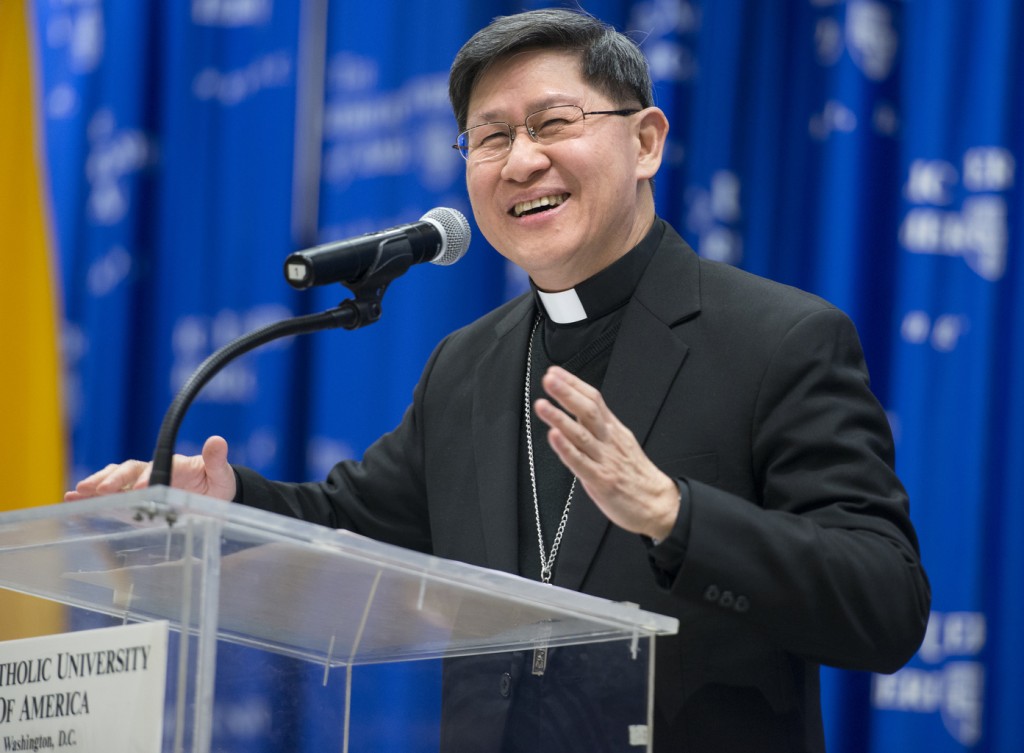 Priests should not wish their parishioners “Good morning” at the beginning of Mass, according to Archbishop Luis Antonio Cardinal Tagle of Manila.

The words “The Lord be with you” are sufficient, he said.

“With all due respect, my brother-priests, I do not see the need for saying ‘Good morning’ and similar greetings when God’s Real Presence in the Holy Eucharist alone suffices,” he said.

“Is not the expression ‘The Lord be with you’ more than enough?” he asked.

Archbishop Tagle, who was speaking during his Corpus Christi Mass at the Santa Cruz Church in Manila, said that priests seem to give more emphasis on “Good morning” than on the all-important “The Lord be with you”.

Anyone can wish someone good morning, but the words “The Lord be with you” are only heard during Mass, which is why they must be emphasised, he said.

Some priests will repeat “Good morning” if they don’t hear the reply “Good morning, Father,” he said, but don’t seem at all concerned if no one responds to “The Lord be with you”.

Archbishop Tagle’s comments were posted in an article on the Catholic Bishops’ Conference of the Philippines website.

The archbishop, who is often considered to be progressive rather than conservative, was appointed in 2011, and was made a cardinal in November 2012.

I agree with His Eminence. It is idiotic and just a sign of a priest's vanity

As for greeting people with, "Good morning," I remember a faculty member in the seminary told us, "The people who come to mass aren't there for a weather report."

Equally as unfortunate is to hear after the dismissal, "Have a nice day everyone."

All very true, including comments. Will that change anything, or will the moronic platitudes still continue, even to one's death bed? The answer is found in how fulfilling most Catholics find their religion and vote with their feet and wallets. We have psychologists and the far cheaper internet if all we want to hear is how wonderful we are...

All very well, but such “comments” by leading clerics mean nothing and will change nothing: that’s why my own name for the NO Mass is the LCD Mass, the Lowest Common Denominator Mass.

sarto2912 is right. The period of experimentation will never end. Generations of clergy have been trained to think the Mass is a personal playground - and when was the last time you heard of a diocesan bishop actually cracking down on such nonsense?

In the 3.5 years I was in seminary and in the 37 years I have been a priest, not once has anyone said or suggested that the mass is a priest's personal playground.

Fr K but you change the texts which is verboten

Cardinal Tagle,who once famously said"why can't we just forget about the Rubrics and just celebrate the Mass!"Obviously he is fence mending,with a view to the Chairof Peter.

Fr K - I imagine you voted for Warnock because as Warnock says: Jesus would support abortion!

Bless his heart, Herschel is the relative who, when he visits, you give a glass of iced tea and tell him to sit in a chair on the porch until dinner is served.

I will happily admit that I voted for Herschel Walker. My reasons will probably pale against the morally superior observations of Raphael Warnock's supporters. But I'll start by saying I did NOT vote for him because he was a good football player. I stopped paying attention to pro and college football back in the late 1980's, as the whole enterprise strikes me as a self-perpetuating revenue-machine that gets increasingly expensive as all its participants (players and owners) get greedier every year-a lot like the way our government operates.

No, I'll admit that I did not consider Walker's views about vampires, China's pollution and his FBI fantasies. Frankly, that was all irrelevant to me in the voting booth. What I was considering was whether I wanted another vote in the senate that would continue to support the cult of "climate justice" that is killing our economy, or someone who would stop the silliness. What I was considering was whether I wanted a senator who would blindly vote in lockstep to keep passing pork-laden omnibus spending bills or someone who might vote against it. I was really not worrying about Walker's lack of valedictory credentials from high school. Instead I was worrying about whether my state would have another senator who would blindly support legislation to hire a posse of thousands of IRS agents to harass an already overtaxed public. Concerns about Covid dry-mist sprays really weren't in the equation of my choice. I was far more concerned about having a senator that would not rubber-stamp legislation to enshrine the Moloch ritual of abortion as some sort of "civil right". I was hoping that we might have a legislator for our state who wouldn't cower in front of the LGBTQ/Let's-mutilate-kids-and-call-it-healthcare lobby.

Now I WILL admit that I did have a slight problem with a man who purports to be a minister of Jesus Christ who publicly admits his admiration for another "minister" in Chicago who preaches hate against white people and cries out "God Damn America" (looks like he's getting his wish). And I do find it slightly troubling that a purported "minister of the Lawd" can support unregulated baby-killing as health care.

But then again, we have a priest among us who brazenly supports the same agenda. Thanks to the likes of him, we will never have to worry about Herschel Walker's views on vampires and werewolves.

The ONLY reason Walker was a vote-getting candidate - and he wasn't pushed into the race by Trump because he was insightful, intelligent, resourceful, or capable - is because he was a star football player. Absent his being a sports celebrity, he brought nothing to his candidacy.

I did consider Walker's string of lies about his college graduation, in the top 1% no less, his being named Valedictorian in his high school, the number of employees in his businesses, his "time" as an FBI agent, a deputy sheriff, and a certified peace officer, because it tells me he would lie about anything even though the truth was staring him and everybody else in the face. Interestingly, that was Trump's process, too.

I did consider his utterly preposterous claim to have a dry mist spray that would kill covid. What part of his probably severley damaged brain that came from is anybody's guess. A man who deals in fantasies isn't, in my judgment fit to be a US senator. You think he is.

As for your being over taxed, I am sure you will do the honorable thing and refuse to accept ANY benefit that comes your way as a result of those terribly high taxes you pay. If you get social security or veterans' benefits, you'll give those back. You won't ever drive on a road that was paid for with taxes, visit a library that was paid for by taxes, take a plane trip that is made safe by taxes, accept protection provided by our military or law enforcement that is paid for by taxes, receive any services provided by a person who was educated in public school which, as you might have guessed, are paid for by taxes.

Note: Among the 37 countries in the Organization for Economic Co-operation and Development, the US tax rate is 32nd.

Watch out for that IRS "posse." I hear they're heading your way. (Heaven forfend that we should expect people to pay their taxes and, when they cheat, catch them.)

Wow! Climatology and Darwinian Evolution are important for senatorial voting decisions! Who would have thought?

Especially that SECOND thought--I'm having a hard time remembering when understanding of Darwin's theory was essential knowledge for a senate vote...but what do I know?

That MUST be the reasons that all of our expert senators and our Alzheimer-in-Chief are so resolute about destroying the coal industry and limiting our energy supply to "incentivize" average Americans to buy unaffordable electric vehicles that run on power created by fossil fuels! Yeah! That's it!

Father, your seamless garment is soiled with the blood of the unborn and the drippings of your "enlightened" pride and vanity. And your implication that most of us do not pay enough taxes, well, that alone speaks volumes.

Jerome - Lack of understanding of even the basics of science is very important in making voting decisions. I suspect that many of the people who think it is not are the people who share Walker's ignorance

I made no suggestion that we don't pay enough taxes. I challenged you to do the honorable thing since you are so very overtaxed. But, of course, you're going to keep enjoying and benefitting from the things your taxes pay for, all the while muttering under your breath how terrible taxation is. You might as well go out to eat, enjoy the meal, and then complain about how much it cost.

The coal indistry is going the way of the whale oil industry, the running board industry, the buggy whip industry, and the film industry. That industry has been declining for 20 years, including under Trump who declared he was going to bring it back. Other sources of enery are cheaper. Coal-fired generation plants are for more expensive to build that natural gas plants.