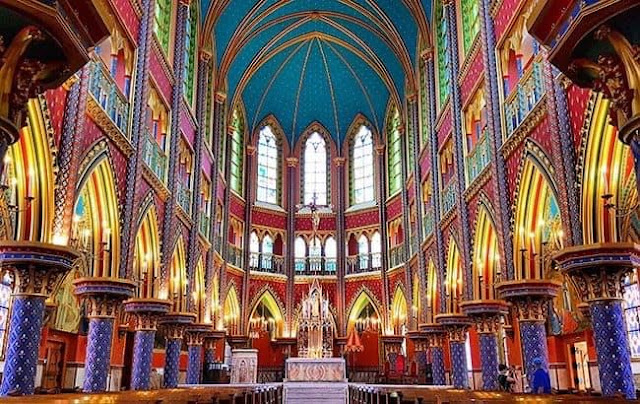 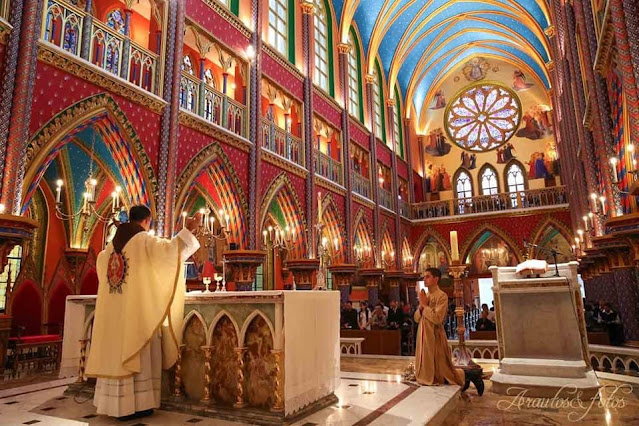 The Church of the "Heralds of the Gospel" in Sao Paulo, I think...

Over. The. Top. Waaaaaaaaay. Over.

I have defended a lot of bright colors, but not the Fair Midway. Was looking for carnival booths down the sides. Now watch this turn out to original scheme from a gingerbread Victorian era somewhere.

Brazil. Carnivale. Of course. New Orleans, Biloxi, Mobile, etc did not go as far as to do up the churches in Mardi Gras colors, except for removable decorations.

I like it, but it would look better with an equally colorful and ornate traditional altar.

In the Middle Ages cathedrals and larger parish churches would have had polychrome interiors, and it didn't stop there; the west front of Lincoln cathedral with its myriad saints would have been painted in what to modern eyes would appear garish colours.

Similarly, when the men of the Renaissance 'rediscovered' classical architecture they assumed that Roman buildings and statues were unpainted; in fact the paint had long since worn off.

Though garish through the modern lens of some, I'd take this in a heartbeat over the Newman Hall Church. This is finished with bright color, Newman Hall with surface rust. Seems a no-brainer.

Even as recently as the 19th Century, Victorian era homes in the United states were painted in bright, contrasting colors. As John noted, sun and weather quickly faded the true colors from both wood and memory. So when modern restorationists found the formulae for the paints they were shocked at the outcome. Check out Winterthur house for an example. Winchester House, too.