LET ME TOOT MY OWN HORN: A PERFECT RENOVATION AND RESTORATION

The photos below are from this past Sunday’s EF High Mass with the Church of the Most Holy Trinity’s newly assigned pastor, Father Jacob Almeter.

But let me toot my own horn on this church’s perfect renovation. The altar pictured is the altar that was consecrated in April of 1863 and has been consistently in use since that time and through Vatican II until this very day.

To accommodate the “new” Mass and facing the congregation, the “table” part of the altar/reredos was separated from the reredos around 1966 or so. The altar had been placed four steps up from the sanctuary. Thus, the altar part was brought forward to the edge of the fourth step to allow the celebrant to get behind the altar. From the congregational point of view, nothing had changed except the priest could no longer approach the altar-table at the foot of the altar, but instead had to go around to get behind the “table”.

Moving the “table” to the edge of the fourth step was not accompanied by added supports under the altar which had those supports under the church for the altar in its original position. Thus in the ensuing years the entire sanctuary began to “bow” because of the under supported weight of the altar.

In 1998, the entire altar and reredos was dismantled. The reredos was pushed back several feet toward the back wall (which prior to this renovation there was an inordinate amount of wasted space behind the altar/reredos). The altar then, was returned to its original location with its proper supports under it. The fourth step was removed and thus, there were only three steps from the foot of the altar to the altar itself.

The priest can approach the altar from the front and walk around the entire altar on the third step. And of course the Mass can be celebrated either ad orientem or facing the people. Prior to this splendid renovation because of the 1966 moving of the altar, ad orientem would not have been possible.

How cool is that? When I was at Most Holy Trinity from 1991 to 2004, I celebrated the “new” Mass a few times ad orientem. And by 2000, we had a monthly new Mass in Latin at the normal Saturday Vigil Mass. For the first time in my priesthood, I heard the propers of the new Mass in Latin chanted. I had never heard the “new” Mass’s propers chanted either in Latin or English until 2000! 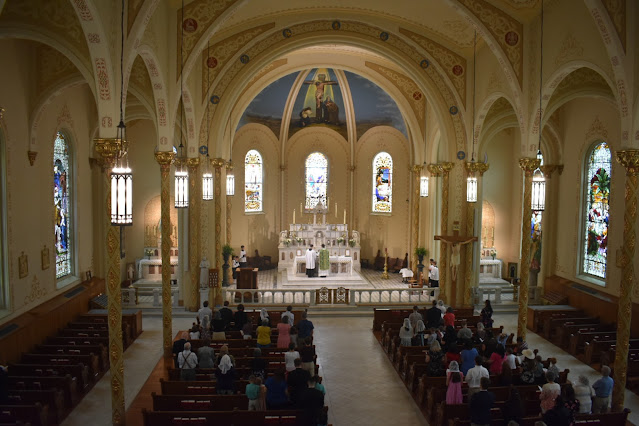 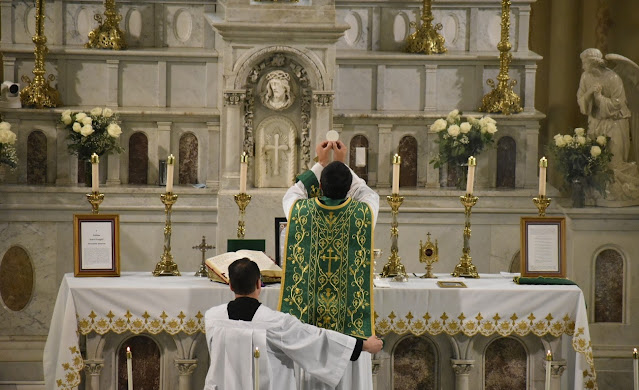 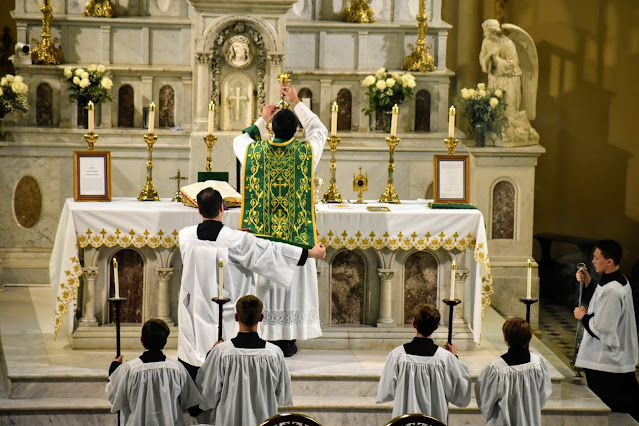 BTW, the six candlesticks on the reredos came from the closed “Sacred Heart Church” six blocks away and are original to it. “The Last Supper” scene from the facade of Sacred Heart’s altar was removed and placed on the wall in the narthex of Most Holy Trinity.

Candles are not placed on a 'reredos'. They are either placed on the mensa or on gradines behind the mensa. Since the altar here is free-standing, and at least four candles are required for a Missa Cantata, and six are more usual, they are correctly placed. Apart from anything else, they support the altar cards.

Fr Allan, you are only a couple of years younger than I, and I am surprised that you hadn't heard the 'new' Mass Propers until 2000. I heard them as early as 1973, and two years later bought the 1974 Graduale Romanum which remains definitive. In those days it was difficult to find a Latin-English text for the Ordinary of the Novus Ordo. It was not until 1977 that the CTS published this in booklet form.

In the 1970s the Sung Latin form of the NO was still quite prevalent, not least because the older Mass was still very much restricted, churches with choirs were reluctant to jettison their musical tradition, most priests had been trained to celebrate the Old Rite, and all Catholics under 30 had been brought up with the Latin Mass.

Looking round the congregation at the Solemn Latin Mass at the Oxford Oratory there are still a few old codgers like myself but we are well outnumbered by the younger generation. Even the clergy appear outrageously young.

I must say whoever moved the altar without knowing a thing as to adequate engineering, building, or load bearing, was rather lucky the altar and possibly even including celebrants did not disappear one fine day.

Chip, you might say that changes resulting from Vatican II were not supportable, in the long run.