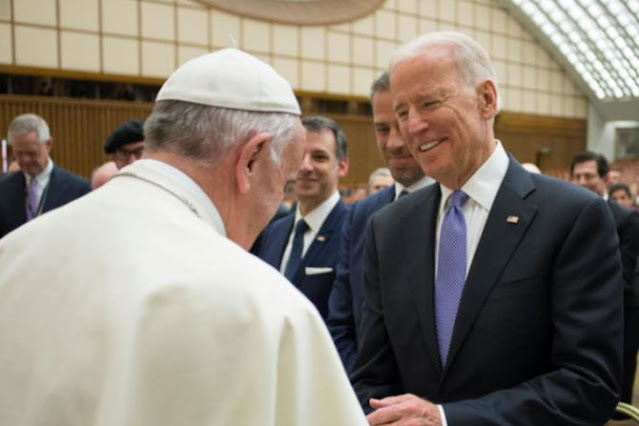 No, Pope Francis did not cancel a meeting with President Biden

I hope this news report is true. If so, it may cause American bishops to finally act

Well, that's at least ONE less sacrilegious Communion that day.

The writer for the NCR is beating around the bush. Highly unusual for a Catholic President to go to Europe and not meet with the Pope. Especially so with some of what is being discussed among world leaders as being also important issues to Pope Francis.

If I had the chance I wouldn’t meet with Francis I would head over to the monastery and meet His Holiness Pope Benedict. I could care less about Bergoglio.

"Highly unusual for a Catholic President to go to Europe and not meet with the Pope."

President Kennedy visited Europe in 1961. He visited France, Austria, and England. He did not meet with the pope.

The actual story seems to be the Biden team requested a morning Mass with the pope but the Vatican declined due to current USCCB deliberations.

Which is quite a story in itself.

I have read in Australian newspapers that Biden’s ancestry is mainly English; not Irish.
And his attempts to ape JFK are quite pathetic.
As well, what Irish Catholic of his generation names his sons Beau and Hunter?
Sky TV here often shows Biden for what he is; ie: an old man experiencing serious cognitive decline, confusing Libya with Syria, confused about what state of the USA he is in, introducing his granddaughter as his deceased son. The footage we get here is endless. Many laugh, but some find it sad, and at times almost excruciatingly painful to watch; almost “elder abuse”…
In some pubs here, Biden jokes are quite popular. And many wonder why so many US comedians etc give sleepy Joe such a free pass? It is all quite bizarre!

What is PATHETIC is saying a person who has 62.5% Irish ancestry is "mainly English."

What is PATHETIC is saying that he's trying to "ape" JFK, as if a person could do anything today to adjust his ancestry.

And if you really think he is experiencing "serious cognitive decline," then it is PATHETIC to make that the butt of jokes.

Before getting a touch hysterical, why not read what Monica wrote carefully, or are you again under the influence of alcohol (or have a hangover?) …..how can you assume she is one of the millions worldwide laughing at Biden’s bizarre gaffes and not one of those who finds it sad to witness?

It seems to me Monica's problem, and that of many others who allow their biases to cloud their perceptions, is that she catches a glimpse of something that seems to confirm her in her dislike for Biden, to wit "I have read in Australian newspapers that Biden’s ancestry is mainly English; not Irish."

Without giving it another thought - and therein is the main weakness - she concludes that 1) the article she glimpsed actually says what she thought it said, or 2) the article is accurate, despite what we all know about the accuracy of some (much?) mainstream media, or 3) that her dislike for Biden now has further support - he lies about having Irish ancestry.

Tragic on many levels.

Typical of Fr K and or “anonymous”,

Nitpick on one little part; eg: an Australian newspaper article apparently speculated on the amount of English ancestry Biden has…(.which Monica didn’t even state she believed was absolutely true) in a pathetic attempt to undermine the credibility re claims of the bloody obvious relating to, at minimum, Biden’s serious mental decline.

By the way, in the pub yesterday, some people were laughing at FINALLY coming across a significant actor or comedian (Jim Carrey, I think) has done what a hundred plus could have done (and have done with past presidents) - performed a mocking imitation of China Joe, that was quite funny.

“Anonymous”, as John Cleese and others have said, in the Age of Woke insanity, humour is needed more than ever (and should be neither restrained nor cancelled) so as many people as possible - through humour - can have a SANE sense of proportion…

So many of the wacky Woke Left not only lack a sense of humour and a sense of proportion, it is they too, the looney Woke Left who are the ones who are ten times more likely to run on emotion, than clear logic and clear rationality….

But then again, such things as logic, reason and evidence based arguments are actually believed by the Woke Left to all merely be the constructs of white, Western, straight males; constructs whose purpose is to oppress women, and racial and sexual minorities…

It is usually obvious when some person has had their mind even partially infected by some aspect of Woke nonsense….

AJP - When you pass on info as a basis for your argument, then, yes, you are agreeing with it.
It's not nitpicking to say, "You are wrong to believe the Australian newspaper reports because they are not true."

That's about as UN-woke as it gets.

It is Sunday afternoon here. I am enjoying today with family.
Your pathetic response, in my opinion, is not worthy of any reply.

But I will write this as a post script:

…why not reflect on the recent interesting comment by someone here re blogs attracting people with personality disorders.
For over ten years, I have come and gone on this blog. Often, at different times, learning a lot, and occasionally laughing…but I can take a break, sometimes a long break, from this blog or another 6 or 7 blogs…no problem..

Clinicians, like my wife, have informed me that those with disordered personality traits….what is key and defining is that those disordered traits are NOT episodic but CONSTANT ….over more than a decade I’ve seen Gene and Bee and others come and go….
But who or what has been a CONSTANT on this blog over a decade?

Fr K…..Fr K under his aliases ….or Fr K and a couple of his more pathetic clones…

Dear “Anonymous” we down under would NOT normally laugh or make jokes of any ordinary elderly person experiencing serious cognitive decline. However, Mr Joe Biden is, in effect, the Commander in Chief too to our sons and daughters in the Australian Defence Forces.
So what we can do, as millions around the world often do, in a situation like this - ie: it is a case of laughing so we don’t cry…

Now it is back to the BBQ and good red wine and fine local beers; and our families…

We await your, usual, brilliant and profound last words.

My work is done -

AJP - You are entirely free to believe false reports and rumors as is any Australian or anyone else for that matter. And I suppose you are free to repeat them and them claim, "Oh, I just repeated them, I don't believe them" as some kind of defense.

And while you may not enjoy it, others are free to point out the errors and to offer you the facts.

Again, you are free to accept the correction or, as in this case, to suggest that the facts are irrelevant because, in the opinion of some clinician, the person citing them has disordered personality traits.

Those are just the facts. What do clinicians say about those who CONSTANTLY reject facts I wonder...

What “facts” are you referring to, darling? Please explain. Please enlighten us.

So the “facts” are these?

Mr President Joe Biden is still mentally as sharp as a tack.

The USA, the West and the free world are damned lucky to be led by a man full of moral integrity, possessing both clarity of vision and great strategic insights into everything from geopolitics to post Keynesian economic realities…etc and so on…

Anyone who does not largely agree with the above must be either not very bright or being misled by biased newspapers etc from Australia to Brazil to Poland etc..

Thank you, above anonymous!

I now have got it!

I am now fully committed (in more ways than one) to self publishing my manuscript, compiled from comments on this blog - namely:

“The Wit and Wisdom of Fr K”

I was “NZ seminarian” on this blog….I am now a seminarian on 12 months leave, and residing in a long term Wellington (NZ) psych ward.

Postal money orders of $10 can be sent to me (for cigarettes and chocolate money) care of The David Lange Clinic, Wellington, NZ.

Followers and contributors to this blog will be delighted to hear that on discharge from this clinic, I will be flying to Chicago, USA, where the wonderful Catholic hierarchy there have accepted me as seminarian in their archdiocese!

Claire - I will point out one. An earlier post indicated that she had read in un-named "Australian" newspapers that Biden's ancestry was "mainly English; not Irish."

You have been enlightened.

For the others, re-read the posts on this thread.

I had an inner laugh in juxtaposing the comments of the person expounding on the false reporting of an Australian newspaper, and the comment of one Billy Clutterbuck.
It should be long apparent that our American newspapers have their own problem with false reporting and specifically in this case, about their glowing characterization of our current President.

The US media loves the current president since he is pro-abortion, gay marriage, and pro open borders, the 3 things the media holds dearest