BOMBSHELL! ONE OF THE SOURCES AS TO WHY THERE IS A LOSS OF BELIEF IN THE REAL PRESENCE OF CHRIST IN THE MOST HOLY EUCHARIST!

OH MY! MEMORIES AND NOT GOOD ONES: As I was scrolling though facebook, “I’m fed up with ugly churches” posted this photo of “Our Lady of the Fields” Millersville, MD: 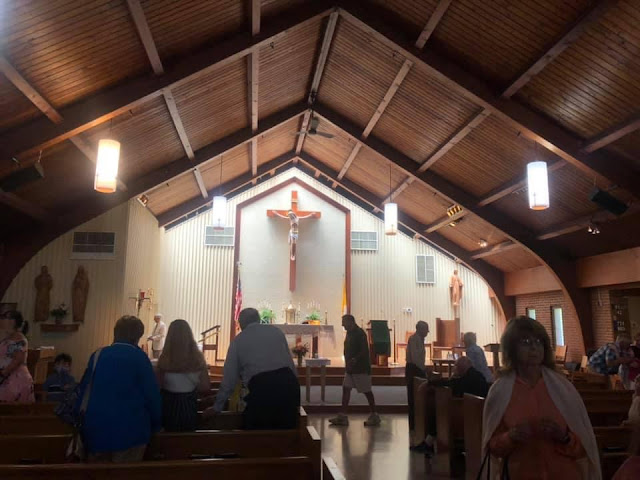 Around June of 1979, give or take a year, I went to the first Mass in this very church of a newly ordained Jesuit priest whose mother was my classmate in the seminary. Yes, you read that correctly, but that’s not what this post is about—my mother classmate, that is.

The Jesuit thought that the Mass as a Meal, a convivial meal, needed to have leavened crusty French Bread as the substance to be transubstantiated, although that good Jesuit would never have describe it with that oh so pre-Vatican II terminology.

And what better way to distribute Holy Communion than to Break the Bread as each communicant approached the variety of ministers of Holy Communion. And if you thought you could receive that Meal on your tongue, like a child being fed by her mother, forget about it. The chunk of Crusty Christ was forced into your hand, like it or not

And after Mass, the poor, believing parishioners of “Our Lady of the Fields” were found on their hands and knees, picking the large and small Crumbs of Crusty Jesus out of the then red carpeting in the sanctuary where the ministers stood to force Holy Communion into communicants’ hands.

They and I were horrified and aghast. I was with a seminarian friend of mine at the time. He laughed at the lay people so scrupulous about all the crusty crumbs of our Lord on the carpet. He lamented their Crumb theology! That priest is now laicized and not by choice.

And thus, this kind of sacrilege and outrage was repeated time and time again throughout the 60’s, 70’s and 80’s, perhaps two or three generations of Catholics exposed to practices that has led to a weakened Faith in the Church’s teaching on the Real Presence of Christ in the Most Holy Eucharist.

By the way, that church back then and now reminded me of my home parish of St. Joseph in Augusta before they built a new church next to it.

Sounds exactly as a Methodist service, but Methodists are smart enough to use a vacuum.

This church isn't bad. Tabernacle in the center of the Sanctuary, a corpus of crucified Christ, celebrant chair is off center and tasteful statues. I think someone has tried the make the best out of the hand that has been dealt and has done a good job.

That church in the photo looks a lot like the interior of the Catholic church in Valdosta that proudly mentions in its bulletin its "mission style" architecture.

This church is typical mid to late 1950’s A-frame architecture that both Protestant and Catholics churches used at that time because it was economical but warm and the A-frame gave a sense of height and tradition. In the Diocese of Savannah, during this time period, many churches were built with this A-frame style, St. Joseph, Augusta, St. Teresa, Albany, St. John the Evangelist, Valdosta and many others. St. John’s and St. Teresa’s were the largest of this style. I like the style to be honest with you. In the church posted here, it appears they removed the sacristy on the right side to expand the sanctuary but not the the left side which creates an imbalance. Both should have remained or both removed.

This style of church looks surprisingly nice when paired with salvage (or newly commissioned) wooden altar furnishings. Neo and Victorian Gothic work especially well with the wooden sloped ceilings. Build out the other side of the sanctuary to establish some symmetry, plop in a Gothic high altar with a nice communion railing, and get some better lighting and we'll be in business.

Is that a REAL Church or is that a SEARS Church?

There must have been a common set of building plans shuttled around the US during this period because a lot of Catholic churches built during this time look like this. They can be improved, at great expense