WOW! IT SEEMS THAT VATICAN NEWS AND POPE FRANCIS HAVE EXPERIENCED CONVERSION TO OUR LORD AND ARE WILLING TO FOLLOW POPE BENEDICT’S LEAD IN CALLING FOR COVERSION TO OUR PERSONAL GOD! 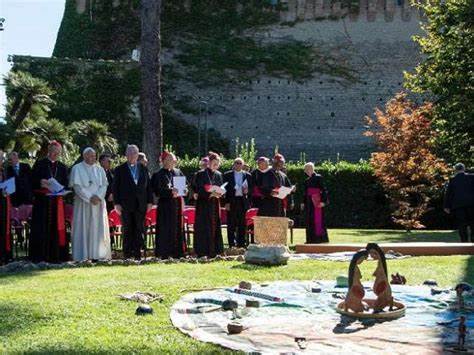 Has the pope and the Vatican finally acknowledged that to worship synodality, inculturation, Vatican II, ecclesiology is IDOLATRY and a DEADEND?

Read this Vatican New editorial and tell me what you think!

The scandal of abuse and the reform of the Church

The valuable indications contained in the letter in which Pope Francis rejected the resignation offered by Cardinal Marx.

“The reform in the Church has been carried out by men and women who were not afraid to enter into the crisis and allow themselves to be reformed by the Lord. It is the only way, otherwise we will be nothing more than ‘ideologues of reform’ who do not put their own flesh on the line.” This is a passage from the letter with which the Pope rejected Cardinal Reinhard Marx's offer to resign from the leadership of the diocese of Munich and Freising. It is a papal text full of valuable indications, which go well beyond the particular case to focus once again on the essential, indicating a Christian outlook and attitude towards reality. This view and attitude are often forgotten when — even in the ecclesial community — there is a risk of attributing salvific value to structures, to the power of the institution, to the necessary and increasingly detailed and stringent legislative norms, to corporate “best practices,” to the logic of political representation transplanted into synodal paths, to marketing strategies applied to the mission, to the communicative narcissism of special effects.

To affirm, as the Bishop of Rome does, that in the face of the scandal of abuse, “we will not be saved by inquiries nor by the power of institutions. We will not be saved by the prestige of our Church, which tends to conceal its sins: nor will we be saved by the power of money or the opinion of the media (we are often too dependent on them)” means once again pointing out the only Christian way. Because, as the Pope wrote to Cardinal Marx, “We will be saved by the door of the only One who can do it, and by confessing our nakedness: ‘I have sinned,’ ‘we have sinned’… It is in this way of weakness that the Church finds strength, when it does not have trust in itself and does not feel like the protagonist, but asks for forgiveness and invokes salvation from the only One who can give it.”

What Pope Francis wrote in the letter to the Cardinal of Munich and Freising might appear to some as a “non-answer.” Because it does not remove us from the grill, it doesn’t close the wound, it doesn’t allow us to accuse others by pointing our fingers. Instead, it calls for each of us “to enter into the crisis,” and to confess our own impotence, our own weakness, our own littleness in the face of evil and sin, whether it be the satanic abuse of minors or thinking we can save the Church thanks to our own ideas, our own strategies, our own human constructions.

The Pope emeritus, Benedict XVI, in notes prepared for the February 2019 summit on the protection of minors (and later published), wondering what the right answers to the scourge of abuse might be, wrote, “The antidote to the evil that threatens us and the whole world, ultimately can only consist in abandoning ourselves” to the love of God. “If we reflect on what must be done, it is clear that we have no need of another Church invented by ourselves.” Today, “the Church is widely regarded as just some kind of political apparatus,” and the crisis caused by the many cases of abuse at the hands of priests, presses us to consider the Church as something that has failed, which we must now take decisively into our own hands and re-form in a new way. But a self-made Church cannot constitute hope.”

IN 2010, in the midst of the storm caused by the abuse scandal in Ireland, Pope Benedict XVI pointed out the penitential way as the only viable path, saying he was convinced that the greatest attack on the Church came, not from external enemies, but from within. Today, his successor, Pope Francis, with a consistent gaze and emphasis, reminds us that reform, in Ecclesia semper reformanda, is not accomplished by political strategies, but by men and women who allow themselves to be “reformed by the Lord.”

Benedict got it right, abandon yourself to love God beyond all created things and return the love he has for us. That heals all ills.

Nobody else seems to think the two greatest commandments are much more than figures of speech, and surely not to be taken literally.

Pope Francis as the new Pope urged the Faithful to make a mess. One can argue that he meant well yet the result and much of his endeavor of his papacy is devoted to pursuing one modernist theological effort after another. Recall, he was and still is reluctant to answer the dubia addressed to him by the 4 Cardinals. What are we to think. I confess I do not trust what comes out of the official channels in the way of news or exhortations. I pray for the HF and I know I am not alone.

I can read the directions for operating my new toaster with a false premise and get electrocuted.

Sort of off topic, but why oh why did the Church dump so much of its fasting laws in our “glorious” Vatican 2 era?
I live in a part of Sydney, Australia (which is probably rightly regarded as the most successful “multi cultural” nation on earth.)
I have both Jewish and Muslim neighbours.
Those who are observant Jews and Muslims take fasting seriously!
Yesterday, I heard at the shops, a Muslim lady explain, in broken English, to her son, who looked about 12 years old:
“You ARE old enough to fast now. Why fast? It clears your mind, brings you closer to God; AND it makes you tough!”

But of course, those who implemented a 101 changes in the lives of Catholics, over the past 50 odd years knew better when they axed most of the Church’s traditional fasting laws.

When will those various “anonymous” contributors here (who many claim are Fr K) wake up and realise that what they regard as superficialities in matters from liturgical details to fasting laws - often have a deep significance in the lives of believers!


THE LITURGY AT THE ANGELICUM UNIVERSITY, ROME, IN LATIN OR ITALIAN, IS WITH THE THEOLOGY OF THE LEFT : THEY USE A FALSE PREMISE TO INTERPRET VATICAN COUNCIL II AND SO THE COUNCIL IS NO MORE DOGMATIC ON EENS.

The new Rector, like the rest of the faculty at the Angelicum University, Rome interprets Vatican Council II with the false premise to avoid being labelled an extremist or traditionalist. Since without the false premise LG 8, lG 14, LG 16, UR 3, GS 22 etc in Vatican Council II, would refer to invisible cases and not physiclally visible non Catholics saved outside the Church.Invisible cases are not exceptions to extra ecclesiam nulla salus(EENS).If there are no physically visible cases of non Catholics saved without faith and baptism then there are no objective exceptions to the dogma EENS and the Athanasius Creed which affirm exclusive salvation in the Catholic Church.Vatican Council II would support the past ecclesiocentric ecclesiology of the Church.
So only with the falsehood i.e by confusing what is implicit as being explicit, and subjective as being objective,he avoids the extremist charge of the Left.Then he keeps his teaching job at the university and his religious position in the Dominican Order.But he is in no position to discuss Catholic theology since he would be exposed.He has to support the Leftist ideology and pretend it is Catholic theology,even though it has to be irrational.There is a rupture between faith and reason.
He would know that there is nothing in Unitatis Redintigratio to contradict the past ecumenism of return to the Catholic Church.Also there is nothing in the entire text of Lumen Gentium to contradict the past exclusivist ecclesiology of the Catholic Church.
There is no passage in Ad Gentes to contradict the past Mission doctrines and theology based upon their being exclusive salvation in the Catholic Church, and so all those who are outside, without faith and baptism, are oriented to Hell at the time of death on earth.
The Rector’s New Theology was possible with only the false premise.Without it there can be no rational theology to support the New Ecumenism, New Ecclesiology, New Evangelisation, New Canon Law etc.
So the liberalism being taught to the students at the University of St. Thomas Aquinas Rome, is a break with the past orthodoxy of the Dominicans, and it is political.It is not Catholic and definitely not Dominican.

Anonymous said..."Sort of off topic, but why oh why did the Church dump so much of its fasting laws in our “glorious” Vatican 2 era?"

The Church's fasting practices have changed dramatically throughout the centuries.

Example: The Church long ago had abandoned Her traditional practice of having set aside each Wednesday, and Friday, as fasting days.

During the 1950s, Pope Venerable Pius XII employed the principle that modern society compelled the Church to change Her teachings in regard to fasting.

"It should nevertheless be noted that the times in which we live and their peculiar conditions have brought many modifications in the habits of society and in the activities of common life.

"Out of these there may arise serious difficulties which could keep men from partaking of the divine mysteries if the law of the Eucharistic fast is to be observed in the way in which it had to be observed up to the present time.

"Furthermore, since the introduction of machines for every sort of use, it very often happens that many workers — in factories, or in the land and water transportation fields, or in other public utility services — are employed not only during the day, but even during the night, in alternate shifts.

"As a result, their weakened condition compels them at times to take some nourishment. But, in this way, they are prevented from approaching the Eucharist fasting.

"Mothers also are often unable to approach the Eucharist before they take care of their household duties, duties that demand of them many hours of work."

Dramatic changes to the Church's fasting practices occurred prior to Vatican II.

Today it now seems to be a contest between Fr K and Mark Thomas to see who can nitpick the most while missing the main point being made.

I can forgive Mark for this shortcoming ten times more than Fr K who is supposed to have received some philosophical formation.

Fr K, and your various acolytes or aliases - you are both disingenuous and full of ….

The point of this post by the blog owner is hogwash. You take it seriously if you want, I won't.