A LOT OF CATHOLICS LIKE THIS; WHAT IS A PRIEST TO SAY? 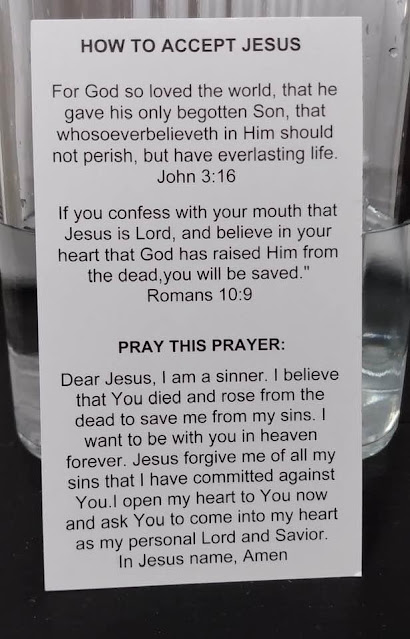 What is a priest to say?

I can't answer as a priest, because I am not a priest. But if I WAS a priest, I would say:

"This is a good starting point, but that's all it is--a starting point. Christianity, whether it is Protestant Christianity or Catholic Christianity requires Baptism. Baptism is a Sacrament in the Catholic Church, a visible sign, instituted by Jesus Christ, that confers grace upon us. If you read the scriptures, there are no accounts of early Christians (or any Christians) "personally accepting Jesus Christ as savior", then getting on with their lives. The when converts confessed their faith in Jesus Christ, the apostles BAPTIZED them. And even then, that was just a beginning. They then received the fullness of the Holy Spirit through Confirmation. So they were "born again" by water and spirit, but all Christians are called to be "born again" on a daily basis, as we strive to conform ourselves to the image of Jesus Christ and continually repent of our sins at newer and deeper levels.

What's a priest to say?

One: "Whosoeverbelieveth" isn't a word.

Two: To "believe" with your heart is not a one time, over-and-done thing. To believe in the Lord Jesus Christ as Savior and Redeemer is something that is done every day in a life lived in service to others.

Three: "Personal" Lord and Savior is a corrupt concept, drawing from the Lutheran Pietism movement which, later, influenced the Enlightenment notions of individualism, and had a significant impact on Puritan thinking. Sydney Ahlstrom writes in "A Religious History of the American People, "Constantly Pirtists raised the urgent question, 'How do I know I am saved?" And they answered their question with an increasing tendency toward subjectivism. (page 239)

To "know" one is "saved" is a comforting, but misleading concept, one that is not supported in the Catholic Church's teaching.

This whole Protestant concept of "Blessed Assurance" and "I gawt saved" and the presumed certainty of salvation is complete nonsense.

We should think about that.

Although it doesn't happen often, if I am ever hasked, "Have you accepted Jesus as your personal Lord and Savior?" I readily reply, "Since salvation depends on what God does and not on what I do, I believe that Jesus has accepted me, unworthy sinner that I am, because what Jesus does is more important."

That thouroughly confuses the questioner, giving me the time to smile pleasantly and make my departure...

The full Sheen bit/quotation was from “The Three Surprises You Find in Heaven”.

As a former protestant, if confronted by that simplistic formula, merely point out that belief and contrition are a GREAT start, but that Jesus gave us so much more so that we would not need go it alone, including he never really left us and is present in every church in the world. That we must convert constantly every moment of every day, or risk losing what he offers.

If it is an arguer as to that one time salvation thing, merely ask what happens when someone who gave their life to Jesus then later kills a busload of orphans.

Tom Marcus puts it well above, but I will add some perspective from THE ORTHODOX CHUCH: 455 QUESTIONS AND ANSWERS (by Stanley Harakas). Question 61 deals with the term "Born Again" and notes that "The Bible's use of 'born again' connects it with baptism...To avoid confusing what is accomplished once through baptism and what we need repeatedly in our lives as a constant feature of our lives, we Orthodox don't confuse the term 'born again' for 'repentance'. 'Born again happens at baptism; repentance takes place as a constant 'turning of our mind to God', repeatedly giving ourselves over to God in our lives. When Protestants use the term 'born again' to mean repentance, they in effect make baptism of no significance. This is an abuse of the Biblical phrase."

Fundamentalists reduce salvation to, in effect, a mechanical formula. Just say the magic words and you can never be "lost." Baptism thus is not seen as essential to salvation, something that obviously is incompatible with Catholic teaching.

As a convert, I look back on my Southern Baptist upbringing and laugh at this - to quote you Father, "damnable bullsh*t". I suppose I'm lucky that I was actually baptized, although I'm not certain that is was valid. I asked the priest who confirmed me and heard my first Confession. He responded with a Latin phrase, something about the Church provides where the matter, form or intent may have been lacking. In other words, conditional baptism would have been too much work. But, alas, years later, here I am wondering whether all of it is a bunch of malarkey. Christopher Hitchens made some very good points.

Anon 5:59 - The phrase you heard was probably Ecclesia Supplet, meaning "the Church supplies." (found in canon 144.1) From Canon Law Made Easy: "In factual or legal common error and in positive and probable doubt of law or of fact, the Church supplies (Ecclesia supplet) executive power of governance for both the external and internal forum."

Well, that would take some serious parsing out...

Be that as it may, Ecclesia Supplet cannot apply to an invalid Baptism, yours or anyone else's. The principle can't be used if, say, a lay person attempted to ordain a man a priest, and later on someone tried to say, "Well, Ecclesia Supplet, so now he IS validly ordained."

For me - and this is pretty thick: https://canonlawmadeeasy.com/2020/10/01/ecclesia-supplet-making-invalid-sacraments-valid/