I LIKE OUR PAPAL NUNCIO, HE BEGINS WITH CHRIST NOT WITH FAKE-CHRIST’S LIKE THE IDEOLOGIES OF IDOLATRY WHEN ONE WORSHIPS SOCIAL WORK, VATICAN II, SYNODALITY, ECCLESIOLOGY AND LITURGY 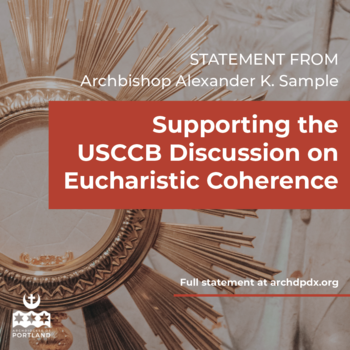 I am not sure how this relates to the most powerful person in the world, no matter who he or she might be, but I like what the papal nuncio says to the USCCB:

Archbishop Pierre highlighted the need for the Church after the pandemic to center its evangelical efforts on the saving work of Christ, pointing out that “Christianity offers more than an NGO or a social service organization.”

“The Church offers salvation in the person of Jesus Christ,” he said.

“What is often lacking in the process of evangelization, and we certainly need to evangelize and catechize now more than ever, is ‘beginning again from Jesus Christ,’’’ said Archbishop Pierre. ’

“The starting point, therefore, cannot be to shame the weak, but to propose the One who can strengthen us to overcome our weaknesses, especially through the sacraments of reconciliation and the Eucharist,” he said.

“With respect to the latter, Holy Communion is not merely a ‘thing’ to be received but Christ Himself, a Person to be encountered.”

A “dead” person (one condemned to the fires of hell due to unforgiven sin) cannot worthily receive the Sacraments meant for the living (alive in Christ due to their sins having been forgiven by Him).

The Sacraments of the dead (dead due to unforgiven sin) are Holy Baptism and the Sacrament of Penance/Reconciliation. In other words, you don’t need to be forgiven (although in Christ forgiveness is present) to receive Baptism or Confession. These are for people in a state of original sin as it concerns the necessity of Baptism for salvation or in a state of unforgiven mortal or even venial sins as it concerns baptism and Penance.

To receive the other Sacraments worthily, one needs to be in a state of grace, meaning they are forgiven of their mortal sins. These Sacraments are Confirmation, Holy Eucharist, Holy Matrimony and Holy Orders. The Sacrament of Holy Unction, I suppose, is a cusp sacrament for both the living and the dead as it entails forgiveness in and of itself or through the Sacrament of Penance associated with some celebrations of it.

Thus, the most powerful person in the world is the President. If he or she is a Catholic and publicly promotes mortal sins such as genocide of pre-born babies and infanticide of those to be born through abortion, even the most heinous crime against the unborn, partial birth abortion or allowing a botched aborted baby still living not to be saved by medical intervention, or even the promotion of the heinous mortal sins of gender ideologies that cry to heaven for vengeance, that most powerful Catholic in the world who knows what he or she is doing is anti-Christ not only opposed to His Church but to Christ Himself, that most powerful person in the world should have a censure placed against him or her by her or his local Archbishop when in Washington and local archbishop or bishop when in their own place of domicile.

This should apply to other super-visible and public person who are far from weak but intentionally use their power to corrupt their Catholic witness.

It doesn’t end there. The COVID vaccine brought to light the use of fetal tissue by the health and pharmaceutical industry. The genetic work in vaccine research then brought genetic engineering into a dim spotlight. The word “Chimera” is being seen in more and more news articles lately. Here are two titles of legislation regarding chimeras that died:

Human-Animal Chimera Prohibition Act of 2016 was referred to the Subcommittee on Crime, Terrorism, Homeland Security, and Investigations on October 11, 2016, but died there

I haven’t heard USCCB discuss Chimeras yet, or the political entities that promote that type of “research.”

I like a former nuncio even better since he is not afraid to take the bull by the horns and admit that Vatican II with its new liturgies are failures:

Of course, he always speaks about Jesus Christ and the Church, but not in this edited interview.

ARCHBISHOP PIERRE THUC, LIKE ARCHBISHOP MARCEL LEFEBVRE AND FATHER LEONARD FEENEY DID NOT ANNOUNCE THAT LG 8 ETC IN VATICAN COUNCIL II WERE NOT LITERAL CASES IN THE PRESENT TIMES AND SO THEY COULD NOT BE IN CONFLICT WITH TRADITION.

Peter Dimond should have told Nick Santosuosso in this video of their debate that there are no literal cases of the baptism of desire (BOD), baptism of blood (BOB) and invincible ignorance(I.I) in our reality so the popes and saints were always referring to the hypothetical and theoretical cases of BOD, BOB and I.I. They could not be practical examples of salvation outside the Church.They must not be seen as exceptions to EENS. There are no such cases in real life.
How could someone saved and in Heaven also be seen on earth at the same time ?This would violate the Principle of Non Contradiction.
But why did not Peter Dimond not say it ? 1) He is interpreting Vatican Council II with the same error. Hypothetical cases of Lg 8, LG 14, LG 16, UR 3, NA 2, GS 22 are non hypothetical for him. So they are practical exceptions to EENS.He then puts the blame on Vatican Council II and rejects the Council.2)Archbishop Pierre Thuc, like Archbishop Marcel Lefebvre and Fr. Leonard Feeney did not state that LG 8 etc were not literal cases and so could not be in conflict with Tradition.3) Neither did they all know that LG 8 etc with interpreted without the false premise does not contradict Tradition (EENS, Syllabus of Errors of Pope Pius IX, Athanasius Creed etc).