A LETTER FROM THE BISHOP OF SAVANNAH, MOST REVEREND STEPHEN PARKES--MY BISHOP 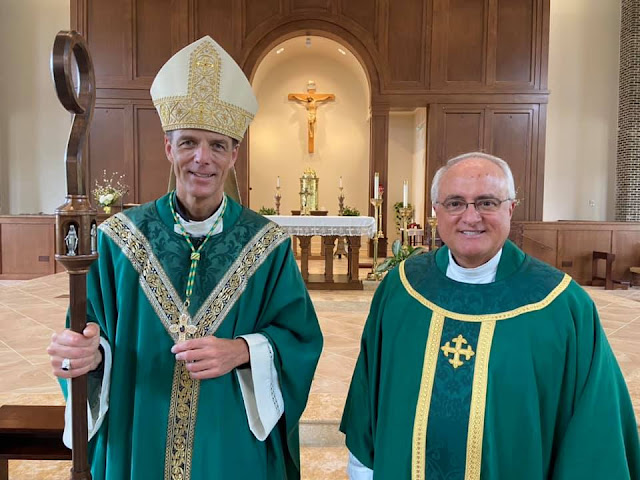 A letter from Bishop Stephen Parkes:
Dear Friends in Christ,
As a body is one though it has many parts, and all the parts of the body, though many, are one body, so also Christ.1 CORINTHIANS 12:12In this issue of the Southern Cross, I hope that you will enjoy learning more about our spiritual family – the Diocese of Savannah.
As the body of Christ we are made up of many parts and are very diverse, but all of our parts are united together as “one, holy, catholic and apostolic Church.” As the Roman Catholic Church, we celebrate our universality but are beautifully knit together around the table of the Lord through our celebration of the Eucharist, which:...is “the source and summit of the Christian life.”
“The other sacraments, and indeed all ecclesiastical ministries and works of the apostolate, are bound up with the Eucharist and are oriented toward it. For in the blessed Eucharist is contained the whole spiritual good of the Church, namely Christ himself, our Pasch.” (Catechism of the Catholic Church, #1324)
The Eucharist draws us into beauty and mystery. One of my favorite quotes about the Eucharist is from St. John Vianney: There is nothing so great as the Eucharist. If God had something more precious, He would have given it to us. As we receive the Eucharist, we become a tabernacle and resting place for the Real Presence of Christ. Our thoughts, words and actions – our witness as Catholic Christians – should reflect the light and love of Christ. Our Church, our world, needs authentic witnesses to bring Christ’s light into darkness, most especially from those who hold public office.
I am deeply concerned about government officials who identify as Catholic but whose views (especially when it comes to the preeminent issue of protecting the child in the womb), are not in accord with the teachings of the Catholic Church. Our shared faith should also be expressed in our public witness.
I ask you to please pray for Catholics who serve in the public square...that they do not compromise the beliefs of our faith but rather show courage in their promotion of life, liberty, and the pursuit of happiness for all persons from conception to natural death.
For those who separate their personal belief from their public witness, may they experience the grace of conversion and make a difference in building a culture of life. Please be assured of my prayers for you, your loved ones and your intentions. I pray that we may be authentic witnesses of our Catholic faith.
Thank you for your prayers for me. May we meet each day in our prayers and as the Body of Christ, may we Rejoice in the Lord always!
In Christ,
Most Reverend Stephen D. Parkes
Bishop of Savannah
Posted by Fr. Allan J. McDonald at Friday, June 25, 2021

For “catholics” in public life who support abortion, it is all about money. The Democrat Party will not financially support pro-life candidates. Moreover they will work actively to unseat pro-life Democrats as they did to Congressman Lipinski in Illinois. Yet “catholic” priests and bishops support this Party. Their obtuseness sickens me

I think the Bishop's letter is a good one, but it falls short when it comes to a resolution. You're left with the question: And? People who agree on things need to find a way to solidly unite and I think that good bishops and clergy should be more courageous in saying that you can't reconcile the promotion of an intrinsic evil and being allowed Holy Communion. There is no logic to an alternative way. Reagan and St. John Paul united to help cripple the Soviet Union. Good bishops could help to do the same in our country that is moving toward authoritarianism/totalitarianism by being unambiguous about the pro-life issue and deliver a good blow to the opposition party which has little to no redeeming value left in it.

I think it a very good start, by simply pointing out that the publically pro-abortion stance is wrong and in need of prayer for conversion.

I think they will be making a major mistake in not also preaching in regard to all our other sins and public stances quite opposed to ALL our teachings. They want coherence then they need to speak/preach in a universally coherent and consistent manner and not just in famous shallow single issue American voting style.

Only in a cohesive and universal application will they have any success. When they do not, they leave liberal media able to lead the narrative.

Focusing on only a single issue rightly leaves them open to an unending stream of "oh yeah? wuddabout"ism, and accusations of injustice in singling out only one group for punishment.

Sophia here: I appreciate the fact that our Bishop is willing to speak publicly against public, sacrilegious, reception of the Most Holy Eucharist. Cardinal Bernardin's "Seamless Garment" metaphor for Catholic Social Teaching' is arguably the single most destructive contribution to the equating of INTRINSIC evils- Abortion up to birth and beyond (after a failed attempt to abort), Physician Assisted Suicide/Euthanasia, Same Sex "marriage", Abortive Fetal Tissue Research, Transgenderism with issues such as Illegal Immigration, the Death Penalty-which is meted out by the State after a trial and conviction (and often multiple appeals) for the most heinous murders, Climate Change (even if you believe it's a crisis). There is absolutely no moral equivalency here. The latter group are classified under the heading of "prudential" because people can differ on how to address them! Cardinal Bernardin himself did try to clarify what he meant-but it was too late. It was already being used to give cover to politicians similar to these, their voters etc. These politicians are simultaneously bragging about their Catholicism while supporting, enacting policies/laws which are most seriously anti- Catholic, anti-Biblical Teaching. Any mortal sin prevents a worthy reception of Holy Communion until after absolution in the Sacrament of Confession, let alone when the mortal sins are so public, so obdurate, so damaging. These policies/laws enable, encourage others to do evil. Not only do Bishops and Priests have the obligation to protect this Holiest of Sacraments but they also have the Pastoral duty to protect the sinner from eating and drinking to their own damnation, to protect the faithful from scandal and to prevent the misinformation of non-Catholics about authentic Catholic Teaching.
Continued

Sophia here:
'But while Catholicism teaches that reasonable people of good will can differ on the prudential solutions to any number of social ills, since the first century the church has recognized abortion as a “moral evil,” complicity in which “constitutes a grave offense” carrying the “canonical penalty of excommunication to this crime against human life.”

In October 2017, Human Life International’s Fr. Shenan Boquet explained the dangers of this “seamless garment” mentality. He wrote that its followers neglect the difference between “acts which are evil by their very nature (intrinsic evils), and therefore always sinful if carried out with knowledge, and more complex social problems,” which are caused by a variety of factors and have debatable solutions. “Instead of helping inform the conscience of their flocks and protect individual souls and the common good from the consequences of such evils,” he warned, seamless garment practitioners “minimize these atrocities by comparing them to other social problems.
Former Philadelphia Archbishop Charles Chaput argues that it “give[s] scandal” for pro-abortion politicians to receive Communion by “creating the impression that the moral laws of the Church are optional … Reception of Communion is not a right but a gift and privilege; and on the subject of ‘rights,’ the believing community has a priority right to the integrity of its belief and practice.”

Despite these longstanding principles, Communion for many pro-abortion politicians, such as Biden and House Speaker Nancy Pelosi, has been allowed to continue in the United States. Most prominently, D.C.’s Cardinal Wilton Gregory has said he would not refuse Communion to Biden.'

It’s good that your bishop is concerned with the Catholic politicians in the previous administration who:
- restarted death sentences against the inviolable dignity of human persons,
- restricted access to healthcare which the church teaches is a human right,
- stole from the poor,
- instructed security forces to “just shoot them” (peaceful protesters),
- obstructed appropriate financial and social relief during a worldwide pandemic emergency,
- was a compulsive liar,
- was a compulsive sexual offender and prolific adulterer,
- prevented asylum seekers fleeing from persecution and war from seeking asylum even though the US had signed international treaties they gave them a legal right to do so,
I could go on but I need to cook my dinner.

The "tiny" difference is that in the current administration the president is a CINA, but the previous president wasn't Catholic and he never presented himself for Holy Communion. Do you understand the difference now? You should focus on the actual problem that exists. BTW the Pope didn't stay silent about his feelings toward the last president, did he? Is this current president beyond reproach? Isn't it wonderful how he supports abortion outside the womb?

Trump's policies were proven better for the poor and minorities, did you know that? You should look at the data and not make baseless claims. Unemployment was way down and per capita income up. How many "asylum seekers" were prevented from legal entry to the USA? Which peaceful protestors are you referring to? Maybe the unarmed lady at the Capital that was gunned down without warning by a yet to be named cop?

"Obstructed relief"? He spent trillions. This is not a hard thing to look up.

Ok Michael A - so I guess you agree with all the other points. As such, I won’t quibble about the last point.