This is very concerning and I fear quite true. From LaCroix:


Cardinal Müller 'bitter and concerned' with Church's direction
The former prefect of the Congregation for the Doctrine of the Faith has requested Church authorities to listen to the “fair complaints” of Pope Francis’ opponents, the Italian daily "Il Corriere della Sera" has reported.
Marie Malzac
November 29, 2017 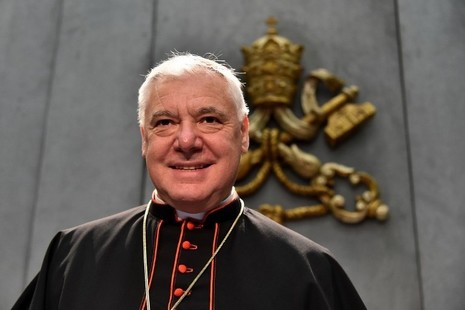 Cardinal Gerhard Ludwig Müller / Alberto PizzolI / AFP
“There is a front made up of traditionalist groups as well as a number of progressives, who would like to see me lead a movement against the pope, but I will never do it."
These were the words of Cardinal Gerhard Ludwig Müller, the former prefect of the Congregation for the Doctrine of the Faith, to Massimo Franco, columnist at the Italian daily Il Corriere dela Sera, in an interview published on Sunday, November 26.
Müller, who has previously distanced himself from a series of pontifical moves, revealed that he was both bitter and concerned with the direction the Church is taking.
Insisting that he believed in “the unity of the Church", Cardinal Müller nevertheless called on Church authorities “to listen to those who have serious questions and fair complaints".
“We must not ignore them or, worse, humiliate them,” he emphasized.
“If not, without intending it, the risk of a slow separation may grow and lead to a schism by a section of the Catholic world that feels disoriented and disappointed," Cardinal Müller warned.
“The history of Martin Luther’s Protestant schism 500 years ago should indicate the kind of mistakes we need to avoid," he said.
Although he had previously harshly criticized his dismissal as the head of the Congregation for the Faith, he revealed several new aspects of this in his Corriere interview.
Pope Francis reportedly said to him that “certain people have told me anonymously that you are my enemy".
“After forty years of service to the Church,” he lamented, “gossips are making such absurd comments, creating doubts in the mind of the pope when they would have done better to visit a psychiatrist.”
Reaffirming his loyalty to Pope Francis, Cardinal Müller claimed that the pontiff’s “real friends are not those who flatter him” but “those who assist him with the truth and with theological and human expertise".
He had severe words for the “detractors” whom he blamed for his departure from the Congregation for the Doctrine of the Faith.
Refuting the notion of a plot against the pope as “an absolute exaggeration", he admitted that significant “tensions” exist in the Church at present.
“I believe that the cardinals who expressed their doubts on Amoris Laetitia or the 62 signatories to a letter making critical comments about the pope, including some which were excessive, should be listened to and not swept aside with the back of the hand as if they were Pharisees or malcontents,” Cardinal Müller said.
What is needed is “free and frank dialogue,” he added.
Instead, he feared that people within the pope’s “magic circle” are “worried primarily about spying on perceived enemies, preventing open and balanced discussion".
In a sign of his good faith, Cardinal Müller recently issued a public defense of Amoris Laetitia, Pope Francis’ Apostolic Exhortation on the family, which has crystallized the various conflicts.
“To classify all Catholics as ‘friends’ or ‘enemies’ of the pope is the greatest evil that they cause to the Church,” Cardinal Müller insisted.
“People are perplexed when they see a well-known journalist, who is also an atheist, claim to be a friend of the pope, while a Catholic bishop and cardinal like me, is defamed as an opponent of the pope.
“I don’t think that these people are in a position to give theology lessons on the primacy of the sovereign pontiff,” he said.
Compared to Benedict XVI’s pontificate, the Church now seems “weaker,” Cardinal Müller continued.
“There are fewer and fewer priests yet we are offering answers that are more organizational, political or diplomatic than theological and spiritual," he said.
“The Church is not a political party based on power struggles. We need to discuss existential issues about life and death, the family, and religious vocations and not always ecclesiastical politics,” he added.
“Pope Francis is popular and that’s a good thing. However, people are no longer receiving the sacraments. And his popularity among those Catholics who enthusiastically quote him, unfortunately, does not change their false convictions,” the cardinal insisted.
It is now necessary to go beyond the notion of a Church as a “country hospital", Cardinal Müller said, citing an expression popularized by Pope Francis.
He said, instead, that the world needs a “Silicon Valley” Church.
“We need to become the Steve Jobs of the faith and transmit a powerful vision in terms of moral and cultural values," the cardinal claimed.
Posted by Fr. Allan J. McDonald at Wednesday, November 29, 2017

The slide started under Paul VI, slowed a tad under John Paul II and Benedict XVI, but now it's a race under the bottom with the "Most fluffiest Pope Evah!"

How can Cardinal Mueler be expected to respond to anonymous accusers? It has been my personal frame of reference that Pope Francis has a world view shaped by the horrors of the Argentine social and political wars of his younger years. It appears he either didn’t learn from them or learned exactly the wrong things.

"This is very concerning and I fear quite true."

Which part of the interview are you referring to? Is there something new in it?

The main value of this interview is its evidence that the worriers among us are not crazy. The problems with this pope, bless his heart, are real, and cardinals are saying so.

I would like to believe that "this too shall pass" but the gerrymandering of the College of Cardinals to ensure this Pontiff's fluffy legacy is not helpful. Obviously the Holy Father, like any Jesuit Superior, demands total obedience. No questions asked.

Some thoughts given the number of topics considered within this piece:

"Pope Francis reportedly said to him that “certain people have told me anonymously that you are my enemy"."

It would be naive to think this doesn't happen in every organization of size but, it still sounds sick to hear it in ours.

"What is needed is “free and frank dialogue,” he added."

I couldn't agree more. The conversation has been one way for 4 years now.

"Instead, he feared that people within the pope’s “magic circle” are “worried primarily about spying on perceived enemies, preventing open and balanced discussion"."

“To classify all Catholics as ‘friends’ or ‘enemies’ of the pope is the greatest evil that they cause to the Church,” Cardinal Müller insisted.

Sometimes, in life, you have to choose sides when truth and integrity is on the line.

I'm entitled to my opinion which is, it certainly feels that way. Careening toward becoming an NGO.

“There are fewer and fewer priests yet we are offering answers that are more organizational, political or diplomatic than theological and spiritual," he said.

Can't argue with this. Individuals "get it" - the organization hasn't yet and, probably won't embrace it. I can hear them saying, "There's no problem here". Fr. Z is right, the liturgy will save us and until we commit to the liturgy, well, here we are.

“Pope Francis is popular and that’s a good thing. However, people are no longer receiving the sacraments.

Cult of man, perhaps? That's very Protestant. If people truly respected the institution and loved our Lord, the sacraments would be paramount and the current steward of the Chair would be secondary.

And his popularity among those Catholics who enthusiastically quote him, unfortunately, does not change their false convictions,” the cardinal insisted.

“We need to become the Steve Jobs of the faith and transmit a powerful vision in terms of moral and cultural values," the cardinal claimed.

If we let the Church be the Church and the Liturgy be the Liturgy, I think this would do wonders for faith, morals and dedication. Pop culture type figures will do little to 're-orient' things in the long run.

Much of this reminds me of a conversation I was having with a roman priest friend of mine. Every single problem within the church of Rome can be summarised as the inability of Rome to nip problems in the bud, or put another way, the lack of ability to govern its own house. Of course this isn't just referring to the present times, it's also referring to past times, when the filioque was added to the creed without an ecumenical council of the Church as a whole, the abuses that were happening during Luther's time, or dealing with dissident theologians, liturgical abuses or female altar boys to the present day....The day discipline is restored to the church of Rome...is when things will turn.

A threat was made against me at my Russian Orthodox parish against my person, where a person thought he had the authority to call the police on my presence at the local parish. He was forced to apologize immediately, before I even brought up the incident to the priest....phyletism that this particular parishioner had was dealt with quickly and without me even bringing it up. I reckon to think that if this happened in a Roman parish that it would not have been dealt with so quickly.

As someone with Slavic roots, it saddens me greatly (and, I'm also a bit ashamed) to hear the story you related. First, and obviously, because it shouldn't have happened. We should be well beyond the days where it matters so greatly from where one's ancestors came which would then dictate where you worship, from where your potential bride should come, what funeral home you use and so on and so on (e.g. insular 'old neighborhood' kind of attitudes). All that should matter is that you are an Eastern Christian and you should be embraced as such. Case closed. Second, I don't know of what jurisdiction you are part but, many within the U.S. now label themselves as 'Pan-Orthodox'. My point, for general survival which is becoming a problem for many parishes, traditions from the 'old country' like Church Slavonic, chant and holiday foods like Paska Bread (Easter Bread), Orechovnik (Nut Roll) and Hrudka (Easter Cheese), among others should be preserved but, if the figurative 'tent' isn't large enough for all who seek God's mercy to gather within, when the older generation passes, there won't be many (or, in some places none) to take their place. Relatives of mine who have long since past were members of the American Carpatho-Russian Orthodox Diocese (ACROD) and while the aforementioned traditions are well preserved, among others, there is a view to be accepting of all who seek the true faith!

To your other point, unfortunately, I would have to agree. The attitude within many Roman communities would be to avoid confrontation, get along, don't make waves, let it be etc. This approach doesn't strengthen the community when the actions of one such as the person you described is disruptive to the point that they have basically separated themselves from the community at a micro level and the church at a macro level.

While there are those who might consider leaving for another parish or, would stop going altogether, my sense from reading your comments over the last few years is that your formation is strong to the point where one disagreeable individual won't distract you from the true faith and the salvation it provides.

Joe, I question whether someone would have even made a threat to you at a Catholic parish. Maybe that's a difference to be considered as well?

I 100% agree with you, I am fortunate that the vast majority at my parish embrace me, and have welcomed me rather peacefully. One person does not speak for all, not would I ever let that one person dictate such. (My best friend is Belarussian and Russian),

Anon, far worse things have happened to me in Roman Catholic circles...