LET ME BANG THIS DRUM AGAIN! WHEN WILL THE NETWORK NEWS STATIONS, BOTH BROADCAST AND CABLE DEAL WITH THE ELEPHANT IN THE ROOM AS IT CONCERNS THE DEGRADTION OF OUR SOCIETY AND CULTURE CARRIED OUT ALMOST SINGLEHANDEDLY BY THE ENTERTAINMENT INDUSTRY WHICH OWNS THE NETWORK NEWS? 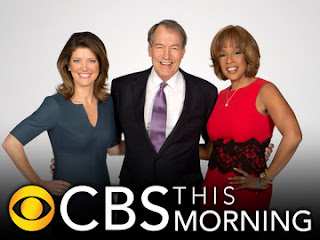 I watched the opening of the CBS Morning News on the day after Charlie Rose, one of its main anchors was suspended due to allegations of sexual harassment and inappropriate behavior with women who worked for him.

Nora O'Donnell and Gayle King, his co-anchors spoke of their pain over the revelations but the necessity to deal with the systemic problems of sexual harassment.

So far so good. But what I haven't heard from them or anyone else reporting on this breaking flood of news, which so much reminds me of the flood of allegations against so many priests some of which went back 50, 60 and 70 years, is the elephant in the room of these network news stations.

It is Hollywood and how they have single-handedly corrupted the morals of this society which corrupts minors who watch it and corrupts already disordered individuals to imitate so-called art.

Just who writes these shows, produces them, directs them and then orders them to be placed on the television networks and early in the evening as though later doesn't matter?

Is there a link between the graphic violence on television, like the Walking Dead, abortion on demand, and the like and the very real acts of violence we have seen lately in Las Vegas and Texas not to mention numerous other places and the slaughter of millions of innocent children by legalized abortion?

Is there a link between the degradation of women brought on by Hugh Hefner and the glorification of Playboy, Victoria Secrets and their advertisement and shows and the like.

Is the death of Hugh Hefner a sign of the times of the impending  death of the media industries' degradation of our culture of which sexual harassment is but a small symptom.

When will this be reported, analyzed and talked to death by the talking heads on TV news, like Nora O'Donnell, Gayle King, and CNN, Fox and MSNBC to mention just a few?

"It is Hollywood and how they have single-handedly corrupted the morals of this society which corrupts minors who watch it and corrupts already disordered individuals to imitate so-called art."

Where are the parents?

"Is the death of Hugh Hefner a sign of the times of the impending death of the media industries' degradation of our culture of which sexual harassment is but a small symptom."

No. Hugh Hefner died from Cardiac arrest. It is a "sign" that he was 91 years old.

Our priests regularly mention during their sermons the need to avoid television. They give good example because it is one of the rules of the SSPX that televisions are prohibited in the priories. The parish's academy handbook strongly discourages parents from allowing children to watch television or other media.

So, in this instance, I agree with Fr. Kavanaugh. Parents have the responsibility.

Yes, the SSPX holds sway over its clergy and the clergy of this group can't force but may recommend to parents not to have televisions. There was a time when the Irish clergy in this country, borrowing from Irish Catholicism, made Catholics take a "pledge" not to drink. I experienced it in Augusta in the early 1960's. We were all asked to stand, raise our right hands and "pledge" we wouldn't drink. My older brother didn't raise his hand though!

But the point is, that sometimes we need government censorship of things that are deleterious to the common good as was experienced in the movie industry from about 1933 until Hugh Hefner's sexual revolution brought it all down around 1960 and Hollywood had the repression of religion in what they produced cast off.

"Television" need not be avoided - this is an overreaction. There's plenty to watch and enjoy with no threat to conscience or morals.

If the SSPX choose to prohibit TV sets in their houses, that's all well and good. But it is not necessarily an example that anyone else needs to follow.

The culturally abstaining Christian's children are indoctrinated in schools and liberal Christian churches where relativism, i.e.: evolving doctrine theories, rule the day. We have AL to weaken the orthodox Catholic and America magazine to weaken the confused and confuse the poorly catechized. It is not just Hollywood, the doctrinally weak and ideologically nimble Catholic hierarchy does well indeed.

Pro-abortion politicians are honored with invitation to speak at Catholic church organizations and schools. The Holy Father will not answers yes or no five simple questions to strengthen Catholics in the faith. Who is playing into the hands of the cultural elite who have no use for Christian dogma or Christian ethics?

TV really is garbage. It is a huge propaganda medium for the Left, as well, which is probably why Kavanaugh wants us to keep watching it.

Yes, all those episodes of JEOPARDY and Antiques Roadshow and Aerial America and the BritComs - they're just so much Left Propaganda.....

You know, the FINAL JEOPARDY a few nights ago actually - ACTUALLY - asked the contestants to name a state capital that began with the last four letters of the state's name ! ! !

Kavanaugh, even some of the shows which should be non-ideological manage to get in "man made global warming" and their slavish love of gay marriage. Ever watch House Hunters or Love it or List It? What do think think is going on with the NFL?

It is unsurprising to me that Kavanaugh has time to watch television and sees no problem with others doing so.

I can highly recommend anyone to read a little about the thoughts and theories of the late Neil Portman concerning TV.

For example, read a summary of his thoughts on TV as expressed in the classic " Amusing ourselves to Death. "

Neil Postman, that is.

TJM, you can add commercials to your list as well. Sometimes they are even more subtle. Oftentimes they are a near occasion of sin.

I read Postman's "The Disappearance of Childhood" in college.

His core message was that an immersion in media environment shaped children's lives to their detriment, and society's.

He asserted that TV conflated what should be the separate worlds if children and adults.
It did so by steeping the minds of children in vast amounts of information once reserved for their elders and subjecting them to all the desires and conflicts of the adult world.
If all the secrets of adulthood, including sex, illness and death, are open to children cynicism, apathy or arrogance replace curiosity for them, short-circuiting education and moral development.

Maybe, the SSPX are on to something?

They are Catholic; even the HF says so. Discerning Catholics.

"The head of the Roman Catholic Church has told an Argentinian newspaper that he has not watched television since July 15, 1990.

The pontiff told La Voz del Pueblo that the resolve not to watch TV, which he made to the Virgin Mary..."

Once upon a time, American entertainment offered the following:

That's true in so far as the choice is ours whether to watch a movie, or T.V. show.

But it's not entirely true that no one is "corrupted" by a movie they don't watch. Because perhaps it's not so immediately apparent to you, but trying to live in a culture where a good portion of the people, including extended family members, are watching those movies, or T.V. shows, or reading those books, or listening to that music, and are being corrupted by them, exposes us to those corruptions even if we have avoided them.

The things people, acquaintances as well as family members, do and say, the values they absorb and begin to project, and the disagreements that arise from that, cause many people, for the sake a harmony, to accept things they should not accept.

Isn't that being in the path of corruption, even if you haven't watched those shows or T.V. or read those books or listened to that music yourself?

I am relatively certain early Christians faced the same dilemma with their still pagan or Jewish relatives, so it's just a fact of life.

I may not watch or read or listen to this garbage myself, but I still live in the dump with it.

Even the History Channel is crap...they started doing shows on ghosts, aliens, alternate history, and their revisionist nonsense is sometimes unbearable. Ads are the worst and Disney is completely of the Devil and children should not be allowed to watch that globalist trash run by a cabal of homosexuals.

"Our priests and presidents, our surgeons and lawyers, our educators and newscasters need worry less about satisfying the demands of their discipline than the demands of good showmanship."

Networks and movie studios can't sell the public anything that they don't want. They chase profits, which means chasing the public's tastes and mores. And every year, noble, high-minded, wholesome entertainment crashes and burns, because it's a tough sell for the general public. Unless you hate the capitalist system, you can't blame corporations for chasing the lowest common denominator. It's what their stockholders expect. The CEOs who refused to do it flop and get replaced by ones who do.

"No one ever went broke underestimating the bad taste of the American Public." H.L. Mencken