WOULD THIS HAPPEN PRIOR TO VATICAN II?

The loss of reverence at the Ordinary Form Mass and not just papal Masses! But, this spectacle of priests and bishops, with one yawning in the background says it all when it comes to the loss of Catholic reverence in the modern form of the Mass!

Pope Francis in His Holiness' Wednesday audiences on the Mass would do well to take Sacrosanctum Concilium line by line and show how the manufacturers of the modern Mass and those who implemented it from the very top down missed the mark completely!

The loss of reverence accelerated in the 1970's!

This simply would not happen at an EF Mass! 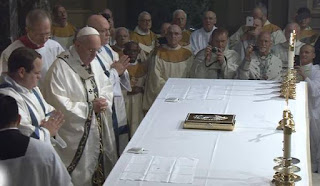 Of course! How silly of us not to recognize that the EF prevents, among other things, yawning......

There is absolutely no evidence whatsoever that anyone ever yawned during Mass prior to the reforms of the Second Vatican Council. Sneezed occasionally? Yes. Yawned? No!

Most yawning at an OF Mass reflects boredom. An EF Mass is not boring. Attending an EF Mass every Sunday since Summorum Pontificum, I've not noticed a single person yawning (though lots of babies sleeping, but more loudly "attentive").

But seriously, a priest yawning while "concelebrating" Mass? C'mon ... What kind of priest is that? What kind of Mass?

If it weren't in a liturgical setting, that picture above would remind one of an Old Boy's Club meeting. Novus Ordo concelebrations facing the people look creepy if not sinister.

There is no evidence whatsoever of anyone using a cellphone prior to Vatican II. This may come as a surprise to a lot of young people who cannot imagine life without one (or an I-phone or I-pad, or whatever the latest gizmology is called).

Not long ago a woman in late middle age elbowed me out of her way during Mass at the Oxford Oratory so that she could take a picture. I could excuse her since she was clearly a foreign visitor (quite possibly Italian).

More precisely, Victor, it looks like a photo taken at a Masonic lodge. For instance, click here for a picture of the altar in an actual lodge. Think the resemblance is coincidental? Where do you think the butcher-block altar came from?

Henry:
Rumours have it that the man in charge of the post-V2 liturgical reforms, Msgr Bugnini, was a Mason because his name was found on a membership list for an Italian Masonic lodge, (along with some Cardinals).

Whenever I read or hear the expression “rumor has it” or “it is rumored” and such, my “fake news” antennae are activated and I detect a whiff of “conspiracy theory.” And so I then undertake some research into the matter.

Would someone please provide evidence that Archbishop Bugnini was a Freemason and in doing so please answer the points made in the following evaluation of the “rumors”:

Anonymous 2, I could care less if Bugnini was a freemason or a boy scout, he was a cunning, evil man, hell bent on destroying the Roman Mass, and he succeeded! Attendance has plummeted and if Santita had a clue, he would work hard to undo the evil Bugnini's work instead of sticking with a failed product. The definition of insanity is doing the same thing over and over and expecting different results

Had he been so, he would have been excommunicated latae sententiae, and we would be in the position that the main architect of the liturgical reform was excommunicate when he engineered it.

Bouyer described him as 'that Neapolitan scoundrel ... as bereft of culture as he was of basic honesty'.

However, we have to look to the organ-grinder and not his monkey, and the organ-grinder was Paul VI. There is evidence that in the last tortured years of his life he acknowledged the damage that had been done, and his responsibility for it. He would not have been unaware that the Church to which he had devoted his life (he was born in the year of Queen Victoria's Diamond Jubilee in 1897) was collapsing about his ears.

And yet again you fail to address the point in my post except to say that you couldn’t care less about it. This being the case, your post is irrelevant to my point. It is another example of your Trumpian/Putinesque tactic of distraction.

You should address your comment to Victor, who does seem very much to care whether Bugnini was a Freemason, and to Henry, who seems to care that Bugnini may at least have been influenced my Freemasonry if not indeed a Mason himself.

Whether or not Bugnini was personally a Freemason is unimportant. I don't know or care whether or not he was, nor whether any secret Masonic machinations played a role (similarly unimportant). But to one with sufficient knowledge of history, it's apparent that the same goal that Freemasons advanced--religion that centered on Man rather than God--fueled the Vatican II revolution as it had previous revolutions, from the Protestant reformation to the Communist revolution, both of which in turn fed in Vatican II.

You clearly suggested (with a photo to boot) that the “butcher block” altar design was consciously modeled on the altar in a Masonic lodge.

And, indeed, its versus populum use was probably the single most significant step toward "goal that Freemasons advanced--religion that centered on Man rather than God". Of course, the idea of a table instead of a true altar goes back at least five centuries, and has been common to all who sought to de-sacralize the liturgy--from protestants to pre-Vatican II Masons to contemporary liturgists.