GIVING DIOCESAN AND PAPAL AWARDS TO THE LAITY 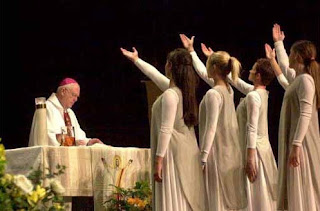 Usually when diocesan and papal awards are given to the laity, the criteria is based upon what they do in the churchy realm of the institutional Church.

Of course practicing Catholics should be the ones considered. But what does this mean?

I think it means following the precepts of the Church, not necessarily being involved in all the churchy things of the parish. Thus a Catholic who simply attends Mass each and every Sunday and Holy Day of Obligation, goes to Confession at least once a year, makes their "Easter Duty" (google that!) and financially supports their parish and diocese are the ones to be considered but also to include the following:

An excellent parent, sibling who makes the home the Church in Miniature.

The Catholic Politicians who actually upholds the teachings of the Church in the all the hot-button political controversies of the day and to the point of a white martyrdom.

In other words, excellent candidates for diocesan and papal awards aren't those who have been cooked in the crock pot of being clericalized by their priests and parishes (I am not condemning laity who take churchy roles here) but Catholics who bring their Catholic Faith to the world to serve the poor, marginalized and uphold all that the Catholic Church believes, teaches and practices to be revealed by God.
Posted by Fr. Allan J. McDonald at Saturday, November 18, 2017

I want a church award. How much does it cost?

Only the purchase of you soul!