POPULARITY POLLS AND THE POPES, WHAT DO THEY TELL US? 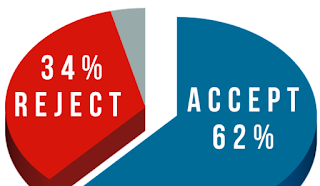 John Allen of Crux has an interesting article on papal popularity, polls and popes.

It seems to me if a pope is popular by worldly standards, then that pope is worldly or people appreciate his tenacity and convictions especially, though, they may appreciate his celebrity-like personality that is attractive.

Pope John Paul II was a conservative pope, although progressive in some things, but he had a great personalty that drew people to himself--thus he gets high ratings in terms of popularity.

Pope Benedict is an introvert and book worm and likes music and such. He also upheld what the Church teaches and called the Church back to its pre-Vatican II roots. This is not popular with the world at all!

Pope Francis has a peculiar Italian personality which is fascinating but very much unlike Pope John Paul's appeal in terms of personality. His popularity seems to be that His Holiness doesn't uphold the Catholic Faith and wants to change it to make it more appealing to the world, more worldly.  He comes across as a "buddy" pope. Even my Italian relatives in Italy who don't practice the faith say that he's someone they would feel comfortable inviting to their home for Cena!

Here’s what Gallup data show, measuring attitudes among all Americans, Catholic and not. Results are expressed in terms of the percentage of Americans who hold a favorable view of the pope:

Pope John Paul II
Pope Benedict XVI
Pope Francis
Traditional Catholics are always going to give the pope high ratings and this is as it should be out of respect for the office. Liberal Catholics and pseudo-traditional/conservative Catholics are less likely to offer the same respect to the person and office of the Papacy.

Thus Pope Benedict's popularity or lack thereof is from liberal Catholics who don't like orthodoxy it seems to me.  Whereas liberal Catholics love it when their ideologies are being met by a priest, bishop, cardinal or pope.

Pope St. John Paul II is different. His charismatic personality and ability to be a witness to suffering gained him admiration from all kinds of Catholics even if they disliked his orthodoxy.

The bottom line for me and this is it is that a pope must be orthodox in season and out of season and not rely on popularity to guide the Church!
Posted by Fr. Allan J. McDonald at Tuesday, November 07, 2017