IN THESE OF SIMILAR WORDS! O LORD, SPARE US! 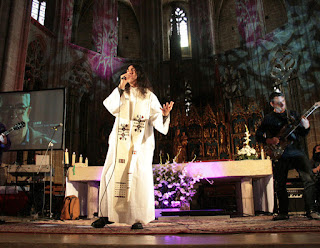 The new papal nuncio to the USA gave a talk a few days ago spoke on Pope Francis' concept of synodality which is based upon subsidiarity. He said things should be delegated to bishops' conferences, local bishops themselves and then this bombshell, priests and pastoral councils.

Let's just take one issue where in the immediate aftermath of the vernacular Mass, priests took to heart with a vengeance this synodality or subsidiarity and started to use their own words for the Mass and even make up Eucharistic Prayers all in the name of the Spirit of Vatican II.

Yes, in the early Church, priests did this precisely. They knew the structure of the Eucharistic Prayer but could use their own words and ad lib according to a rough outline.

I was taught this in the 1970's seminary! I experienced it from the priest theologians who taught us and celebrated Mass and yes, we were encouraged to do it, make it up as we go to make it personal not only to the priest but the congregation too.

I fear, as with so much Pope Francis is doing, that we are being brought back to the heady days of the immediate aftermath of Vatican II and allowing every stupid thing to be repeated as we approach the 2020's of the 21st century.

And yes, within the first few months of my priesthood,(the flexible, non rigid, non doctor of the law and rubrics that I am)  I celebrated a small group- outdoor, picnic Mass without vestments and wearing secular clothes and without a Roman Missal and only secular bread and wine and I made up the Eucharistic Prayer according to a structure of Eucharistic Prayer II. I knew then I was preparing this little congregation for the 2020's! (Of course I am a repentant flaming liberal and have no intention of going backwards again to the 1970's!)
Posted by Fr. Allan J. McDonald at Sunday, November 05, 2017

Sorry, it's all bollocks. I would not recognize it as a Mass, would not be in the least degree inclined to regard it as valid, and were I to attend it, it would be with the intention of disrupting it, if necessary with water cannon and tear gas.

But then, what's the point? They can all choose their own route to hell, which is paved with parsons' skulls and good intentions.

Today our priest at the EF Mass spoke about justice. The reading was the one where the Pharisees try to trap Jesus by asking him whether taxes should be paid to the Romans. It's the "render unto Caesar what is Caesar's, and to God what is God's" scripture.

Our priest said (among other things) that our obligation to attend Mass on Sundays and Holy Days of obligation is a matter of justice, and that by doing so we give what we owe to God, that is homage, worship and adoration, and we thereby keep the Third Commandment, keep Holy the sabbath.

Somehow, Mass Lite, with priests winging it with groovy made up Eucharistic Prayers and a bag of pita bread and bottle of Beringer red wine, in festive casual "just us" style doesn't seem to meet the obligation. Hard to conceive of adoring and worshiping and giving homage to God when the Mass is cast as a casual meeting with pals.

The big difference between now and then Father is that today it's not possible to keep the fantasy going that somehow an ecumenical council, or the pope, or someone at the top wants the Mass to become this free for all, and the same goes for the fantasy that these radical deviations will bring people back to the church. We'll also have Summorum Pontificum which means that the traditions of the church will be there haunting these radicals like a specter.

I wouldn't be surprised if even the Praytellers realize this, and that is why they can't even bring themselves to admit that Francis supports Benedict's hermeneutic of continuity, or to actually discuss what he says about the liturgy even after almost 5 years. There is nothing more ridiculous than Anthony Ruff stating that "Vatican II demands X" and that people who disagree with X are against Vatican II, but then not being able to point to council documents, nor to post-conciliar magisterial documents that teach X and shutting down discussion when someone points this out. In the 70s you could get away with this when there was no immediate access to texts like this, today it just looks ridiculous.

So, then would it be possible for a conservative pastor and parish council to replace the Novus Ordo order of the Mass with the ordinary from the post-Vatican II missal of 1965?

If synodality is on the congregational level too, why the heck not?