THIS IS WHAT RORATE CAEILI IS REPORTING, WHICH I THINK REPORTS ACCURATELY WHAT THE FACTS ARE. BUT IS THERE A MESSAGE IN THIS?

Surprising liberals and the social justice wing of the American Church at today's U.S. Conference of Catholic Bishops general assembly, Archbishop Joseph Naumann beat Cardinal Blase Cupich in an election for the chairmanship of the committee on pro-life activities. 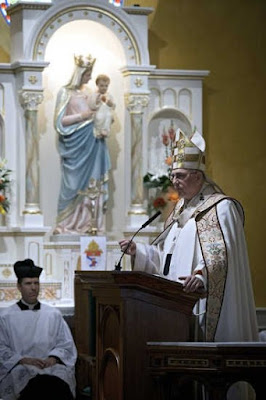 Cardinal Cupich, who many on the left had hoped would reshape the pro-life office of the USCCB in the style of his Chicago predecessor Joseph Cardinal Bernardin, lost the election 54 percent to 46 percent.  This means 82 bishops voted for Cupich, with 96 bishops supporting Naumann.
Posted by Fr. Allan J. McDonald at Tuesday, November 14, 2017

Cardinal Cupich is a left-wing loon and probably the worst appointment Francis could have made. Wherever he has been, most of his priests find him cold, distant, and not a good leader. He is a double-knit dinosaur hopelessly mired in the 1960s and 1970s

So says the blog owner.

TJM says, "Cardinal Cupich is a left-wing loon and probably the worst appointment Francis could have made."

Name-calling twice in one sentence, yet he is not deleted.

The disclaimer is balderdash.

I don't think there is a message in this.

As an aside, the picture you've posted was taken at the FSSP parish here in Kansas City. I understand that the bishop over there is quite supportive of the FSSP's apostolate in his diocese.

Anonymous at 3:07, perhaps you should start your own blog where you can enforce whatever rules you like to your heart's content.

Notice how the anti-Trump or Republican remarks by so-called liberals frequently makes its way here? Have a problem with that or are you just grandstanding?

Even the collective bunch of bishops get a vote right once in a while.

Is anyone else shocked that 82 U.S. Catholic bishops do not meaningfully oppose abortion?

Anon@3:07, There is only one name-calling and that is "left-wing loon' which, however, is accurate. To say he is the worst appointment is not name calling, rather a statement of fact.

Henry, no. But I'm shocked that you're shocked!


Bishop Kevin Rhoades, of Fort Wayne-South Bend, Ind.,a conservative who is also outspoken on abortion, was elected chairman of the Committee on Doctrine.

"Anonymous at 3:07, perhaps you should start your own blog where you can enforce whatever rules you like to your heart's content."

Hey, if you run the blog and you state "no name-calling" then you allow folks to call names.... well, where's the integrity in that?

The previous two popes did a poor job overall appointing bishops, presumably because neither behaved in a dictatorial manner, maintaining instead a genuine respect for pastoral diversity. The present situation proves they made a mistake. The next truly Catholic pope needs to get things in order, even if that means driving out the troublemakers.

Anonymous @ 6:21, the rules on most blogs are guidelines, with the blog owner exercising some discretion. One does not want to completely sterilize the blog with too stringent enforcement. Besides, I am sure blog owners understand that other members may be allowed some leeway with regard to certain difficult or contentious members. So stop your whining, you sissy.

This is not a "guideline." It is a clear statement of intent. That the blog owner chooses to ignore his own words is evidence of a lack of integrity.

Anonymous@ 11:29, Statements of intent are not always on target. In fact, "the road to Hell is paved with good intentions." However, in the case of Leftists, faux Catholics, and other detritus, there is a loop that brings one back to the road of good intentions after an understandable digression. And, if you are a supporter of Cupich and call yourself a Catholic, you are the one with problems with integrity, Fellator of Baboons.

...."The disclaimer is balderdash."

Anonymous, if I were you, I would just stop visiting such a offensive blog. After all, rules are rules.

Nah, I think I'll hang around for the entertainment value.

Kavanaugh at 5:21 PM, we understand, you get your jollies this way. Sad. Continue to support your Party which promotes aborting more babies and selling their body parts.