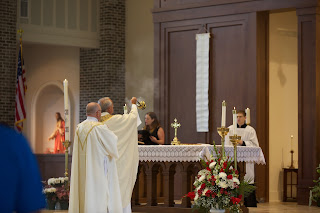 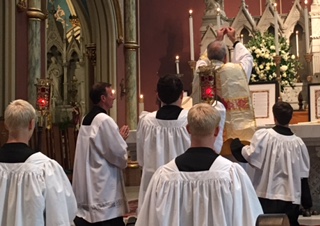 How much of a demand there is for such a Mass, I don't know---being raised mostly after Vatican 2, I can't say I am discontented with OF, or most people I know for that matter.

In my previous parish and now in this parish, I don't know of any real discontent with the Ordinary Form of the Mass apart from the style of music that is selected. Usually I hear people who want us to be more upbeat and like the non-denominationals, not more traditional like the EF Mass!

The question of Catholics who no longer attend Mass is not easy to answer. Did they leave over the Mass or the sex abuse scandal and the implied hypocrisy of bishops and priests in this regard.

Did they leave over our strict teachings on sexual morality, only men ordained as priests and our politics as it regards contraception, same sex marriage and abortion?

Did they leave the Catholic Church for better community and feel good religion and relevancy?

Did they leave the Catholic Church because their new religion offers more opportunity for service?

How many leave the Catholic Church due to a percieved lack of reverence in the Ordinary Form, the lack of a silent canon, no kneeling for Holy Communion, altar girls, Eucharistic ministers, lectors and the like?
Very few I think.
Posted by Fr. Allan J. McDonald at Thursday, November 16, 2017

Ask the wrong question . . . and get a wrong answer.

The right question is not what kind of Mass the predominantly protestantized congregations now attending Mass want. No surprise that they're probably satisfied with the protestantized Mass that made them that way.

It's what kind of Mass will begin to change these "Protestants who attend Sunday Mass" into faithful believing and worshiping Catholics.

Fr. McDonald, I know that you're interested in different liturgies, so I thought you might find this interesting: Russian Orthodox Church Outside of Russia- Western Rite: Ordinary of the Sarum Liturgy.

Bingo! Maybe Santita will one day wake up and employ his dictatorial style to some good - restore the EF as the normative Sunday Mass and consign the OF to 3 in the Afternoon or 6 in the morning or at a designated parish for those who wish to attend the OF.

Oh golly---I noticed the blue lines in this post were something I said (one of your bloggers from 30327, within hearing distance of Interstate 75 about 250 miles to the northwest of Bryan County). Must have stirred up the hornet's nest.....of course I write from a post of hardship, a city that voted 81 percent for Hillary Clinton last year (Trump's percentage in Atlanta equaled the number of the interstate that connects Macon and Savannah).

When the Archdiocese of Atlanta was formed in 1962, there were about 30,000 Catholics in north Georgia---right before the big liturgical changes of Vatican 2. Maybe 40,000 in 1965 when the liturgical changes began to take root. Now, 50+ years later, estimated 1 million in the area. Lots of parishes here with over 5,000 members. All this in an "OF era". And dozens of seminarians these days *yes, even with few parishes offering an EF Mass). Not aware of anyone up here who has told me "well, I'd like to join the Catholic Church, but...not as long as you have an OF Mass."

I suspect a lot of Catholics left over moral issues (birth control especially), some maybe angered about priestly ordination limited to men. A lot of them became Episcopalians I suspect.

But I agree that we should not mock either form. There is room for both. Anglicans have several rites for their communion services, and the Eastern Orthodox doubtless do too---so why should we in the West have just one primary form? There are things I like about both rites---one thing like in OF is communion (usually) in both species, and Mass (mostly) in the vernacular. With the EF Mass. I like the more formal vestments and a back altar. Maybe we could have a third rite using features of both...

AS for TJM suggestion of OF at 6 in the morning or 3 in the afternoon---no thanks! That is about as likely as my seemingly forever congressman, ultraliberal John Lewis, losing at the polls. Hasn't come close to happening in his 31 (too long) years in office.

When Catholics lapse they do not, as a rule, join another denomination. They just stop going to church. They then marry outside the Church and don't bother to get their children baptized or brought up in the Faith.

Those who lapsed (or became irregular attenders) on account of liturgical changes or Humanae Vitae did so decades ago. Dislike of the 'new Mass' did not imply loss of faith; quite the opposite in fact. Deciding to ignore HV may have led to wider dissent from Catholic moral teaching although it impossible to generalize.

When a 2000-year-old institution, which claims supernatural authority and is rightly regarded as the mainstay of Western civilization, decides to transform itself almost overnight into an organization in which few things are certain anymore, it can hardly avoid precipitating a crisis. The seeds sown in the 1960s bore fruit in the 1970s.

What made thousands of priests abandon their ministry and contract marriages which are objectively invalid, since Holy Orders are a diriment impediment to matrimony? Why did the Jesuits, once rock solid, embrace heresy? How does one account for the loss of vocations to the priesthood and religious life?

It's hardly surprising, given the background of the last half-century, that the 'pilgrim people' took the Latin 'peregrinus' literally and wandered off. The crisis of confidence gets worse. Benedict XVI identified the problem but left it for someone else to sort out. His successor has managed to set bishop against bishop and cardinal against cardinal in what looks like a deliberate strategy. The atmosphere in the Vatican has been described as 'toxic' by insiders, with a culture of bullying and intimidation spreading downwards.

Acute observers in the 1960s, both Catholic and non-Catholic, questioned the wisdom of entrusting the barque of Peter to the shifting sands of modern relativism. I would submit that their gloomy prognostications have been proved correct. As for liturgy, what happens in your average Anglican Church differs little from what goes on in your average Catholic one, and both denominations are declining in tandem.

Mr Nolan:
I do not think the barque was entrusted to these shifting sands of modern relativism, but rather, there was a successful underhanded effort at deception that did so. The modernists who were still in hiding until WWII were able to greatly influence the outcome of the Council, and, of course, took over the realisation of the Council's mandates thereafter.