NO PRIEST, BISHOP OR POPE IS EVER DISTRACTED BY THE ANTICS OF THE CONGREGATION WHEN CELEBRATING MASS IN THIS DIRECTION! 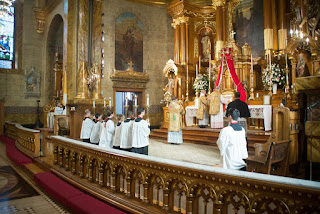 The pope said this morning that His Holiness is distracted during the Mass when he sees the faithful, to include priests and bishops (I am guilty too) at His Holiness Masses, taking pictures throughout the Mass. 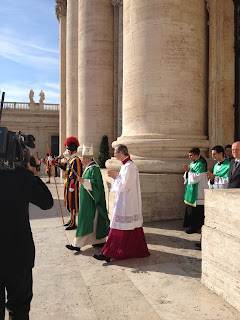 Duh! I am distracted when I see people get up during the consecration and elevations to go to the bathroom or do other distracting things as I am praying. Why am I distracted? Because I can see what is going on since I am facing the the congregation.

But when I celebrate the EF Mass or the OF Mass ad orientem, none of that is a distraction to me whatsoever!

This is what the pope just said to justify ad orientem!

Lift up your hearts not your cellphones

And furthering his comments on how, too often, the Mass is lived in a superficial way, Pope Francis remarked on the fact that the priest who celebrates says “Lift up your hearts” not “Lift up your cellphones  to take a photo!”

“This is a bad thing” he said, “It makes me very sad when I celebrate Mass here in the Square or in the Basilica and I see many cellphones raised. And it’s not only the faithful, but also many priests and bishops. Please! Mass is not a show!” 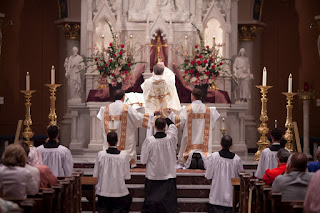 Francis finally says something I agree with. A definitive statement, wow. Finally, a posting where we won't go around in childish circles with some being both corrected and unfairly admonished for being narrow minded, hateful and my recent favorite, evil.

"A central theme that the Council Fathers underlined is the liturgical formation of the faithful, indispensable for a true renewal. And this is precisely the aim of this cycle of catechesis we are beginning today: to grow in awareness of the great gift that God has given us in the Eucharist.

"The Eucharist is a marvellous event in which Jesus Christ, our life, makes His presence felt. To participate in Mass is to live once again the passion and the redemptive death of the Lord.

"The Lord is there with us, present. Very often we go there, we look at things, we chatter among ourselves while the priest celebrates the Eucharist… and we do not celebrate close to Him. But it is the Lord!

"If today the President of the Republic or someone very important in the world were to come, it is certain we would all be close to him, that we would want to greet him.

"But think: when you go to Mass, there is the Lord there! And you are distracted.

"It is the Lord! We must think about this. “Father, it’s just that masses are boring”. – “But what are you saying, that the Lord is boring?” – “No, no, the Mass, the priests” – “Ah, so may the priests convert, but it is the Lord Who is there!” Is that clear? Do not forget. “Participating in Mass means living once more the passion and redemptive death of the Lord”."

I attend Mass frequently at St. John Cantius in Chicago, where liturgy is ALWAYS in good taste! But more importantly, reverent and uplifting.

Now if only he would actually say something affirmative of the Latin Mass and Traditonalists (not radicals) in public instead of simply a lack of anything, or negative towards, those who love/partake in the EF Mass. It should be in his daily fervorinos or dare he do it, a General Audience. That however it too much to ask of him. Close yet no cigar.

You said the magic word, uplifting as in verticality as opposed to verses populum where those gathered around the table and the facing congregation emphasize the horizontal.

Right on the money!

Perhaps His Holiness Pope Francis will do say something positive about the TLM.

Imagine, for example, if Pope Francis were to declare to Bishop Rifan that the TLM is a treasure for the Church.

Imagine if Pope Francis were to grant blessings to the...oh, SSPX. Perhaps he will declare that Catholics who approach SSPX priests to receive the Holy Sacrament of Penance "shall validly and licitly receive the absolution of their sins."

Perhaps Pope Francis will recognize as valid and licit the "celebration of marriages of faithful who follow the pastoral activity of the Society."

Nah...Pope Francis traffics only in negativity in regard to "traditional" Catholics.

Early in his pontificate Francis told Italian bishops who complained about the availability of the EF to respect tradition.

In the last five years the TLM has made modest yet significant gains as bishops in E&W and the USA have supported it by deeds as well as words. In England, for example, four historic churches have been given to the FSSP and ICRSS and there are new Oratories in formation (the Oratorians celebrate both forms in a suitably reverent manner).

The Archbishop of Liverpool has conferred ordinations in the old Rite to the FSSP in Warrington and the number of bishops who have celebrated Pontifical Mass continues to grow. Since its formation in 1965 the Latin Mass Society has made a point of working with the bishops, even when times were least propitious. It has now paid off.

SP did not become a dead letter after Francis became pope, as many at PTB gleefully predicted back in 2013.

Hey, the first photo is of a Mass at my parish, St. John Cantius in Chicago! Near the tabernacle on the left is Fr. Dennis Kolinski, and on the right, Fr. Frank Phillips, Pastor. Fr. Joshua Caswell is the priest at the foot of the altar.

I hear they have a new video about the Canons Regular of St. John Cantius, but I haven't seen it yet. Check out the web site: http://www.cantius.org/

I don't know what the feast is, but they typically dress the altar this way during Corpus Christi, or 40 Hours Devotion (and maybe other times too I just am not remembering now.)

Nobody goes to the Vatican for Mass. They go to see the pope or to meet up with a homosexual lover.