PROPERS IN THE ORDINARY FORM FOR THE SOLEMNITY OF THE ASSUMPTION OF THE BLESSED VIRGIN MARY: DID ANYONE HEAR THESE TODAY AT LEAST IN PART?

You can view the Ordinary Form's Propers for the Solemnity of the Assumption of the Blessed Virgin Mary by pressing this sentence. Did you hear them? 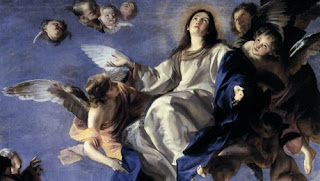 For my first OF Mass in quite some time, I traveled to a parish whose pastor celebrates the EF Mass, and therefore knows how to celebrate the OF Mass with dignity and reverence (as many or most OF-only priests do not).

No propers (nor sappy songs either), but the orations, dialogues, preface, etc were all chanted beautifully, all vernacular. The watered-down Novus Ordo Confiteor, but with all the appropriate bells and smells. Congregation chanted the Kyrie, Gloria, Sanctus, Agnus Dei using the Roman Missal 3e plainsong tones. Altogether, everything proper and rather beautiful.

Of course, the Roman Canon was used, today being a solemnity (this being a parish with a well-formed pastor whose people may hear no other EP if they attend only on Sundays and holy days).

But after each of the half dozen "Through Christ our Lord" conclusions in the canon--at the ends of the Communicantes, the Hanc igitur, etc--the whole congregation (not just the priest) responded with an audible "Amen". Curious, no?

We had a pretty simple Mass at Atlanta's Shrine of the Immaculate Conception---no Gloria, no creed, two readings (instead of the customary three), but some hymns too. In and out in 30 or so--of course all were invited back to other weekday Masses there, not just on holy days of obligation!

The first Eve was fashioned by God from a man, and this man we know as Adam. The Son of God, the new Adam, was fashioned according to God's plan from a woman, who we honor as the Blessed Virgin and the New Eve.
The first Eve was created without sin. The second Eve was conceived without sin.
The first Eve was created directly by God, from a man, without the aid of a human mother; the second Adam was created by God from a woman, the New Eve, without the aid of a human father.
The first Eve was seduced by the serpent and was complicit with the first Adam in bringing sin and death into the world. The second Eve never knew sin and would, being the obedient instrument and servant of the Divine Will, crush the head of the serpent.
The first Eve was driven from Paradise because of her disobedience to God. The New Eve would be first among those in the Heavenly Paradise because of her willing obedience to God.
The first Eve spoke her assent to a Fallen Angel and this brought sin and darkness into the world. The New Eve spoke her assent to a Glorious Angel and this would bring Salvation and the Divine Light into the world.
The first Eve disobeyed God and so her life would be one of sin and its deathly consequences. The New Eve, conceived immaculate and being ever obedient to God, would escape sin and its deathly consequences.
The first Eve is known as the Mother of the all who are Earthly born. The Blessed Virgin, the New Eve, is the Mother of All who are spiritually re-born.

The Holy Virgin, through the Grace and Power of God was without sin from the beginning. She in her physical body would not suffer the corruption due to the sin of Adam. The inseparable unity of her soul and body would remain. Being the spouse of the Holy Spirit and being possessed of complete and full correspondence to Divine grace, her body would be glorified. It was then only for God to draw her to Himself. By her unsurpassing response to His Divine love was she attracted to Him and by His ineffable love for her was she drawn up to Him. In In the Blessed Virgin is the template given us to imitate so that if we follow her example, we will one day follow her, body and soul, into the Celestial Paradise.

I have not been to a Roman Liturgy in a long time, so I did not, but I did hear the Troparion and Kontakion of the Dormiton of the Theotokos.

My husband and I attended the noon Mass at our parish. It was all spoken, vernacular of course, with one reading and gospel, no creed and EP 2. Needless to say, there were no propers. We did watch the morning Mass on EWTN was a very well celebrated OF Mass.

It's puzzling to hear of Masses celebrated on August 15 without the Creed, which the missal plainly is said on the Solemnity of the Assumption ("Dicitur Credo.") What kind of man spends years in the seminary without learning to celebrate properly--which minimally following all rubrics in the missal? As Fr. Z says--this is not rocket science, the Novus Novo is so rubrically watered down that a competent altar server should be able to learn it in 10 minutes or so.