JUST WHAT IS THE DYSFUNCTION IN THE IMPLEMENTATION OF THE ORDINARY FORM OF THE MASS? ONE POPE'S DYSFUNCTION SEEMS TO BE ANOTHER POPE'S FUNCTIONALITY 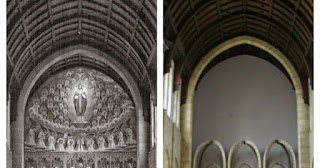 For the most part, in the pre-Vatican II's Latin Rite Church, the Mass was celebrated about the same way worldwide due to Latin and chant. There were three types of Mass, Low (no chanting of the Mass) High (the entire Mass chanted) and Solemn High with more choreographed ceremony and the use of deacon and subdeacon.

Chant and the quality of chant varied from parish to parish of course, given their resources. Some parishes where professional choirs and choir directors could carry out the singing of "concert" Masses during Mass by the great composers did so. However, some of these great masters secularized the Mass, meaning that melodies and style of singing set religious words to secular sounds of the day in the "vulgar" sense and removed the chanting of the Mass completely from the laity who appreciated what was being sung in a secular way, not necessarily a spiritual or contemplative way. (This occurs with many of the concert/ Broadway ditties sung today, secular sounds set to religious words that evoke emotions that are not necessarily spiritual or devotional.)

I don't know how many parishes in Europe would sing these kinds of "secularized" concert Masses but evidently it led Pope Pius X to kick start the liturgical movement of the early 20th century by emphasizing the proper chant of a sung Mass. The first part of this liturgical movement focused on chanting and making it accessible to the congregation and their actual participation.

Today it is possible to have a Mass with less chanting/singing or more chanting/singing and it all hinges on what the local priest wants or the particular celebrant of a particular Mass. In other words, it isn't like the pre-Vatican II Mass (EF Mass) where it is either all or nothing.

But on top of that even in all English parishes, the pastor and music director feel they have to accommodate the tastes and desires of the variety of English speakers there are which includes catering to different age groups--children, teenagers, young adults and the over-the-hill aging (those over 30).

So a parish might have a contemporary Mass (whatever that means in any given period, i.e. folk, polka, praise and worship, gospel and the like). This contemporary Mass would have a variety of instrumentation from piano to tambourine, but organ would be a no, no!

The parish also would have a traditional choir, which normally means the singing of traditional Catholic and Protestant hymns with a multi-voice choir and use of organ.

Then there might be a nod to Latin, Gregorian Chant and Polyphony.

Some parishes cater to the EF Mass folks too.

I don't tend to be that way, not that I am rigid in personality although I might tend to that given my traditional and conservative sensibilities, but also because I like unity in the parish and not divisive pluralism.

And for the most part, my parishes over the last 38 years have been relatively homogeneous, although my Augusta parish was well integrated with whites and blacks. There I did have a flourishing "Gospel choir" at our 12:30 PM Mass, but that fell by the wayside after I departed.

But in my last parish in Macon (for the 12 years I was there) and now in my current parish, each Mass was/is exactly the same in the style of singing and manner of the Mass. I chant all the parts of the Mass that pertain to the celebrant and the congregation chants their parts. The only difference is that our 11 AM Mass employs incense.

The only exception to this uniformity was the EF Sunday Mass in Macon and when I was there for the last five years, the 12:10 PM Mass was ad orientem for the Liturgy of the Eucharist and once a month an EF Mass and all knelt at the altar railing for Holy Communion. It was what I think Vatican II intended or how Sacrosanctum Concilium should have been implemented in the first place--but that ad orientem Mass for the OF Mass is no more, although kneeling for Holy Communion at the altar railing remains and the EF Mass once a month the last time I was told.

I have not tinkered with the selection of hymns that our choir director chooses. The hymnal which is new is a hybrid of contemporary and traditional hymns. Our people do seem to sing but our new church is heavily padded with acoustical materials to prevent an echo and so it is hard to tell sometimes how well the congregation sings given the "deadness" of the room for singing--although the spoken word is wonderful in this studio sounding church. St. Joseph in Macon as well as Most Holy Trinity in Augusta were lively echoing rooms, not studio sounding in any way, but the spoken word was a bit challenging especially in Augusta.

For those of us who are pastorally sensitive but have a traditional bent, it is a challenge to bring the liturgy to where we feel it should be without crushing those in the congregation that prefer what is the normal fare in most parishes today.

I have had parishioners tell me that if we don't become more like the non-denominational churches in our stye of music, meaning bands and praise and worship in a casual bring your coffee and donuts setting, we will continue to lose Catholics to the mega non-denominational churches around us. In fact a goodly number of Catholics have jumped ship to these churches for their lively music and fellowship, not just in Richmond Hill but throughout the Savannah deanery.

In Europe I have never encountered the mixing of vernacular languages in the Mass, although in places like London one can find Masses in languages other than English and Latin.

Last Sunday I found myself in Lucerne (German-speaking Switzerland) and visited the Jesuit church, probably the finest baroque church in the country. The Mass was a said one with traditional-sounding hymns (organ accompaniment) and the large congregation was attentive and reverent. Nothing to object to.

In August choirs tend to be stood down, but a glance at the noticeboard showed that next month one of the Masses features the music of Marc-Antoine Charpentier, with soloists and orchestra, and another uses sacred polyphony by English masters including Tallis, Byrd and Morley.

The fact that sacred music is taken seriously in German-speaking countries rescues a lot of their liturgy from the banality which is so widespread in Anglophone churches. By the way, Father, it would be interesting to know what your DoM does apart from choose hymns. Do you have a polyphonic choir? A chant schola?

It sounds like some in your congregation are not well trained in the Faith, but that's probably not their fault. At the same time the Liturgy was collapsing ("reformed") there was also a quick and decisive movement away from teaching the Faith. It was all about love, love, and love. Well I have a response to that: Atheists love, Protestants love, Jews love, etc. So if that's all you're selling, you've really have nothing to sell. I suspect that when reintroducing genuine Catholic worship you also have to tie that together with teaching the genuine Catholic Faith. I certainly do not envy you. You have an extremely difficult job ahead of you,

The problem is with the older folks, my age and older. From last September through May we had a twice a month lifeteen Mass with a praise and worship band (that wasn't bad in term so quality although some songs were simply vapid and sounded like stuff I hear in the morning over the radio that blares where I exercise). It was an additional Mass on Sunday nights. About 15 kids came and about 50 people my age. That tells you something I think.

But when I starting chanting my parts and added (did not replace hymns) the Introit, offertory and communion antiphons, people said to me no other parishes are doing this why are you? And in fact this is true, no other parishes do these things--although our Cathedral in moving in that direction with their excellent Director of Music/organist.

So often those of us inclined to read the black and do the red and do the Ordinary Form Mass as it is allowed and in fact should be done, are like reeds blowing in the wind.

I recall distinctly when the changes came, it was folks in their 40s, 50s, and 60s who seemed all agogue. Since the nuns had trained us to sing multiple Ordinaries in Latin, I couldn't see the need. If Vatican II had come 10 years later, the reform might have taken a different turn because so many of the young were being properly trained. I pray for you that you will be successful in re-invigorating the Mass at your new parish.

Are you surprised that the Jesuits are not liturgically illiterate? There is a saying 'about as useful as a Jesuit in Holy Week', which means of no use at all, but the principal Sunday Mass at the Jesuit church in Farm Street, Mayfair has always been in Latin, and the Jesuitenkirche in Prague does a splendid Latin liturgy.

People in the know often frequent Jesuit churches because of the quality of the preaching. The sermons of Gerard Manley Hopkins SJ are still worth reading and he was for a time curate at St Aloysius, Oxford - then the Jesuit church but now the Oxford Oratory, which I often attend.

John, Or "As confused as a Jesuit at high mass."

No, I was just asking if that was the Lucerne church to which you were referring. I have visited that lovely building.