WHAT ABOUT CARDINAL SARAH'S INPUT? DID HE KNOW THIS WAS COMING AND WHAT ARE HIS THOUGHTS? 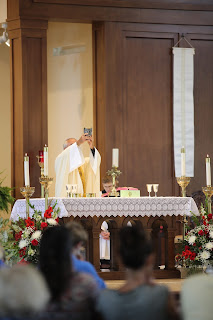 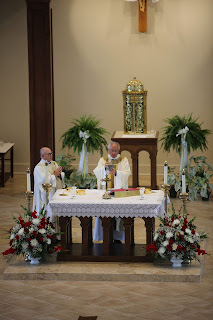 Rorate Caeli has more of the translation of Pope Francis' talk on the liturgy today. Praytell also has an interesting comment on it which has always been my position as there is no way that the Church would say that an Ecumenical Council was wrong, undo it, that Sacrosanctum Concilium was wrong, undo it, or that papal promulgation of the most authoritative types were wrong so let's undo it. Pope Benedict never endorsed such a thing either.

But this is what Praytell writes:

In his remarks declaring that the reform is “irreversible,” Francis seems to be signaling a couple of things.
In general, Francis seems to think that we don’t need more “reform” of our liturgies, but rather the on-going reform of the assemblies that celebrate those liturgies. As he says,“it is not enough to reform the liturgical books; the mentality of the people must be reformed as well.” Furthermore, the direction of that reform should be in continuity with the direction set in Sacrosanctum Concillium.

This is Rorate Caeli's more detailed account of the pope's talk:

There are two directly linked events, the Council and the Reform, which did not flourish suddenly but after long preparation. What was called the liturgical movement testifies to it, and the answers given by the Supreme Pontiffs to the hardships perceived in ecclesial prayer; when a need is sensed, even if the solution is not immediate, there is a need for it to be put in motion.

The Second Vatican Council made later to mature, as good fruit from the tree of the Church, the Constitution on the Sacred Liturgy Sacrosanctum Concilium (SC), whose lines of general reform respond to real needs and to the concrete hope of a renewal; it desired a living liturgy for a Church completely vivified by the mysteries celebrated.

The direction traced by the Council took form according to the principle of respect for sound tradition and legitimate progress (cf. SC 23) [9] in the liturgical books promulgated by Blessed Paul VI , well received by the same bishops who were present at the Council, and for almost 50 years universally used in the Roman Rite. The practical application, led by the Episcopal Conferences of their respective countries, is still ongoing, since it is not enough to reform the liturgical books in order to renew the mentality. The books reformed according to the decrees of Vatican II have introduced a process that demands time, faithful reception, practical obedience, wise celebratory implementation, first of all, on the part of ordained ministers, but also of other ministers, cantors, and of all those who participate in the liturgy. In truth, we know, the liturgical education of pastors and the faithful is a challenge to face ever anew. The same Paul VI , a year before his death, told the cardinals gathered in Consistory: "The time has now come definitely to leave aside divisive ferments, which are equally pernicious on both sides, and to apply fully, in accordance with the correct criteria that inspired it, the reform approved by Us in application of the wishes of the Council." [10]

And today, there is still work to do in this direction, in particular by rediscovering the reasons for the decisions made with the liturgical reform, by overcoming unfounded and superficial readings, partial receptions, and practices that disfigure it. It is not a matter of rethinking the reform by reviewing its choices, but of knowing better the underlying reasons, even through historical documentation, of internalizing its inspirational principles and of observing the discipline that governs it. After this magisterium, after this long journey, we can affirm with certainty and with magisterial authority that the liturgical reform is irreversible.

The task of promoting and guarding the liturgy is entrusted by right to the Apostolic See and to the diocesan bishops whose responsibility and authority I rely on very much at the present moment; National and diocesan liturgical pastoral bodies, training institutes and seminaries are also involved.

Among the visible signs of the invisible Mystery there is the altar, a sign of Christ, the living stone, rejected by men but it has become a cornerstone of the spiritual building where worship is offered to the living God in spirit and truth (cf. 1 Pt 2.4; Eph 2:20). Therefore, the altar, at the center toward which our churches converge, [11] is dedicated, with chrysm, incensed, kissed, venerated: towards the altar, the eyes of those praying, the priests and the faithful, are called together by the holy assembly around it [the altar]; [12] Upon the altar is placed the Church's offering, which the Spirit consecrates to be a sacrament of the sacrifice of Christ; from the altar the bread of life and the cup of salvation are bestowed upon us "for we become one body and one spirit in Christ" (Eucharistic Prayer III).


[9] The reform of the rites and the liturgical books was undertaken immediately after the promulgation of the Constitution Sacrosanctum Concilium and was brought to an effective conclusion in a few years thanks to the considerable and selfless work of a large number of experts and bishops from all parts of the world (Cf. Sacrosanctum Concilium, 25). This work was undertaken in accordance with the conciliar principles of fidelity to tradition and openness to legitimate development (cf. ibid . , 23); and so it is possible to say that the reform of the Liturgy is strictly traditional and in accordance with “the ancient usage of the holy Fathers” (cf. ibid. , 50; Institutio generalis Missalis Romani, Prooemium, 6). ( John Paul II , Lett. Ap. Vicesimus quintus annus, 4).

[10] "The pope’s attention is drawn today once more to a particular point of the Church’s life: the indisputably beneficial fruits of the liturgical reform. Since the promulgation of the conciliar Constitution Sacrosanctum Concilium great progress has taken place, progress that responds to the premises laid down by the liturgical movement of the last part of the nineteenth century. It has fulfilled that movement’s deep aspirations for which so many churchmen and scholars have worked and prayed. The new Rite of the Mass, promulgated by Us after long and painstaking preparation by the competent bodies, and into which there have been introduced-side by side with the Roman Canon, which remains substantially unchanged, other Eucharistic Prayers, has borne blessed fruits. These include a greater participation in the liturgical action, a more lively awareness of the sacred action, a greater and wider knowledge of the inexhaustible treasures of Sacred Scripture and an increase of a sense of community in the Church. The course of these recent years shows that we are on the right path. But unfortunately, in spite of vast preponderance of the healthy and good forces of the clergy and the faithful, abuses have been committed and liberties have been taken in applying the liturgical reform. The time has now come definitely to leave aside divisive ferments, which are equally pernicious on both sides, and to apply fully, in accordance with the correct criteria that inspired it, the reform approved by Us in application of the wishes of the Council." (Alloc . Gratias ex animo, June 27, 1977: Teachings of Paul VI, XV [1977], 655-656, in Italian 662-663).


[12] "Around this altar, we are nourished by the body and blood of your Son to form your one and holy Church" (Rite of the Dedication of an Altar, n. 213, Preface).

Good question. First of all, I think this is the most Pope Francis has ever said about the Roman liturgy. Second, I think Cardinal Sarah would agree that the 20th century reform was needed, and that the reforms do need to be internalized. I doubt, however, that Francis bothered to discuss any of this with Sarah. As for the liturgical books, even the ones issued after Trent were repeatedly updated in minor ways, so surely the Holy Father does not think the 2002 missal is definitive. Even if he does, he can hardly claim that a particular missal is divinely inspired. At any rate, SC does mandate both Latin and Gregorian Chant, so perhaps the process of internalization must include congregational openness to these elements.

It made me chuckle a bit when I read that Rorate said that this was like Quo Primum for the Novus Ordo . . .

Liturgists (and by this I mean genuine liturgical scholars) do not believe it is possible or desirable to implement a ROTR which would synthesize the Missal of 1962 (which is essentially the Tridentine Rite) with that of 1970. What would we end up with? It would be closer to 1967 than 1964.

Another factor is that the number of options in the Novus Ordo means we are not dealing with a single rite, but what is in effect a multiplicity of rites under the same umbrella, made even more diverse by the babel of vulgar tongues wherein these rites are delivered.

The principal and massively popular Sunday Mass at the London Oratory is according to the Novus Ordo. It is sung in Latin, with deacon and subdeacon, ad apsidem at the high altar (the church is oriented north-south). The introductory rite is, as far as I know, unique. The Asperges is part of the entrance procession and is followed by the older prayers, beginning 'Ostende nobis Domine ...', which are chanted facing the people. The ministers then ascend to the altar, venerate it and incense it while the choir sings the Introit. The Kyrie follows immediately.

The first reading is done by a cleric in choir dress (usually the MC) and the epistle and gospel by the subdeacon and deacon. They are said in English, but on major feasts the gospel is sung in Latin. The interlectionary chants are from the Graduale Romanum.

Credo III is sung alternatim by choir and congregation. There is no offertory procession or sign of peace. Communion is received in one kind, kneeling, and the vast majority receive on the tongue. The concluding rites are done at the altar, not from the sedilia.

Nowadays the Roman Canon is invariably used; in the past EP III was occasionally heard (but in Latin, of course).

ROTR? Not a bit of it. When the NO came in the fathers had to reconcile it with the Oratory's famed liturgical and musical traditions, and they succeeded admirably. One important principle was the retention of Latin for all solemn services, which makes (say) the Easter Vigil a sublime and uplifting experience.

Perhaps Pope Francis is implying that the liturgical reform is not only irreversible, but also irreformable.

From the inimitable Fr. Hunwicke:

All over the world, cathedral and church sanctuaries are being freed from the worst of the mistakes of the 1970s. And Pope Francis, in his latest address, includes a fine section explaining the importance of this instinctive respect for the Altar. (Might it perhaps have been written for him by Cardinal Sarah?) And, while I am on this subject, I will remind you of the Holy Father's Address at the general audience of August 2, when he spoke about the liturgical significance of facing East. He lamented that "in modern times, the fascination of this rite [facing East in Baptism] has been partially lost: we have lost sensitivity to the language of the cosmos". (Might he perhaps have listened to Cardinal Sarah?) Traddies should not always too readily assume that everything Jorge says is the blackest villainy.