WHERE'S THE ANATHEMAS? A PASTORAL ECUMENICAL COUNCIL AND NEW EMPHASIS ON ACCOMPANYING SINNERS OUT OF A PASTORAL CONCERN LEADS CATHOLIC BISHOPS TO BE WIMPISH ON MORTAL SIN AND ETERNAL DAMNATION--WHERE ARE THE PUBLIC AND PRIVATE EXCOMMUNICATIONS AND ANATHEMAS FOR CATHOLICS WHO BELONG TO HATE GROUPS? 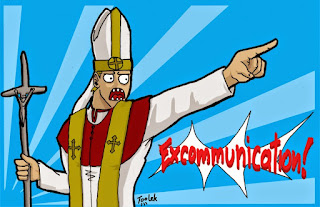 Once again we see Catholic bishops wringing their hands over white racism and hate groups like the KKK and neo-Nazis. But why in the name of God and all that is holy are there not local bishops and groups of bishops issuing anathemas and public excommunications to those Catholics who actually belong to these kinds of groups and warning everyone that those who belong to these groups, Catholic or not, are going hell?

Vatican II, a pastoral, not dogmatic Council, which issued no anathemas whatsoever although there was plenty of fodder in the 1960's to do so and the subsequent development pastoral theology into a form of a new rigid doctrine or dogma has done great harm to the Church.

And this applies to Catholic politicians who support abortion on demand and promote ideologies contrary to the Church's clear teachings on sexuality and marriage.

But where are these public excommunications that only local bishops can perform and the Vatican should encourage?

We don't need academic statements coming from our bishops on hate groups and wringing our hands and lamenting their existence. We need sort, terse and direct condemnation and letters from our bishops that are short and to the point to be read at every Mass in particular dioceses.

Doesn't the Code of Canon Law (1983)set forth the specific grounds for excommunication? If so, is belonging to a reprehensible, disgusting political group, or espousing reprehensible, disgusting political views, without more, grounds for excommunication under the CIC? Cannot the "concept of excommunication" in these circumstances be used by the Obama Democrats in the Episcopate be to deprive one of their First Amendment Rights as is already being done with "political" correctness. Wouldn't it be better for Bishops to call on everyone to break out their rosaries and pray for the conversion of those poor souls, instead of seeking headlines regarding "excommunications" which may not be enforceable per the CIC?

I am not sure of the intricacies of public excommunication. In the past it was reserved for Catholics who publicly went against his/her local bishop's decisions about certain moral issues, for example a Catholic politician in New Orleans in the late 50's or 60's that publicly oppose the Archbishop who was integrating the Catholic schools. He was excommunicated publicly and then he repented and was publicly reconciled. the bishop is required, though, to meet with the person to counsel him and convince him to turn away from his disobedience.

However, the Church has private excommunication which only the sinner knows about normally. A woman who has an abortion, the husband or boyfriend or family member who counseled it and brought the woman to the clinic and the ones who performed the abortion and were complicit in it.

I like your last sentence the best. This past weekend and on Assumption the simple intercession I had at Mass about all of this was:

For the conversion of those who promote hate and violence, we pray to the Lord (or in the case of the Assumption Mass "...Holy Mary Mother of God (response)Pray for us!

From EWTN: A latae sententiae excommunication is one that is incurred by the law itself, thus, in a sense, automatically, without any degree or decision of a bishop or Tribunal judge. Such an excommunication is incurred simply by doing some act freely, knowingly, and deliberately, and with certain conditions being met (e.g., a person must be over the age of 16).

A LS excommunication may or may not be private. The circumstances can, in some cases, be widely known, if not notorious.

Were a bishop to ordain a man a bishop publicly without Rome's approval, LS excommunication in incurred and there are likely many, many witnesses.

Father M., I was wondering if I should look to Nancy Pelosi for moral guidance? She says the Confederate statues in the US Capitol are reprehensible. But I think this is the same Nancy Pelosi who has a 100 percent pro-abortion voting record (a prerequisite to holding a leadership position in the national Democratic party). Is it therefore OK to ignore her statements on such statues?

Also, Stacey Abrams, one of the Democratic candidates for governor here in Georgia, wants the Confederate memorial (Lee, Jackson and Davis) sandblasted off Stone Mountain. She also has a 100% pro-abortion voting record and like the Nancy above, supports gay marriage.

Am I wrong to get the feeling that some on the Left are becoming the modern-day iconoclasts?


For the conversion of those who promote hate and violence, we pray to the Lord (or in the case of the Assumption Mass "...Holy Mary Mother of God (response)Pray for us!

The above is good because it covers both those on the right and on the left. Keep in mind that it is those on the left with Occupy Wall Street, Antifa and Black Lives Matter that have perpetrated pretty much all of the assembled crowd violence over the last two years.

"Keep in mind that it is those on the left with Occupy Wall Street, Antifa and Black Lives Matter that have perpetrated pretty much all of the assembled crowd violence over the last two years."

Ever watch the drunk "sports fans" duke it out at football and hockey games?

And they're fighting over a GAME.